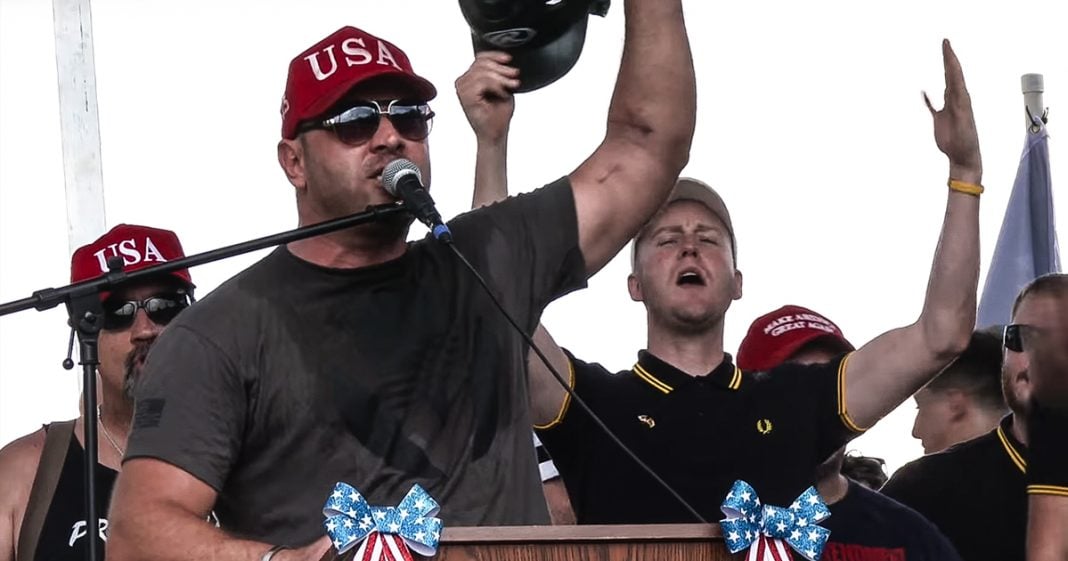 The leader of the Proud Boys wants to rebrand his group as one that is explicitly antisemitic, making it clear that this has always been the identity of those within the group. This is the same group that Donald Trump told to “stand down and standby” during the debates, and now they are taking off their mask and admitting what they truly are. Ring of Fire’s Farron Cousins discusses this.

So this week, one of the leaders of the proud boys, a dude by the name of Kyle Chapman, uh, who is the founder of the tactical defense arm of the proud boys, uh, his group is the one that shows up at the protest. They’re the ones that instigate, you know, try to cause violence and mayhem. Uh, mr. Chapman was using an encrypted app called telegram, uh, sending messages to other proud boys saying they need to reclaim the group. You know, they need to take over AOS, the current leadership, which was a man by the name of Enrico. Tario, uh, Enrique Tario excuse me. And basically make sure that everybody knows that this is an organization that is about white supremacy and antisemitism. That’s what mr. Chapman wants the proud boys to be known for proud boys. The people that Donald Trump told to, you know, stand back and stand by during a presidential debate.

And then later on claimed, Oh, I’ve never heard of these people. I have no idea what’s going on. Who are they? Now? We knew who they were. And that’s what Kyle Chapman is trying to say. People know who we are. We need to embrace it. We need to let people know that this is in fact, our identity. We need to stop hiding from it. We need to be this thing that everybody already knows we are. So there should be no doubt left in the minds of anyone watching this. What the proud boys are really about. This is not just some conservative group that shows up and does things at protests. They’re not just a group that supports Donald Trump. There are a group that believes that white people non-Jewish, people are the best that’s, that’s what they believe. That’s what they want their brand to be. That’s what they want people to think when they see them.

And that is what mr. Chapman is trying to do. That’s why he’s staging, I guess this internal coup because Chapman is not the current leader overall of the proud boys. He is one of the leaders, as I mentioned, but he doesn’t have control of the whole organization. So I guess the proud boys are at a logger heads, right? You got to figure out, are you going to be the antisemitic group or are you going to be the tactical weirdos who are still threatened law enforcement officials? And even the FBI admits you’re a threat, but not, I guess, necessarily racist or you just going to drop that veil and say, you know what, an we’re racist too, got all the worst elements of America shoved into one group there. That that’s what the proud boys would be becoming if they embrace mr. Chapman. And I’m not saying that if they don’t embrace mr. That they’re not those things, it’s just, they’re not necessarily wearing it on their sleeve. Chapman quite literally wants them to do that. And that’s what the proud boys are. And that’s why it was so important for Donald Trump to disavow the group. But he was unable to do that, stand back and stand by. Hmm. Well, these are the people you’ve chosen to hit your wagon to so good luck with wherever they’re taking you.