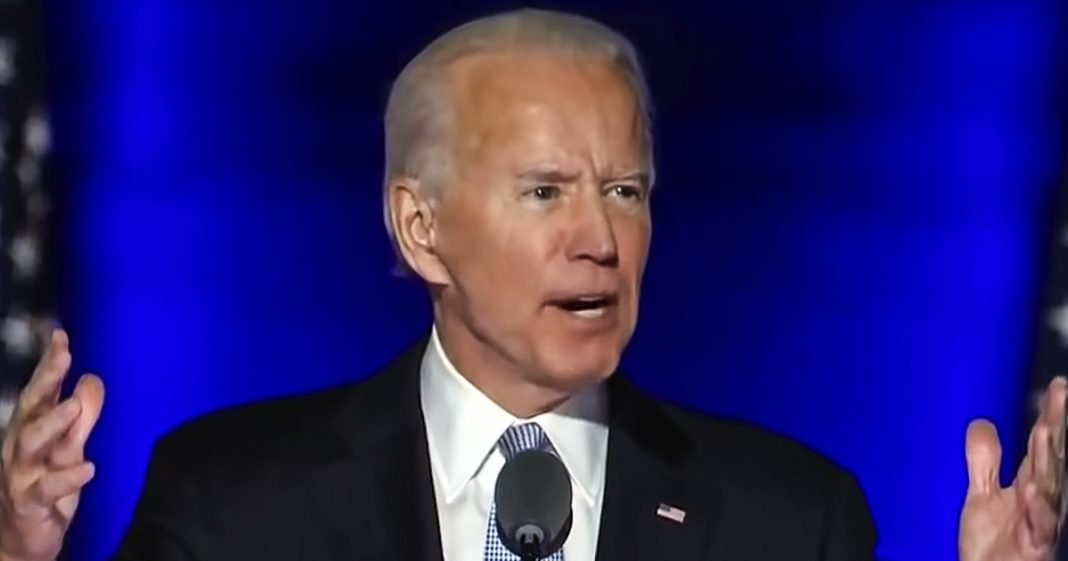 Nearly 80% of Americans now say that the 2020 Presidential election is over and that Joe Biden beat Donald Trump to claim the victory. This new poll is significant because it tells us that the ongoing fraud campaign from Republicans and conservative pundits is not working at all, and the public is ready for Biden to be declared the winner so that we can all move on. Ring of Fire’s Farron Cousins explains what’s happening.

According to a new Reuters poll this week, nearly 80% of people in this country understand that the election is over and Joe Biden beat Donald Trump. So no matter what Trump and his campaign are telling us, and I know Trump is still on Twitter saying I won. I won 80% of the public says, no, you didn’t. In spite of the fact that we have Republican politicians from both the house and Senate, hang this thing, ain’t over yet. Let’s let the process play out. 80% of the public says, no guys, it’s over. I mean, y’all keep counting votes where nobody’s arguing that you shouldn’t, all we’re saying is these lawsuits are frivolous. The lawyers that are filing them say, so the judges who are tossing them out say so. And apparently according to reports behind closed doors, even Trump says, so we know the thing is over. So can we just move on as a country? Good. God, 2020 has been bad enough. We don’t want to have to keep reliving this election every day for the next couple months, we’re ready to move on. Here’s what the poll found, uh, ran from Saturday afternoon to Tuesday.

So that’s actually very telling this, this, uh, you know, Saturday, Saturday Week and a half removed from the election in this poll began before we were even a week away from the election. So that should tell you a lot. Uh, it found that 79% of us adults believe Biden won the white house. Another 13% said the election has not yet been decided. 3% said Trump won and 5% said they did not know. So if we take those numbers, if we take the 3%, who said Trump won and the 5% who said they don’t know. Even if we add those together, we have 8% Go get on Twitter, go look at the Responses to any of Donald Trump’s tweets. You’re going to get a skewed perception that is going to make you think that an overwhelming number of people in this country think Trump won. That’s not the case. Folks, the people out there with the, the boat parades with the big Donald Trump flags hanging off the back of their oversized pickup trucks, you know, cause they’re overcompensating for something. Those are not a majority of people they’re barely even qualified as a minority because the numbers are so low as to be non-existent statistically That’s right.

Truth. And that is the truth that we have to accept. Okay? Yeah. 71 or 72 or 73. However, many the numbers up to now million people voted for him. Yeah, that’s true. But that doesn’t mean that, that 73 million people driving around with big Trump flags hanging off the back of their truck, we know that this country is about half conservative. Those numbers are not shocking. That was not an embrace of Donald Trump, but it was, it was an embrace of tribal team sports politics. That’s what it is just like with most of the Democrats who voted for Joe Biden, it’s all team sports. Now it’s not about issues anymore. It should be, but it’s not. It’s about left versus right. Whether you get the win or the loss, what you do in between doesn’t matter. It just matters what you do, you in the game.

And the game is either a win or loss. It is a zero sum either get it or you don’t. And that’s the problem with American politics. But for right now, this poll gives us a little bit of hope, right? Cause it shows that these Republican talking points are not working. You know, even though Fox news is trying to tell us all, all the live long day that, Hey, this thing ain’t over, we don’t know who won again. Republican politicians, Ted Cruz, Marco Rubio, uh, Carl Rove, not a politician, but just as disgusting out there telling us this thing. Ain’t over Trump declaring on Twitter. I won which he did again yesterday, the public isn’t buying it. And that should at least give us a little bit of hope for the future.