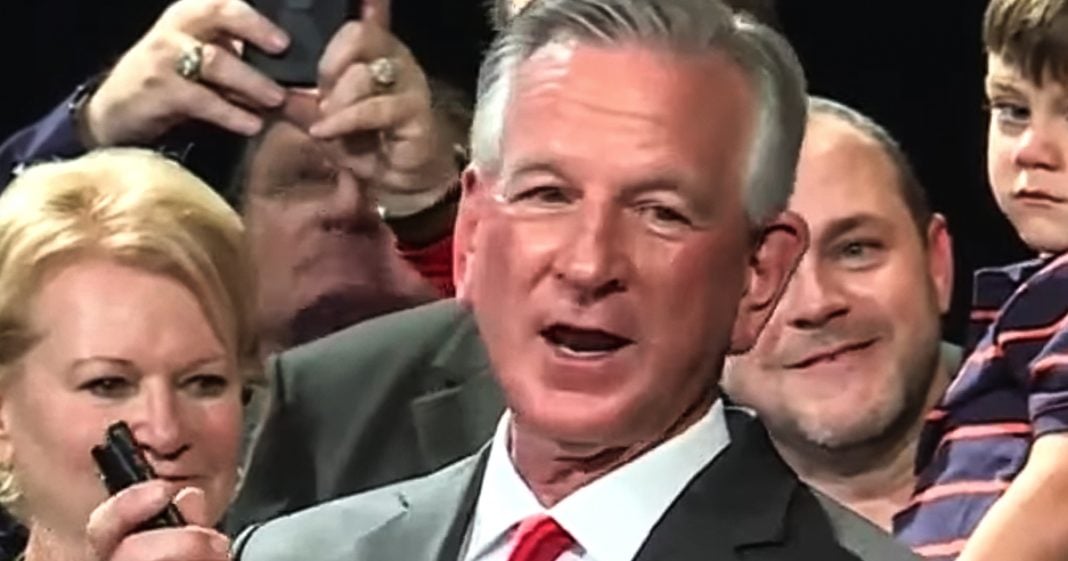 Tommy Tuberville, the incompetent college football coach who will now be the next U.S. senator from the state of Alabama, said in an interview this week that America entered WWII in order to fight socialists in Europe, which is the exact opposite of what actually happened. Tuberville is too stupid to be a senator, and his statements should give everyone in Alabama second thoughts about what they’ve done. Ring of Fire’s Farron Cousins discusses this.

Folks, I’m beginning to think that when Alabama sends us their politicians, they are certainly not sending us their best to Washington DC. Uh, latest example of that is Tommy Tuberville, the new Republican Senator elect, who is going to be replacing the Republican Lite Doug Jones, uh, in just a couple months in Washington, DC. Uh, Tommy Tuberville is somebody I’ve spoken about at length here on ring of fire, because as a Auburn football fan, I’m very familiar with Tommy Tuberville and how he handles tough situations. And he sucks. But this week we also found out he’s a total moron, uh, in an interview, mr. Tuberville, did he had this to say about socialism and world war II? He said, it’s concerning to me that a guy can run for president of the United States and have an opportunity to win. When he leans more to a socialist topic, government, you know, one payer system and healthcare raised taxes 20% when the other half the country is basically voting for freedom, let us control our own lives. Stay out of our life. You know, as I tell people, my dad fought 76 years ago in Europe to free Europe of socialism.

Okay. Now, one of the things that I have discussed about Tommy Tuberville was the disgusting nature of the ads that he was running. Uh, again, as I’ve repeatedly said, we are about 10 minutes, maybe from the Alabama state line. So our TV viewing area for our local news channels or local channels, whatever you want to call them, uh, picks up all the Alabama ones. So when Alabama politicians run ads, the air on our TV is down here too. During the campaign, we were inundated with ads from Tommy Tuberville, talking about these, uh, socialists. Doug Jones was, he was a socialist. Every Democrat is a socialist socialism, socialism, socialism, socialism. So that’s why this moron is talking about it again Again. Um, and I understand Alabama Voters are low information voters. I know, Oh my God, ah, I can’t say horrible things about this. Listen, folks, you come spend some time down here and you tell me that it’s not politically correct to say that these are low information voters. That’s not an insult. That’s an accurate description of what they are.

They’re being manipulated by these con men con men like Tommy Tuberville. Who’s only lived in Alabama for 18 months after being away from the state for years, crying about socialism saying we fought in world war II in Europe against socialism. We fought on the side of the socialists. You dumb . We fought against right-wing fascism fascism. That’s what we fought Against. That’s That’s what that’s what Hitler was. That was fascism Idiot. But he doesn’t to know that because His base doesn’t have to know That I Had spent men a Whole hell of a lot of time in the Great state of Alabama. It’s a beautiful state. The people are genuinely nice people for the most Apart, politically. However, they’re very backwards. We’re talking About a state that has extreme poverty, according to the UN worse than most third world countries in the state of Alabama. And if you drive through there, if you spend some time in there, I S uh, last year, uh, 2019, I spent a lot Of time in Alabama. It’s bad. It really truly is like going into a different country and you feel for these people.

And the problem Is they elect people like Tommy Tuberville. Who’s going to go to DC. He’s going to vote to give corporations bigger tax breaks. He’s going to vote to let more corporations come into his state of Alabama and pump more toxins into the air. Put more toxins into the water, destroy the way of life of these people make their situation so much worse than than six years from now, when he’s up for reelection, he’s going to go back on the air and say, listen, these Democrats are socialists. They’re socialists, and socialism is scary, And he’s going to win re-election If he wins, if he doesn’t the next Republican in lineup, I don’t know why. I don’t know how it always works, but it always works. And the only conclusion is that these are low information voters. They don’t pay close enough attention to politics. And the reason for that is not because they’re stupid. It’s not because they’re disinterested. It’s because they actually have real problems that they have to deal with in life in their communities. And to be honest, neither party is paying attention to them. Neither party is lending a helping hand to these people.

Maybe if they were, maybe if they did these voters, wouldn’t be so afraid of that socialist boogeyman that Joe Biden, wasn’t running on a socialist platform. Doug Jones, wasn’t running on a socialist platform. Tommy Tuberville, the moron from Alabama doesn’t even know what socialism is, Is that Voters in the state of Alabama could certainly benefit from a healthy dose of socialism in their state, might be able to pull them out of that extreme poverty that the UN says exists all over there, that our own eyeballs tell us exists all over. They need help. They don’t need ridicule. They don’t need scorn and derision. So please don’t take any of this as me attacking those Voters. It’s not Pointing out the deficits that they have and what we can do to make them better. But people like Tommy Tuberville, they depend On these people having such horrid living conditions because Every six years, every two years, whatever it is, depending on whatever office you’re running for in Alabama, you get to come back out there. And even though Republicans have had a death grip on that state for well over a decade, they’ll still tell these people that the reason they’re struggling and the reason they’re suffering is because of Democrats who haven’t had control of that state For near 20 years.