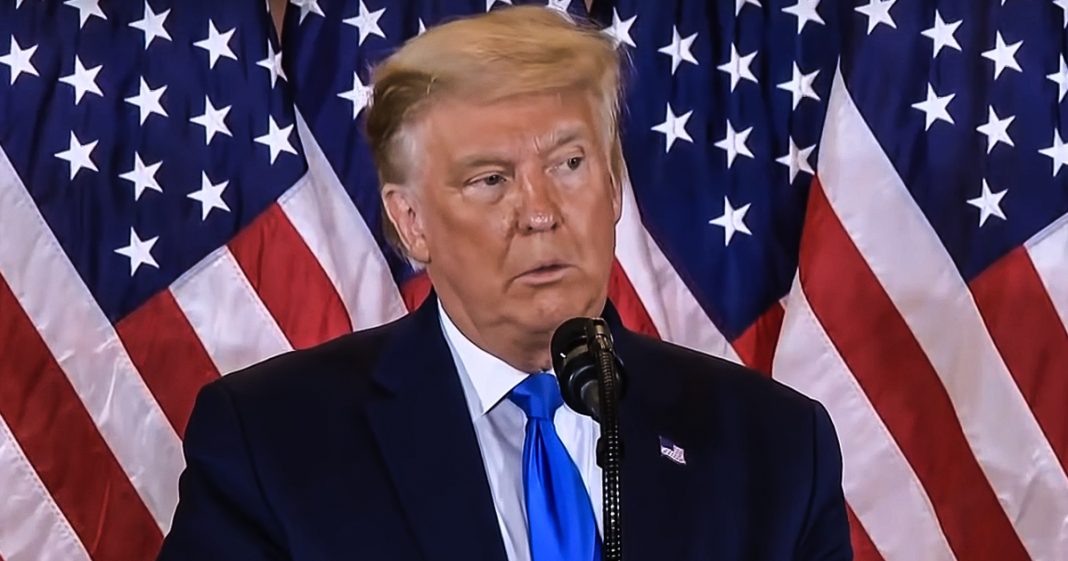 According to reports, some White House aides have told reporters that Donald Trump is well aware of the fact that he lost the election to Joe Biden, but he’s continuing to fight the results as a form of “theater” for his base. To put it another way, Trump knows that his base will view him as weak if he concedes to Biden, and he thinks that being a whiny baby is going to make him appear more manly. Ring of Fire’s Farron Cousins discusses this.

According to multiple different reports from NBC news, Washington post, uh, you have white house staffers and aides who are telling reporters at these outlets. That Trump is well aware of the fact that he lost. And he knows that his election challenges aren’t going to go anywhere. But according to these aides and staffers, he feels like he owes it to his base to fight, right. He can’t just concede the election because then his base who view Trump as some kind of overweight hairpiece wearing orange outfit, a male, um, though view him is weak at that point. Um, because I guess apparently they’ve never looked at him now. Here’s the thing thing I don’t understand. I’ve never understood why anyone and we know that they do this, but they look at Donald Trump and they say, this is, this is peak male performance. This is what it is. This is all of it. How, how, what am I since when is anything about Donald Trump and his oversized ties and his oversized belly and his over quaffed hair. When is that considered manly?

And I’m not here to body shame anybody, but my God, this guy spends more time trying to hide what he truly is. Just embrace it. Your bald happens to the best of us, dude. Sometimes it happens to the best of us at 19 years old, but guess what? It’s actually calls from an overabundance of testosterone. So it’s almost more manly, right? Embracing it. Dude, let it be. Nevertheless, he feels like he has to go out there and fight because he can’t be seen as weak because maybe he’s going to run again in 2024. If his ticker keeps, keeps going and allows them to do that. Uh, which I don’t know that that’s even, that’s a little iffy, but here’s the thing. I don’t buy this. I don’t buy for a second. That Trump feels that he owns is it to these people? What are you? These people is lower. Prescription drug prices. What he owes them is a cleaner environment. What he owes them is bringing their kids back from a war, which he said repeatedly he’s going to do. And then he doesn’t do it.

He doesn’t care that he owes them things and he would never even pay those debts if he did owe them because he doesn’t pay his debts. We know these things are true. It’s about the weakness. It’s about him refusing, not just to be seen as the weak one who has to concede, but as the loser, his narcissism will not let him do that. So we’re stuck between a rock and a hard place at this moment. 80% of the country understands that Donald Trump didn’t win this election. And that it’s time to move on. In fact, only 3% of the public says he did. When

It’s time to move on, you’re starting to see cracks. You’re seeing cracks in the Republican wall of no, no, no. Let the process play out in every now and then you get one. Well, I’m going to go ahead and congratulate Biden. He got this because he did get this Trump didn’t so you can make whatever kind of excuses you want. But at least the bottom line is you’re willing to admit that he knows it’s not going to work now, admitting it is just the first step to recovery. The second step is for him to, for once in his life, act like a grown-up and do the mature thing, which I’m sure as we all know is literally never going to happen. So buckle up. It’s going to be an unpleasant couple of months until Joe Biden gets sworn in.