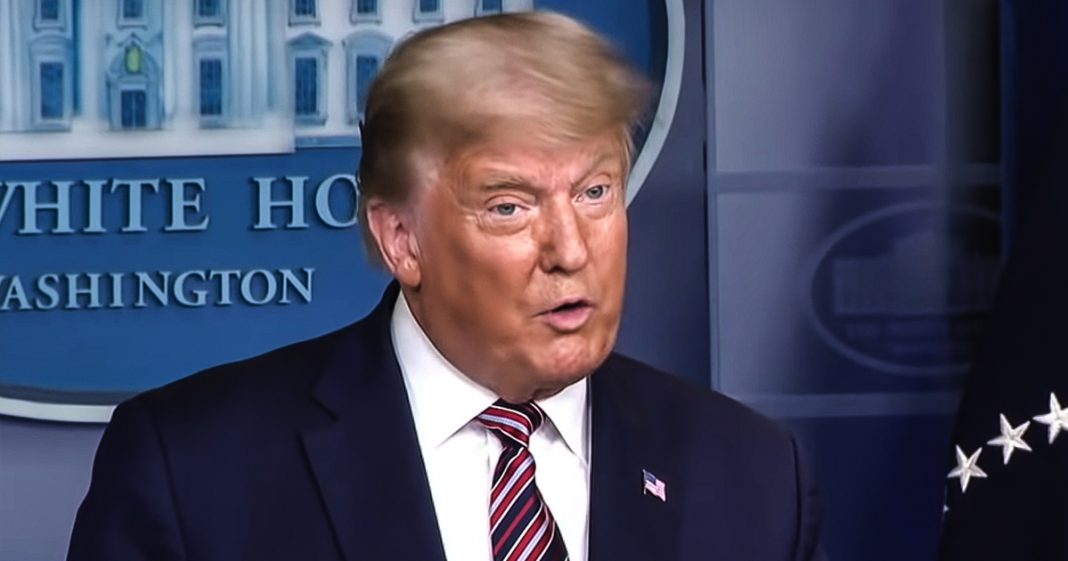 Donald Trump knows how to rile up his low information base, and that’s exactly what he’s doing with his claims of voter fraud and election manipulation. His followers have already become increasingly angry and violent over these claims, even though there is absolutely no evidence to back them up. Ring of Fire’s Farron Cousins explains what’s happening.

Donald Trump may not be able to do much in terms of actually producing evidence of voter fraud. But what he has been able to do is convince his base that voting fraud or any kind of election irregularities were so commonplace that this election was stolen from him. Now he has been laying the framework for this since long before the election even happened. But now that the vote is over with now that he is losing substantially, uh, and each day he actually starts losing by more to Joe Biden. He’s trying to tell his base that this isn’t real, none of this actually happened. I won, he tweeted it out again yesterday, claiming that he won. So what is his base do with this information? I will see what the courts do with this information. They toss it out because there’s nothing to back it up. The base doesn’t care about facts.

The base doesn’t care that all of this is fictitious. He could tell them that the sky is purple. It would forever go the rest of their lives. Believing that the sky is purple and that it was never blue. I, this is straight up or Welly and stuff we’re talking about here, but that is the hold he has over these people. And it hasn’t gone unnoticed with law enforcement here in the United States, law enforcement agencies, local police departments. And even the FBI have told reporters this week that they are concerned that these Trump supporters are going to grow angry and violent. And in fact, in a few instances, they actually have seen Trump’s supporters turn violent overclaims of the election being stolen from Trump. Now, see, that was the goal. All along Donald Trump knew that he wasn’t going to win with the legal challenges, you know, uh, with his constant whining though, those weren’t actually going to be things that were going to give him the majority.

So what can he do? He can sew chaos here in the United States. Now, as I said, extensively yesterday, there’s nothing this man can do that is going to prevent him from losing office in January. Uh, there is one small thing, and we’re going to talk about that a little bit later today, but, uh, even that is such a low probability is not to even matter. But what he can do is create a sense of mistrust from the very beginning of any Biden administration, convince every Republican out there, 70% of them right now believe that the election was not fair and free. That’s a terrifying statistic. So we are left with angry Trump supporters, more and more videos are coming out of Trump supporters, lashing out angrily, uh, tempting people to, you know, touch me, touch me, Jerry, to touch like they they’re looking for a fight.

They’re looking for an outlet for their anger, these insecure individuals who put all of their eggs in the Donald Trump basket only to find out that the basket had no floor. The basket had a snake in it that ate all the eggs, but they’re off, but not at Trump. They’re off at everybody else. So the best advice I can give at this point is do not engage. It may seem fun. It may seem tempting, but these people are dangerous. The FBI is telling you, these people are dangerous. It’s not worth getting a good aha. I got you video to post on social media, you know, is that worth getting shot? I don’t think so. So let’s, let’s not engage with these individuals on the street. Let’s not, you know, walk up to them and try to them off further. These are dangerous individuals and they need to be treated as such.

Don’t engage with them at all. And again, it’s not just coming from me. That’s what law enforcement officials are telling us because they’re afraid that further provocation is going to lead to chaos. Today’s video sponsors is privacy, and right now they have a wonderful offer for all of our ring of fire. Viewers, go to privacy.com/r O F sign up for your privacy account and you will receive $5. privacy.com. Their service is absolutely one of the most vital in an online world today, especially during the pandemic, everyone is encouraged to stay home. So we’re ordering more things online. And so your bank account information is more vulnerable than ever. Privacy gives you security. This is a product that I use all of the time. And here’s why if you have ever had your bank account information stolen, if it’s been part of a data leak, that is a massive headache, trying to get your money back, trying to repair your credit.

Privacy helps take away some of that concern. What privacy does is it provides a browser extension, or you can go right into the website or into the app and it can create a virtual bank account or credit card number. It can be a temporary number that only is used one time, or it can be merchant specific, meaning you can create a bank account, a card that only works for one particular website. So if that account happens to get hacked or, or has a massive data breach that card number no longer works with any other website, that is how privacy helps protect your bank account information in an increasingly insecure online world. So again, go to privacy.com/rof. You get $5 free just for signing up, or if you don’t want to type it in, just click the link at the top of the video description below.