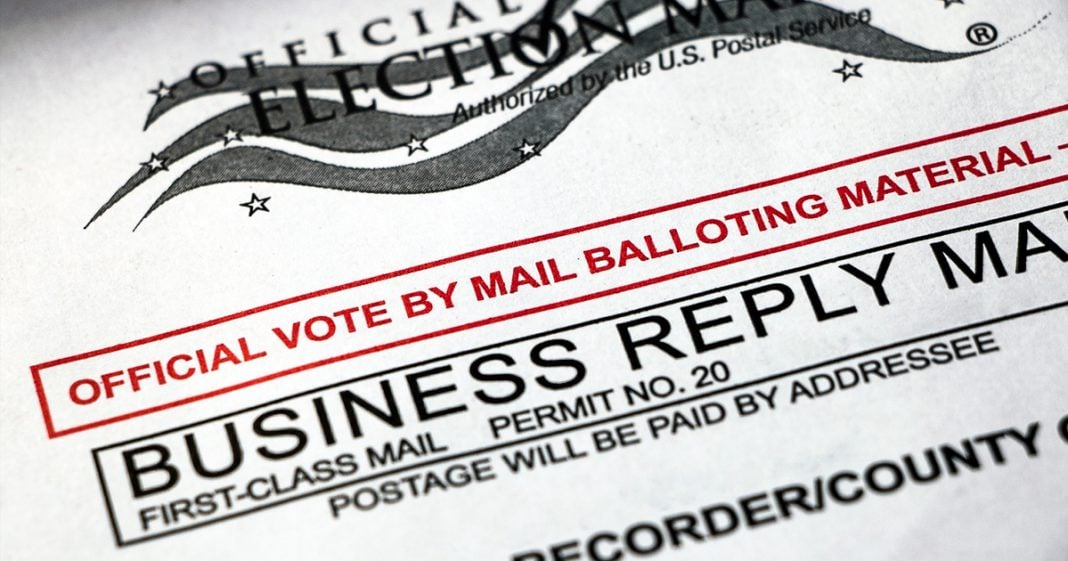 The postal worker who Republicans had cited as proof that widespread voter fraud exists has recanted his story to authorities, but not before Republicans managed to raise more than $130,000 for him. The Republicans have to be the easiest group on the planet to swindle, and this so-called “whistleblower” is actually still trying to run a scam on them while cooperating with the feds. Ring of Fire’s Farron Cousins explains what’s going on.

Donald Trump is still on his there’s so much voter fraud bandwagon. The rest of the Republican party appears to be joining him on there. And in the early days of these claims, one of the cases that they were touting, the Trump campaign campaign spokesperson, Richard Murtaugh’s specifically cited. This case was a case of a man named Richard Hopkins, a postal worker in Pennsylvania, who swore in an affidavit that the postmaster for his vicinity ordered postal workers to backdate mail in ballots so that it would appear as if they came in prior to election day, massive fraud. Right. And he has Schwar in an affidavit that this happened, turns out just a couple of days ago, mr. Hopkins went back to authorities and said, yeah, none of this happened. I lie. I made it all up. Oh, none of it was true. I never saw that happening because it never happened.

But, uh, mr. Hopkins did manage to get $130,000, actually more than $130,000 raised for him by Republican donors through a go fund. Me that James O’Keefe’s project Veritas set up for him, they fricking bribed him is a better way to describe that the Republicans bribed this guy to come forward and lie to investigators claiming widespread voter fraud with the mail-in ballots. Then he was forced to go back to these investigators because he realized he’s probably looking at prison time and say, Hey, I need to recap my statement. I lied about this, but then here’s the crazy part. Then mr. Hopkins comes out publicly and says, I never recanted my statement. So the feds came out and released the audio and said, here is the audio you lying sack of crap. Have you actually recanted your statement? So mr. Hopkins is all over the place.

He is trying to lie to the public because he’s already become a Republican hero. They raised $130,000 for him. And he wants them to think that, Oh, no, no, no, no. It’s not true. I didn’t recant the frogs totally there feds. It didn’t happen. Make sure you don’t know. Oh no, no I’m being silenced. Give me more money feds, please. Seriously, don’t go in there. There’s nothing happening. The guy is trying to have it both ways. The guy needs to be in jail. If you submit a sworn affidavit, you’re essentially essentially lying under oath. And that is what he’s done. He needs to be arraigned and he needs to be detained. That’s what needs to happen at this point? The go-fund me has been shut down. So it’s unlikely that mr. Hopkins is going to get that money. Uh, as I mentioned, James O’Keeffe project Veritas was involved with this from the beginning.

That’s probably the biggest indicator that this whole thing was a fraud to begin with. But folks, these are the kinds of things we have to worry about. And then after that, by the way, uh, Murtala with the Trump campaign, came out again and said, yeah, you know, that was just a small piece of all the fraud that we have put together that we’re totally gonna, uh, bust and uncover. And we haven’t provided any of it to the courts when they’ve asked for it. But, but it’s totally, it totally exists. Maybe it got lost in the mail with, with Tucker Carlson’s Hunter Biden documents. Maybe. I don’t know. I don’t know who would have, who we’ll see. Right. They’re all fraudsters. They’re all Grifters. And in the last week, the mr. Hopkins here, we have seen another right wing grifter be born. Is there any job in the United States?

That’s easier than being a right-wing grifter? Honestly, I don’t think so. It’s a very lucrative thing. I mean, this guy made $130,000. It was taken away from him, but he made $130,000 in a matter of ours. That’s a sweet gig. If I didn’t have as much of a conscious as I do, I would absolutely jump in on that. And I think that’s why we’ve seen a lot of these, like former liberals go into that arena. It’s not because they believe that crap it’s because they want their hands on that sweet, sweet money. Republicans are easy to separate from their money. And there’s a lot of wealthy Republican donors who will hate to who hands you big, big checks just as Charlie Kirk, or you can ask the, uh, the converts, you know, you’re Tim pools. You’re Dave Rubin’s. Yeah. We know why you’ve suddenly gone a little bit to the right or all the way to the right it’s because of that money. It’s because it’s easier talking to an audience of idiots than it is to have to develop well-formed thoughts and ideas based on research and reality. It’s easier to just go out there and make stuff up and get money hand over fist from a bunch of right wing idiots. Mr. Hopkins found that out this past weekend, but at this point that money may not help him if he ends up in prison.