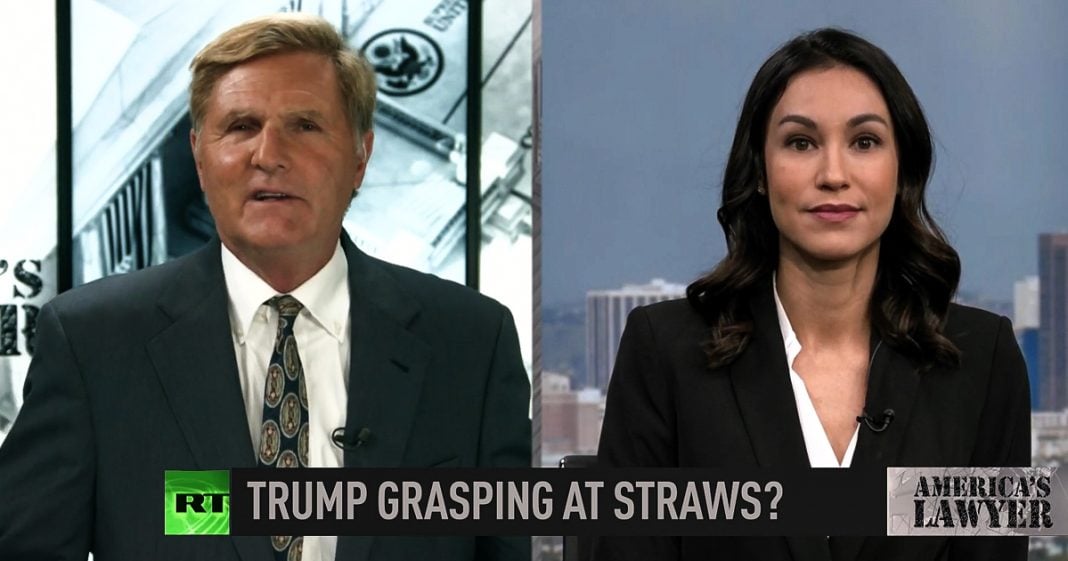 Via America’s Lawyer: RT Correspondent Brigida Santos joins Mike Papantonio to describe the litany of lawsuits Trump is filing, alleging election fraud against various battleground states. Are these last-ditch efforts of a sore loser, or does the President have ground to stand on?

Mike Papantonio:             Joe Biden’s win last week, president Trump and the RNC have waged a legal battle in five battleground States over allegations of election irregularities and right out voter fraud. Brigida Santos is here with me to talk about it. Brigida, no surprise here, but so far, have any of the, have any of these complaints really held up in court? I mean, is there any optics that tell us, yeah, we, we had this vast conspiracy to defraud president Trump?

Brigida Santos:                   Well, so far, no, they have not. President Trump, as you know, has publicly questioned the integrity of the election in a series of federal and state lawsuits. But so far his allegations of widespread voter fraud and election irregularities are unfounded. Now judges have said that Republicans have not provided real evidence to back up their claims beyond hearsay and rumors, but for now, judges are doing their jobs. They’re allowing proceedings to move forward. The president and GOP have a right to sue, but it does not mean they’re going to win. And the courts are a vital part of democracy and tool of checks and balances. So it’s better to see Trump’s claims fought legally in the courts than illegally on the streets with militias, for example.

Mike Papantonio:             Yeah, I agree. This is something that shows democracy is working. He has the right to do it, whether it gets anywhere, I, I have huge doubts. Quickly walk me through some of these lawsuits, if you would.

Brigida Santos:                   Yeah, there are many. So I’m just going to cover a couple. Now in Pennsylvania, a judge has denied a request by the GOP to stop Philadelphia officials from counting absentee ballots. The party had claimed that Republican observers were not allowed in the rooms where votes were being counted. But after one of Trump’s own lawyers admitted that Republican observers were present in those rooms, that case fell apart. Now, Supreme Court justice, Samuel Alito, has ordered election officials to separate ballots that arrived after the election, but still by the deadline. However, he did not stop officials from counting the ballots as many Republicans had hoped. In Michigan, another series of unfounded claims by the Republican national committee have also unraveled. Among those claims were allegations that 2000 Republican ballots were given to Democrats in Rochester Hills due to a clerical error. Now in response, the Republican city clerk of Rochester Hills, who has served in that position for over seven years, had this to say, take a listen.

Tina Barton:                              The accusation that 2000 ballots were found is categorically false. As a Republican, I am disturbed that this is intentionally being mis-characterized to undermine the election process. This was an isolated mistake that was quickly rectified once realized. Every voter should have complete confidence in our voting system. Every vote that was cast was counted accurately, and there is a paper ballot backup. I stand by our reported results.

Brigida Santos:                   And in Georgia, Trump’s lawsuits accusing poll workers of mixing late ballots with those that were submitted on time has also been dismissed due to a lack of evidence. And this list goes on, Mike.

Mike Papantonio:             What can you tell me about the firms who are filing lawsuits on behalf of the president? I mean, he had them all lined up. They’re, you know, they’re the same folks that were kind of in the Bush, when Bush challenged. This is different from the, this is very different from the Bush Kerry election. What, what is your take?

Brigida Santos:                   It’s very different, but the law firms that have filed election related lawsuits on behalf of president Trump and the Republican party are Jones Day and Porter Wright. Jones Day is the most prominent and Trump’s former white house counsel, Don McGahn, is a partner there. Some senior lawyers at Jones Day have told the New York Times that they’re worried the firm is advancing evidence free arguments and helping president Trump and his allies undermine the integrity of US elections. Lawyers at Porter Wright have reportedly also expressed similar concerns. One of that firm’s lawyers has even quit in response to Porter Wright representing the president in his election lawsuit in Pennsylvania. But these firms make a lot of money working with the president. So they’re likely to continue despite growing opposition within. This year, FEC filings show that Jones Day has earned $4 million in fees from the RNC, president Trump and groups that support him, while Porter Wright has already earned $700,000 in fees this year.

Mike Papantonio:             Brigida, after working against folks like this for 37 years, I can tell you, there is no money that is too dirty or too nasty for a corporate defense firm to say, yeah, we’ll take your money. We’ll do what you order us to take. There is no limitation on what a corporate defense firm like the ones you’re talking about will do. You know, some money is just too darn expensive. They don’t believe that. Thank you for joining me. Okay.