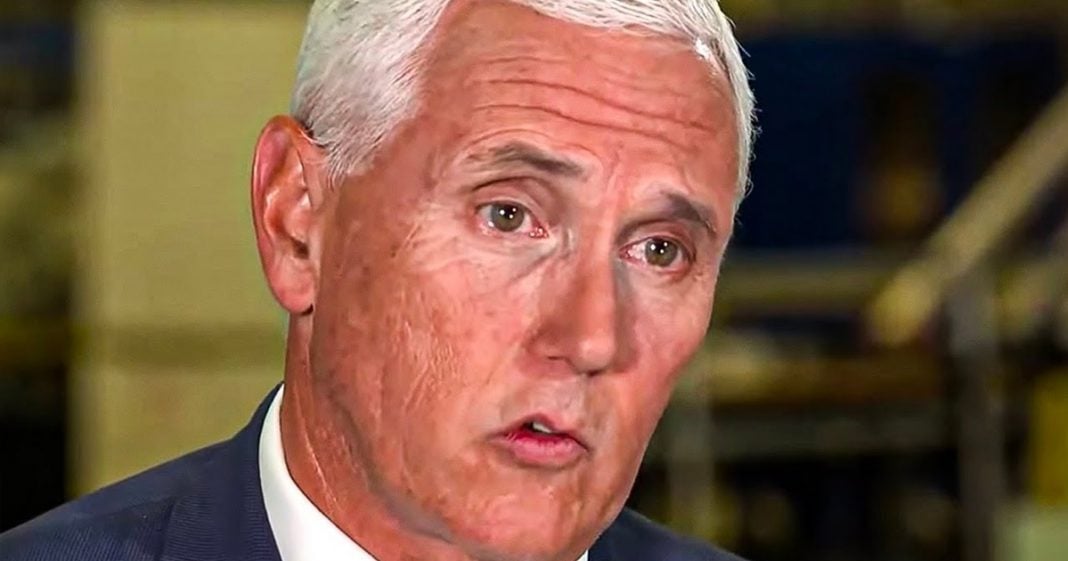 On Monday, Pfizer announced that their vaccine trials were going incredibly well, and that 90% of the subjects so far had a reported immunity to COVID-19. And it didn’t take long for outgoing VP Mike Pence to immediately take credit for this development, and it took Pfizer even less time to say that he and the government had nothing to do with it. Pfizer actually rejected federal funds for the vaccine, meaning the Trump administration had no involvement in their success so far. Ring of Fire’s Farron Cousins discusses this.

On Monday, we got some promising news from a drug giant Pfizer when they announced that their COVID 19 vaccine trials were going very well. And that, uh, people in the trial had a 90% success rate in being immune from the virus. Uh, so far as this trial continues, this is significant. A lot of the other drug companies that have had vaccines developed and they’re in the trial stage, a lot of those trials have actually been halted because of dangerous side effects that patients were experiencing and the vaccines they were coming up with were ineffective. So the newsroom Pfizer’s phenomenal, uh, sent the stock market up four points. It was a good news is good thing. Pfizer also announced by the way that the CEO says, they’re going to distribute this for free. Hey, that would be awesome. I don’t believe him for a second, but it would be awesome.

But of course, shortly after this news was announced, uh, the Trump administration immediately had to take credit for it, right? Vice president, Mike Pence tweeted out the following. He said huge news, thanks to the public private partnership forged by president Trump. Pfizer announced it’s coronavirus. Vaccine trial is effective preventing infection in 90% of its volunteers, Nikki Haley then tweeted out the news about Pfizer vaccine being 90% effective as great news for the American people. Many thanks to Donald Trump and operation warp speed. This will be one of the most important action items done by the administration in response to this pandemic. And then Pfizer immediately had to come out and say, yeah, we weren’t part of that. Sorry, we, we know you pushing this. We know you’ve, you’ve pumped billions of dollars in the drug companies, but, uh, yeah, we, weren’t one of those. So not quite sure why you’re taking credit for, for our accomplishment because we did this, not you.

And then Pfizer said, okay, well actually we are a part of warp speed just in the delivery process of it. But in terms of accepting any federal funds from the Trump administration to develop our vaccine, we didn’t do it. You get no credit for this. Thanks for trying though. But don’t worry. We will be using the government apparatus for distribution of the vaccine. Once we finish the clinical trials, Joe Biden came out and he said, this is great news. Keep in mind folks. Let’s not get, you know, let’s not jump the gun here. It’s going to be many months before this thing is available. If not longer. And Biden is correct to do that. We don’t know. So how long it’s going to take the earliest vaccine has been developed for, for an ailment is four years. And that was warp speed. Usually it’s at least 10, at least 10.

So here we are, maybe a year, the first COVID-19 case and we got a vaccine would not let’s wait and see, as I mentioned, most, most of the other vaccine trials have been halted because of dangerous, severe side effects. I know it sucks. I know it sucks being stuck at home. I know it sucks with the economy tanking. I know it sucks even more for people who have lost their jobs folks, but we can not jump the gun because if we jump the gun, the surge we’re seeing right now will be dwarfed by the next surge. Not to mention the additional injuries that we could see from an improperly tested vaccine. So let’s cool. Our jets let’s be optimistic. Absolutely. And let’s also give credit where credit is due and none of it is due to the Trump administration. Their response to this pandemic has been a Bismal. If Pfizer does the right thing and makes this vaccine available to every one of the everyone in the United States free of charge. And then doesn’t, this is the second part of this. Doesn’t screw over the rest of the world by charging them the markups that they usually charge to us. We’re good. If any of those things don’t happen, then this is not something worth celebrating.