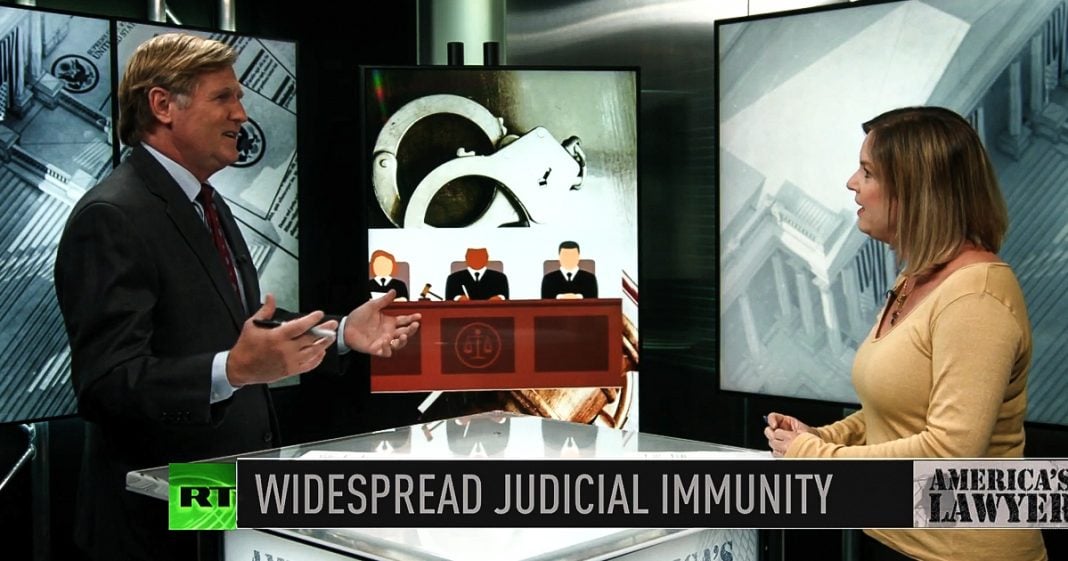 Via America’s Lawyer: With Trump and Biden nearly neck-and-neck at the end of the night, viewers couldn’t believe how political pundits were once again bamboozled, just like in 2016. Mike Papantonio & Farron Cousins discuss more. Plus, a new investigation reveals that over the past decade, thousands of people have been victimized by state and local courtroom misconduct. Legal journalist Mollye Barrows joins America’s Lawyer host Mike Papantonio to discuss this.

Farron Cousins:                  Yeah. And I think overall, the Democrats, you know, even if Biden pulled out the white house, it wouldn’t have been a victory. There wasn’t a whole heck of a lot to celebrate on the democratic side, unless you’re just strictly tribal and it’s us versus them. Then sure. If it’s team sports, you can celebrate. On the issues though, when you look at some ballot initiatives, I know California had some progressive ones that lost, pro corporate ones that passed, the rest of the country, though, they did really great. You know, decriminalization of drugs, recreational use of marijuana, 15 dollar minimum wages.

Farron Cousins:                  Right. Florida goes 500,000 more votes for Trump almost and passes a minimum wage increase, that tells you something about Florida voters. They’re okay with progressive policies, but not these democratic politicians.

Farron Cousins:                  Absolutely. The numbers were, were phenomenal. Trump app, actually increased his standing in every single demographic. Black voters, white women voters, Latinos, and that is what helped Trump stay competitive in this. That’s what made this such a tight race and that played a huge role here in the South, obviously in Florida, but also in Georgia. Definitely in Texas, they broke for Trump and Biden took them for granted. Biden had said on the record, I don’t need to reach out. We’re not going to worry about that.

Mike Papantonio:             Let’s take, let’s take a little, I’m going to take another minute and talk to you about what the list looks like. The list of what went wrong. No surprise here. There was a backlash in the States, in so many of the States there was total backlash from what you call the Hollywood phenomenon. Okay. The Hollywood phenomenon is I’m a celebrity and I’m going to just bash Trump every day that I’m in front of a camera. And for some reason, that’s going to have a positive effect at the polls. It had just the opposite effect. People are, are tired of this East coast, West coast, elite-ism coming out of Hollywood where the, where the Hollywood regards everybody as deplorable if they don’t live in the Hollywood gated community. Okay. So, so that was out there. And it’s almost like you, you idiots, you two tooth idiots who vote for Trump are so stupid that you don’t understand us, the wisdom of the elitist Hollywood. It killed them. It killed them in the state races. It’s very clear. Those numbers are coming out aren’t’ they?

Farron Cousins:                  The celebrities he had on his side really did make a difference and that’s what was interesting. But again, with the Hollywood elite too, just pushing the, just vote, vote and everything will be fine. Vote and all of your problems will be fixed.

Farron Cousins:                  As if the root of all the problems in America stem from Donald Trump and not this, you know, society, this economic system designed to keep down the bottom 90%. No, he is not the cause to our problems and just simply voting for blue is not going to fix anything.

Mike Papantonio:             Joy Behar, Rob Reiner, Chelsea Handler, Lady Gaga, Whoopi Goldberg, you know, come on. They, they cost so much and their belief that their opinion and their status as a Hollywood celebrity was so important that they could just at every turn attack Trump and there was a backlash. And I don’t know, I don’t think it’s going to affect the presidency, but I think it affected the state. I think it affected the, the, the, excuse me, the state certainly state elections. It affected the Senate and it affected the House. So somebody needs to get them under control because it’s going to get worse before it gets better. You can’t call middle America deplorables because of their religion, because of their family beliefs, because they’re, they’re, they’re blue collar workers. You can’t call them deplorables because you’re in your gated damn Hollywood elitist setting and you believe you’re smarter than the rest of the world.

Farron Cousins:                  Well, you know what’s interesting about that too, is that the folks on the, the real left, you know, the, the progressive left, they view those celebrities in the same way.

Farron Cousins:                  You know, they, they think this is ridiculous. You can’t tell people in the middle of an economic downturn from your, you know, porcelain swimming pool, oh, just vote for Biden. Everything will be okay.

Mike Papantonio:             A new investigation reveals that more than decades past and thousands of people have been victimized by state and local courtroom misconduct. We’ve talked plenty about crooked cops. So what’s the deal with what’s happening with these state court judges? Mollye, this, this story is so, so bothersome to me because it, it, it looks like we’ve put them in a position. Some of these judges that we don’t, we, we don’t do what we’re supposed to do, and that’s hold them accountable.

Mollye Barrows:                Right. That’s exactly right and it definitely looks like favoritism. It could undermine the average person’s faith in the court system when they see just how unfair and biased really they’ve been treated for their own levels of misconduct.

Mollye Barrows:                So it’s a great investigative piece by the Associated Press. And they had their reporters dig into a lot of cases themselves, as well as address different judicial commissions in States around the country. And what they found is that between 2008 and 2019, there were more than 1500 cases where judges were resigned, retired or basically allowed to, to slide out of something if they were facing a, an improper, an accusation of misconduct or something improper. There were also more than 3000, almost 4000 in that same time period that basically were disciplined, but the details of what they were disciplined for were kept from the public, including their names in some cases, and they have a list of just the most outrageous things that they’ve done. So.

Mollye Barrows:                Yes, Well, you know, just some real short recaps, real quick. In Utah, a judge sent a picture of a defendant’s scrotum to other members of the court. In another case in California, a judge was having sex with an intern as well as a different attorney in his office. And, and, and, you know, these are not criminal if you will, but they’re certainly misconduct. There are other types of criminal behavior. There were several judges from Indiana that got, went to a conference and they got into a brawl at 3:00 AM in front of white castle. And two of them ended up shot. And the.

Mollye Barrows:                Two of the judges ended up shot. Yes. And so, even though they were all disciplined and said, you know, in that particular instance, the judicial commission said, you’re an embarrassment to the state bench of Indiana. And yet they were all still allowed to go back to work. Or in some cases, like I mentioned before, retire, slide out of it without a lot of consequences.

Mike Papantonio:             So what drives it? I mean, you’ve got a, you do have a judicial commission that’s supposed to look at the facts. They’re gonna, supposed to say, you know, we, we don’t have shootouts in front of a white castle. You’re a judge.

Mollye Barrows:                There was even another one that popped into my head while you were talking and I remember which state this was in, but basically these jury, this jury was debating whether or not a woman had been sex trafficked. And, the judge pops into their deliberations and said, you need to find her innocent. God told me she was innocent and yet, and he received a slap on the wrist. So there’s just, you know, example after example. And it varies by state, but each state and the federal court, they also have their own judicial commissions. And that’s how people file complaints. But the very nature of the way that you do that, and they use Alabama’s example can be intimidating and make it so that people are afraid to come forward, whether they’re attorneys or average citizens, that they feel like they’ve seen some kind of misconduct or abuse of power, the system is set up to make it difficult for them to file a complaint.

Mike Papantonio:             Yeah. So an attorney knows something in a typical kind of situation.

Mike Papantonio:             An attorney knows that this judge is incompetent. Shouldn’t be on the, on the bench. Has done something totally outrageous.

Mike Papantonio:             But it’s really up to the lawyer to go to the commission and not just report, but actually work towards trying to get rid of that judge. You see, I think, I think it breaks down, I think it breaks down with the, the lawyer most of the time, it’s going to come through a lawyer, the lawyer not doing enough to follow through because they’re terrified. Gee, if I lose, if I lose this fight with this judge, then this judge is not all going to be going after me, but all his pals are going to be going after me too.

Mollye Barrows:                That’s right. And it can affect their clients and, and, and all of that. And that’s exactly what they’re talking about. This one, there was even a case in Alabama and they use Alabama a lot as an example, there was a judge there that basically sentenced a woman to well over a year in jail for parking tickets. And it was a longer sentence than you would get for negligent homicide. During that time, her children were taken away, put in foster care, they were abused. She had to jump through hoops to even attempt to get to see them again. And there was another case of a judge in Alabama who was on their judicial commission to investigate complaints of misconduct against judges who had been found guilty numerous times of nepotism, even benefiting his own son. And yet he was allowed to stay on the bench. And the system they talk about with Alabama, if you wanted to file a complaint as an attorney or a citizen, you’d have to get that complaint in writing notarized. So, because it’s notarized, if you lie, they determined they can even pursue you for perjury. And there’s just a whole bunch of rings of fire that people have to jump through to worry about retaliation.

Mike Papantonio:             How many, how many stories, how many, with the story that you’re talking about, did it, did it give us a number of things that they would say this is serious misconduct that just went completely unattended?

Mollye Barrows:                Yes. I mean, there were literally 3,600 cases and they, the wayward judges, they say we’re disciplined, but the details weren’t released. So they were hidden. And they’re actually also, this was another reason why they say it’s intimidating for people to file complaints, these judges, when the complaints are filed against them, they’re given access to all the information, witness statements, subpoenas things that defendants in a criminal court don’t always get access to right away. So the system, they get favoritism and as a result, they’re being lenient and allowed to behave in ways that undermine our system.