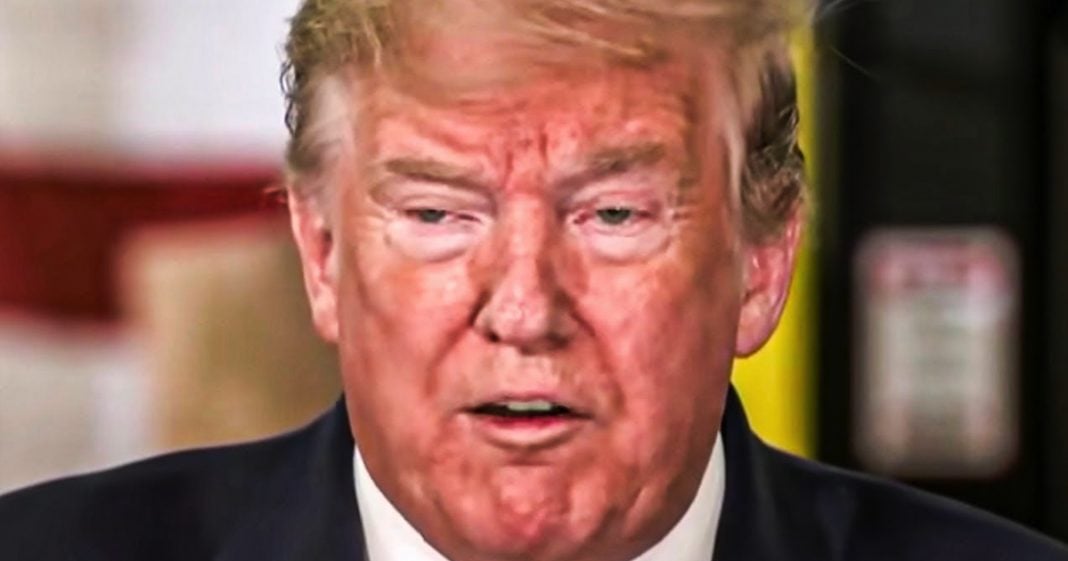 Donald Trump is mounting major legal challenges against the election results, and his campaign is sending out tons of emails asking for donations. But buried in the fine print of those emails is a disclaimer that says that about half of each donation is going towards paying down the debts that Trump has accrued during the campaign and NOT towards fighting against imaginary election theft. They know exactly what they’re doing, and their followers are being conned one last time. Ring of Fire’s Farron Cousins discusses this.

Right now, Donald Trump has launched, I think, more than a dozen legal challenges in different States to the official election results. Uh, that includes the lawsuits that have already been tossed out from last week. Uh, lawsuits trying to stop the count lawsuits, trying to get his observers closer to the votes, even though they’re, they’re not allowed to be any closer than they already are. Uh, those have all been tossed out, but Hey, they still cost money. You know, Rudy Giuliani’s little press conference in front of the landscaping business. He’s working as Trump’s lawyer, that’s going to cost some money. You get to rent the venue. I don’t know how much it costs to rent the parking lot of a landscaping company, but I imagine you still have to pay something. So it all costs money. So where’s this money coming from right now. His campaign essentially broke.

You know, they went through a billion dollars and have literally nothing to show for it. So Donald Trump right now in his campaign are still sending out emails to their supporters, begging them to donate money to Donald Trump’s, uh, legal defense fund, essentially election legal defense fund, and people are doing that. But I hope they’re reading the fine print because not all that money. Only half of it actually is even going towards Donald Trump’s election defense fund. The rest of it is going according to the Trump donation website itself and the fine print, the rest of it’s going to pay off the campaigns, other debts, because you know, they’re broke and they owe a lot of different people, a lot of different groups, a lot of money, and they don’t have it. And if they don’t have it, eventually it’s going to have to come out of Donald Trump’s own pocket.

And he doesn’t want that. So where does he want the money to come from from your pocket Maga hat wearers, the people driving around with the big Donald Trump flags on their cars or on their boats, your, the ones who are going to be paying his campaign debt. If you’re donating to his campaign still that’s what’s happening. He knows he’s not going to win these legal challenges. He knows that it’s over. There’s nothing he can do because he has no evidence that there was any wrongdoing. That’s why the cases have been thrown out. If he had evidence, that would be a different story, but because he doesn’t, there’s nothing he can do. So he knows that, Hey, the bills come and do you know, they’ve already called last call. You don’t have to settle up those tabs in just a minute. And he still owes money. By the way, from rallies, he held before the 2016 election, he owes certain cities, hundreds of thousands of dollars. We just talked about that a couple of weeks ago. They still haven’t paid those debts. And if you think they’ve paid the debts from the flurry of rallies that he just had up to last Tuesday, Oh, you’re kidding yourself. That didn’t happen and it’s not going to happen.

So we has to pay those debts. Can’t pay it from the campaign funds. They’re going to start suing him personally. And of course he is not going to have that immunity, that presidential immunity that he loves to claim. He’s not going to have that, uh, January 20th, 2021 at noon Eastern, that presidential immunity that didn’t exist in the first place. Uh, totally really disappears at that time. Mark that on your calendars folks, January 20th, 2021 at noon, Eastern Trump is no longer president. He has no protections. And if he hasn’t paid these bills, you’d better believe. I believe that the cities States other organizations that haven’t been paid, they’re all going to start filing their lawsuits at that point. And if the Trump campaign can’t pay it, they’re absolutely going to seek you, get that money out of Trump himself. And there is nothing he can do to stop it. But that is why right now he’s trying to get in one last con with his loyal base so that he’s not the one that ends up having to paying the, uh, pay those bills. Instead it’s coming from his die hard supporters who still haven’t caught onto the fact that the whole thing has been one massive con job.