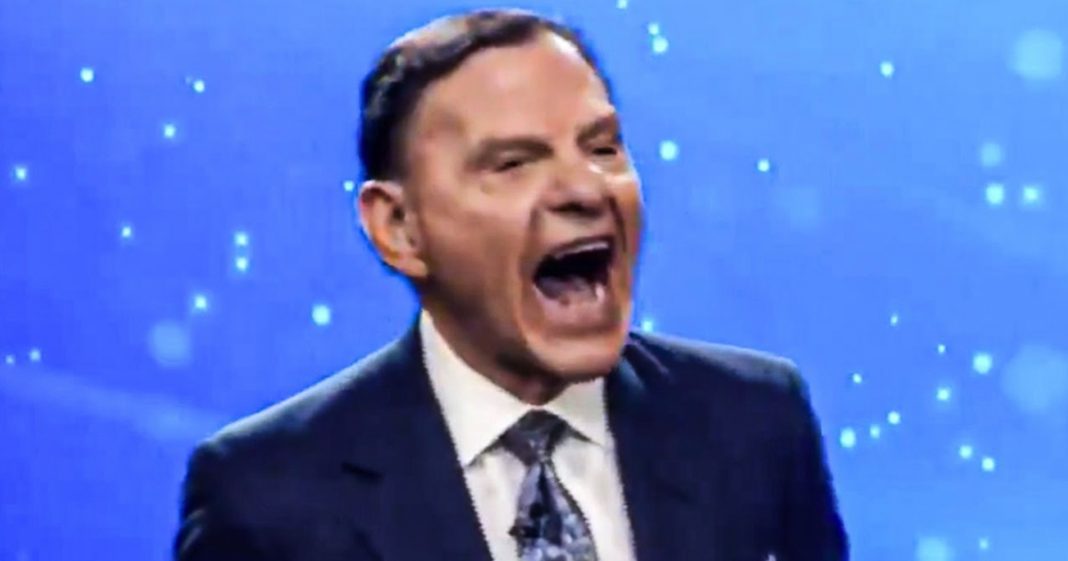 Televangelist Kenneth Copeland tried to calm his flock down after Donald Trump’s crushing defeat this past week, but instead he made the whole country think that his brain had melted after the election. For a solid 40 seconds, Copeland laughed maniacally on stage during a sermon, and then began laughing hysterically for no apparent reason. Ring of Fire’s Farron Cousins discusses this truly unsettling event.

Uh, we have seen a collective meltdown from right-wingers over the past few days after it was announced that Joe Biden yeah. He’s won this thing. He is now officially president elect and right wingers. Aren’t exactly taking that in stride. In fact, some of them are having full-blown meltdowns and we’ve been lucky enough to see some of them happen, uh, on national television or at least getting the video clips of them after they happen. And, uh, Kenneth Copeland, one of the most famous televangelists here in the United States, a huge fraud, you know, multi multimillionaire defense, his money is saying, God wants me to have this. It’s the prosperity gospel, where the closer you are to God, the better you do financially. Um, he had a meltdown yesterday. Like his brain broke like this man is no longer functioning properly as a human being. After he was, uh, basically processing the news, the Joe, Biden’s going to be the next president. He’s in the middle of a sermon. And he says, the media is called the race for Joe Biden. Joe Biden is going to be the next president. And then, well, just take a look.

If you’re still watching this video, congratulations. And thank you. I am shocked. Anybody is able to actually make it through that clip. Uh, but for those of you who did make it all the way through and you didn’t just skip forward to where you see my pretty face again, uh, the part of the end where he actually starts really laughing. That’s the part where his brain broke. That’s where something clicked. Like the dude became the joker right there. Like at that moment it broke, it’s gone. It’s done. Batman needs to come out and take care of him. Uh, you know, like lock them away because this guy is crazy now. Um, that was weird to say the least the whole thing. Like, ah, I don’t even know, like I don’t even need to add any commentary to this. That’s how crazy that entire thing was.

But what’s sad is Copeland’s flock, right? The people out there in the audience. Cause you could see some of the faces, they weren’t exactly on board with this, but others absolutely were. They loved this. They thought this was great. They think God is absolutely a Republican. Uh, I got to tell you, yeah, if you didn’t believe in God, before watching that clip, uh, seeing somebody behave in that manner might actually make you want to start praying because that looked like a demon, uh, took over Copeland’s body and now we’ve got to like deal with it. That’s the beginning of a horror movie. Or as I point out a Batman movie, either way, Copeland’s the bad guy at either one. Cause he’s also the bad guy in real life. Even long before that Memorial laughter but conservative brains are braking. They can’t process this. They couldn’t think for a possible second that they were wrong and that they’re real Messiah. Donald Trump could ever lose elections. Well, it happened his first election. That was a fluke. That was a flute that many people did not see coming. And it was an error that was corrected, but unfortunate for the brainwashed mini. And that includes Kenneth Koch blend. They will never be able to accept that reality.