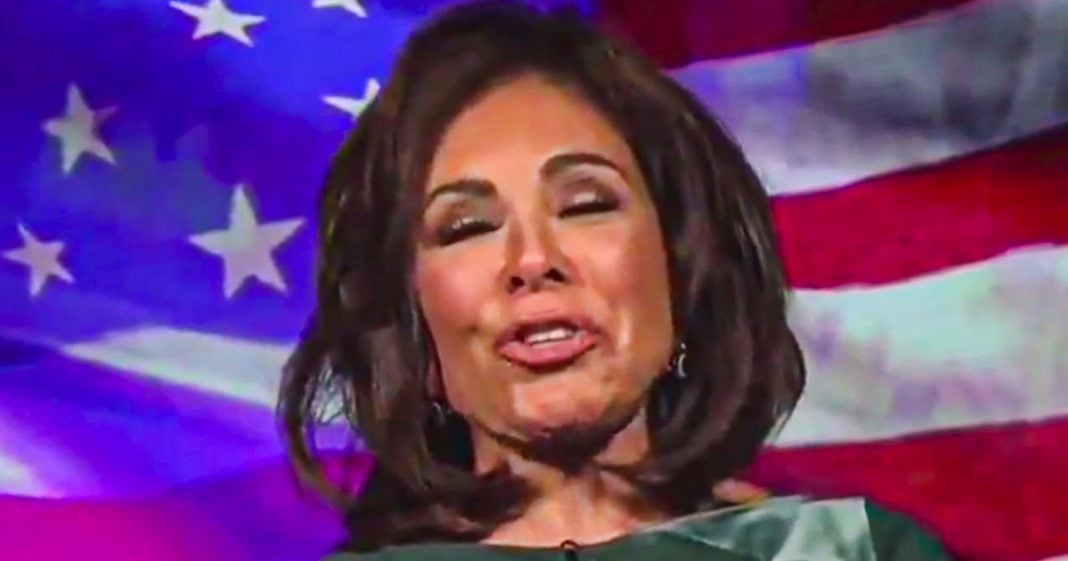 Fox News hosts telling lies is not something that usually makes headlines. But Fox suspending a host just for lying certainly is, and that’s what the network has reportedly done with Jeanine Pirro. To make matters worse for Judge Jeanine, it isn’t clear at the moment if she was just temporarily suspended, or if she will need to find a new job. Ring of Fire’s Farron Cousins explains what’s happening with Fox’s lineup.

Something incredibly interesting happened over the weekend and no, I’m not talking about Joe Biden officially becoming president elect of the United States. It was something that happened over at Fox news. Something that in my wildest dreams, I never thought would actually happen at Fox Snooze. Judge Jeanine Pirro Is all set to go out this weekend on her program. And according to reports expose the massive amounts of voter fraud that took place in the presidential election. And the higher ups had Fox news Apparently said, According to reports, according to Newsmax said, uh, yeah, not gonna happen, Janine, you’re not going to do this. And I guess there, there may have been some arguments. There may have been a little bit of back and forth, but it ended with judge Jeanine. Pirro being indefinitely suspended from Fox news because she wouldn’t let go of this non-existent voter fraud issue because she wanted to use her program to peddle conspiracy theories in lies. The higher ups at Fox news finally said, you know what, judge to hell with it. You’re out of here,

Never in my wildest dreams thought I would see that happened after all lies and misinformation and hell even conspiracy theories. That’s the hallmark of Fox news. That’s what they have been thriving upon for years now. And so suddenly like suddenly they grew a conscious and the, the, the, the executives were like, Whoa, Whoa, hold up. Whoa, Whoa. What’s been happening to the network. I’ve been in a coma for four years. I didn’t know any of this was going on, who is judged her name. You know, this is what your network was all about. And, and by the way, I’m not defending judge Janine here, but I’m wondering like, okay, if suddenly you’re going to start, uh, I guess at least temporarily firing people for spreading lies and misinformation. Does that mean Sean? Hannity’s gone tonight and Tucker Carlson’s gone and Laura Ingram’s caught. Well, Laura Ingram is actually I think, accepted the results of the election.

Um, does that mean Fox and friends is also going to be canceled? Does that mean every other person on that network is going to be gone? Water’s world you’re outta here. The five, all y’all are gone. Kennedy. Uh, now, you know what I think Kennedy actually did except in she called Giuliani out in his conspiracy theory. So maybe she won’t stay or won’t get fired. So you’re going to have a network with what, like three hosts. That’s all you’re going to be left with. If you’re going to start firing people for lying and pushing conspiracy theories, now don’t get me wrong. I want that to happen. And that should happen. Fox news has played fast and loose with the reality for far too long. And you have poisoned the well of Like discourse this Needs to happen.

And I’m glad Fox news suspended, judge Jeanine over this. Because as we all know, there is no evidence to support these claims of massive voter fraud taking place. Nice. And you know how we know because of the court cases that Donald Trump has tried and failed to file, Oh, he’s filed them and show far every single one they’ve lost and they’ve lost every single one because they have no evidence to back it up, witnessing those on the right freaking out, claiming that the election was stolen, that the results are fraudulent pushing these crazy conspiracy theories that are going to become far more dangerous as time I’m drags on judge Jeanine wanted to further that. And she wanted to further it for that reason because they will become more dangerous because it will inspire the right. It will get them all jazzed up and riled up. But the truth there’s, there’s nothing there and you can’t go out there and just start spreading rumors just because those rumors benefit you eventually karma comes back around. And that is what finally happened to judge Jeanine this past weekend.