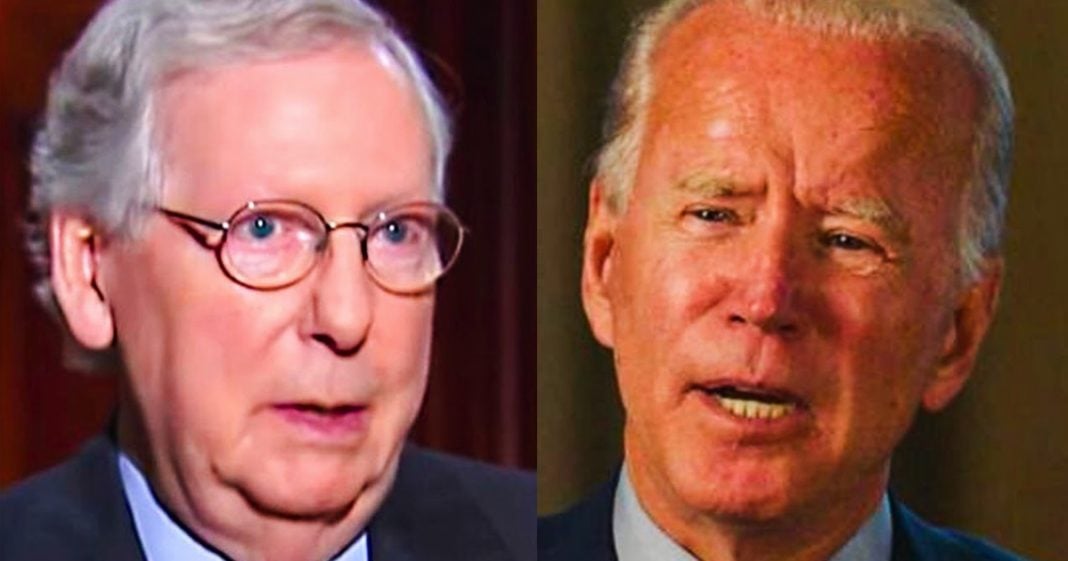 Axios is reporting that staffers for Senate Majority Leader Mitch McConnell have admitted that the likely Republican-controlled Senate is going to make sure that Biden can’t get any Progressive nominees approved for cabinet positions, and that way he’ll be forced to go with centrist candidates. The joke might be on them though, as Biden was seriously unlikely to put any real progressives in his cabinet. Ring of Fire’s Farron Cousins discusses this.

With Joe Biden, clearly on his way to the white house in January and Mitch McConnell, unfortunately likely on his way to being Senate majority leader for a, another term and of the two years, at least most likely, uh, doesn’t look like a whole hell of a lot is going to get done in Washington DC. And it’s not just because, you know, uh, Biden’s not going to play nice with Republicans. He will. He made it clear. He’s going to work with Republicans. They may even be a part of his cabinet. And if Mitch McConnell has his way, they will be. And that may be the only people allowed in a Biden administration. A report from Axios this week said that, uh, staffers for Mitch McConnell have confirmed that Mitch McConnell was already working on ways to sabotage Biden’s presidency. And he’s going to do that, get this by making sure that he doesn’t get any of his more progressive nominees for cabinet positions approved in the Senate, forcing him to go with more centrist options. Was that ever not the plan for Joe Biden?

Now, originally when I saw this, I thought that was my first thought is yeah, like that’s what Biden’s going to do anyway. But then, then sitting here just now I’ve had a revelation in all of the Republican ads that they ran against Joe Biden during this, uh, election, they talked about, you know, the socialism and who’s going to be pulling the strings. And he’s a puppet of the far left and Oh my God, these extreme policies, and he’s going to take your guns and he’s going to force you to have abortions. And he’s going to have all these crazy liberal policies that he’s never supported. And I’ve realized now, like, does Mitch McConnell actually believe that that is who Joe Biden is at first, I thought it was just a smear tactic to scare the moderates out there and the independence. But now I think Republicans actually believe those things about the centrist Democrats like Joe Biden, Joe, Biden’s a centrist. He is. And yet Mitch McConnell’s out here poking out of his little turtle shell with his fricking purple hand. Say it love going to make sure that you can appoint Diddy, regressives.

He was never going to appoint any Progressive’s it’d be kick . Awesome. If he would, but instead, we’re going to end up with, you know, union busting. Anti-abortion John Casick. We’re going to end up with wall street insiders, running the treasury. We’re not going to have Elizabeth Warren. We’re not going to have Bernie Sanders. We won’t even get somebody like Andrew Yang who I think would be pretty good in a cabinet position. Absolutely. He’s got some great ideas. I don’t agree with all of his ideas at all, but he’s got some really, really good ones that can absolutely help change this country. He’s not going to be invited to the table. Nobody’s going to be invited to the table. And the other thing is that if you think Mitch, McConnell’s going to let a single liberal judge that Joe Biden appoints get an, uh, get through to confirmation your kidding yourself.

That’s not going to happen. We could have a Supreme court vacancy on day one of Joe Biden’s administration, or you know, how long that seat would remain open until the next Republican were elected president or until the Democrats took back over the Senate, whichever came first. That’s how long that would happen. Mitch McConnell is making it clear. He’s not going to let anything happen. Nothing will get done. And we should take him at his word because this is exactly what he did when Obama was in office headed the most obstructionist, uh, Senate in history, statistically, the most obstructionist. And that’s what we’re going to be looking at. Again, part of the fault on that lies with the establishment who put up Amy McGrath, a pro-Trump Democrat to run against Mitch McConnell. When he handily defeated her by double digits, that was stupid. And it is what it is. We’ll see what happens. McConnell’s not in great health. He’s 78. He’s got another six year term ahead of him Biden. On the other hand, also, you know, older, so to speak, who knows, maybe we can get some change out of this administration. Obviously it’s going to be better than Trump. Sure. A hundred percent. Like I voted for Biden. I’m not going to regret that. Revoke a vote at all, unless something catastrophic happens obviously, but it’s going to be better, but don’t expect any miracles will Mitch McConnell is calling the shots.