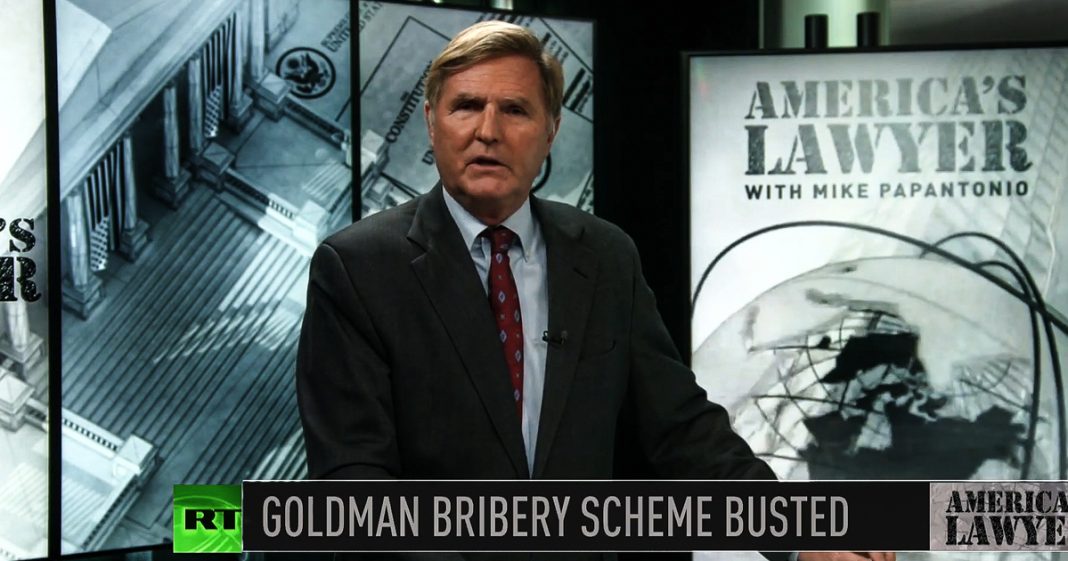 Via America’s Lawyer: The US Department of Justice announced recently that Goldman Sachs had agreed to a $2.9 billion dollar settlement for the banks involvement in a criminal scheme that was run by the government officials in Malaysia. Mike Papantonio explains more.

And finally tonight, some good news, the US department of justice announced recently that Goldman Sachs had agreed to a $2.9 billion settlement for the bank’s involvement in a criminal, a criminal scheme that was run by the government officials in Malaysia. According to the charges, the bank admitted as part of the settlement, that the bank had helped Malaysian politicians and officials embezzle money from the government fund that was created to spur economic growth and investment. But instead it was treated like a piggy bank by officials and by at least two Goldman’s, Goldman Sachs bankers.

Goldman Sachs is going to end up paying close to $5 billion for their involvement in the scheme. But even that is nothing. These folks need to be prosecuted. They need to be perp walked and that’s where the justice department has always dropped the ball. The DOJ always announces we’ve got this big fine, but we’re not going to prosecute anybody. Until you start prosecuting these thugs, just like you would anybody else in a criminal case, this kind of behavior is going to happen again and again. The only way to end the criminal activities that we’re talking about by bankers and by wall street is to line them up the same way that you would anybody else, any other criminal in a perp walk, that’ll end it.

That’s all for tonight. Find us on Twitter and Facebook @facebook.com/rtamericaslawyer. You can watch all RT America programs on Direct TV channel 321 and also stream them live on YouTube and be sure to check out RT’s new portable app, where you can watch all your favorite shows. I’m Mike Papantonio, and this is America’s Lawyer, where every week we tell you the stories that corporate media is ordered not to tell because their advertisers won’t let them and because of their political contacts telling them, please don’t tell that story. We’ve seen that a lot this year, haven’t we? Have a great night.