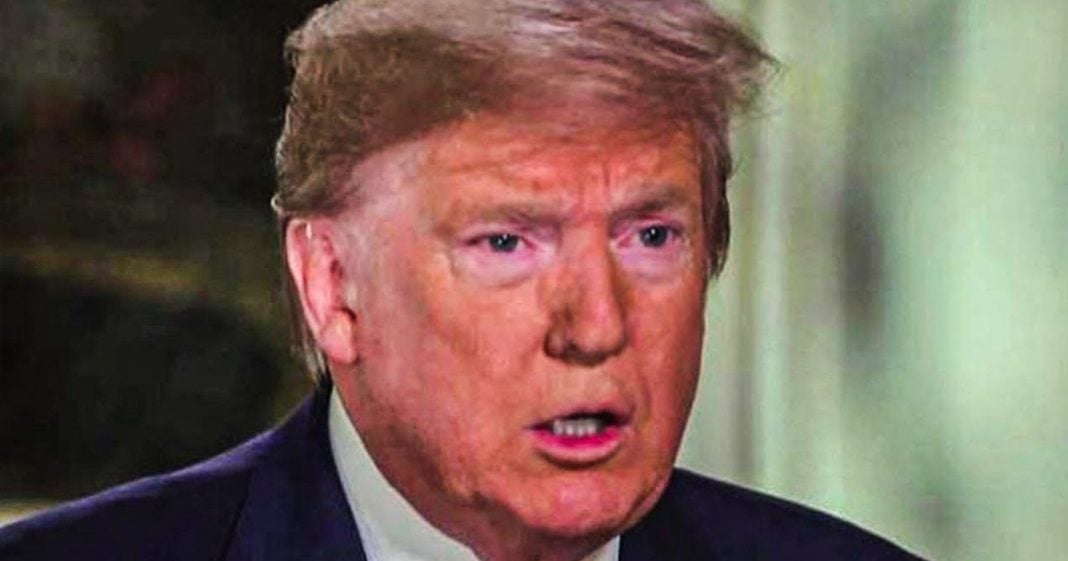 Donald Trump owes hundreds of millions of dollars to Deutsche Bank, and that debt is coming due VERY soon. And, based on the repayment agreement, if Donald isn’t able to pay, the bank could very easily and quickly begin seizing his assets. This is far more likely than most people realize, as Donald Trump isn’t sitting on a mountain of cash at the moment. Ring of Fire’s Farron Cousins discusses this.

Representatives from Deutsche bank. According to a report this week are looking for a way to sever their ties to Donald Trump, Donald Trump, who owes Deutsche bank by the way, $340 million. And that debt is coming soon rather quickly. And according to the report, if he is unable to pay that debt, when it comes due, after he leaves office, they could easily start seizing his assets. And I’m going to get more to that in just a moment. Explain why that’s a very likely scenario, but first, why does Deutsche bank wanna not give Donald Trump a continuance? Why do they want to, you know, get their money back and then leave him out cold? Well, according to the officials from the bank, they’re tired of the scrutiny they’re getting. They’re tired of the negative publicity. And more importantly, they’re, they’re tired of Congress knocking on their doors and investigating. And they’d, they’d rather that stuff kind of go away.

And maybe if they stopped doing business with Donald Trump, maybe Congress, isn’t going to come sniffing around as much and believe it or not folks, those congressional investigations are in fact, something that they mentioned as to why they want to cut ties with them because they don’t want to deal with Congress. Now, to me, when you have a body like a bank like Deutsche bank, that by the way, has, you know, been found guilty of criminal conduct in the past. They’ve paid massive fines for it. But when they’re like, Hey Congress, we really don’t want you to sniffing around our files anymore. So if we get rid of him, will you stop that to me is a good indication that you know what? You probably need to dig into other things too, because it’s probably not just Donald Trump, maybe, although, maybe based on what we’ve seen from quite literally every other major bank in the United States, maybe they’re hiding something.

Maybe that’s why they don’t want you sniffing around their files and, you know, flipping through the records and all of that, because you’re going to find more bad things. So Congress, if you’re listening, please make sure that you do not relent with Deutsche bank. It doesn’t matter if they cut ties with Trump. This has nothing to do with Trump. If there’s criminal activity taking place at this increasingly nervous bank, I’d say that warrants a little bit of an investigation. Wouldn’t you now as to the seizing of Trump’s assets. Cause I’m sure that’s what everybody’s waiting with. Bated breath to hear about, right? You want to know how this, how this affects the orange man? Well, here it is. What’s Donald Trump’s number one, uh, industry that he’s in real estate. When you’re in real estate, you typically do not have a lot of cash on hand as your cash is tied up in these real estate investments. Now you get lots of cash on hand, obviously when they sell, Uh, if Nothing’s selling or if you’re in the hotel industry and say we’re in the middle of a pandemic, no buddy’s traveling.

You don’t have that cash. So then the bank says, Oh, we’re have to take your stuff. And again, when your stuff is real estate, that’s the stuff they take. So Deutsche bank could very well instead of going in and taking the golden toilet, they could just start taking Trump properties. And if you think that that’s out of the realm of possibility, uh, don’t forget Panama. When they found out he was cheating them and screwing them over and they kicked his out and unceremoniously went out there with a crowbar and pried the Trump name off the outside of the building it’s possible. And it’s been done before. What a fitting end to the Trump story too, right? I mean, obviously they’re not going to seize all the properties he has, but they have rights to take a couple, maybe to pay off that massive debt. And if they genuinely want Congress to snap, stop sniffing around on them and Trump doesn’t have the money to pay off that loan immediately. Rest assured. That is exactly what they’re already thinking of doing. And we know that because that is what they’ve already told reporters.