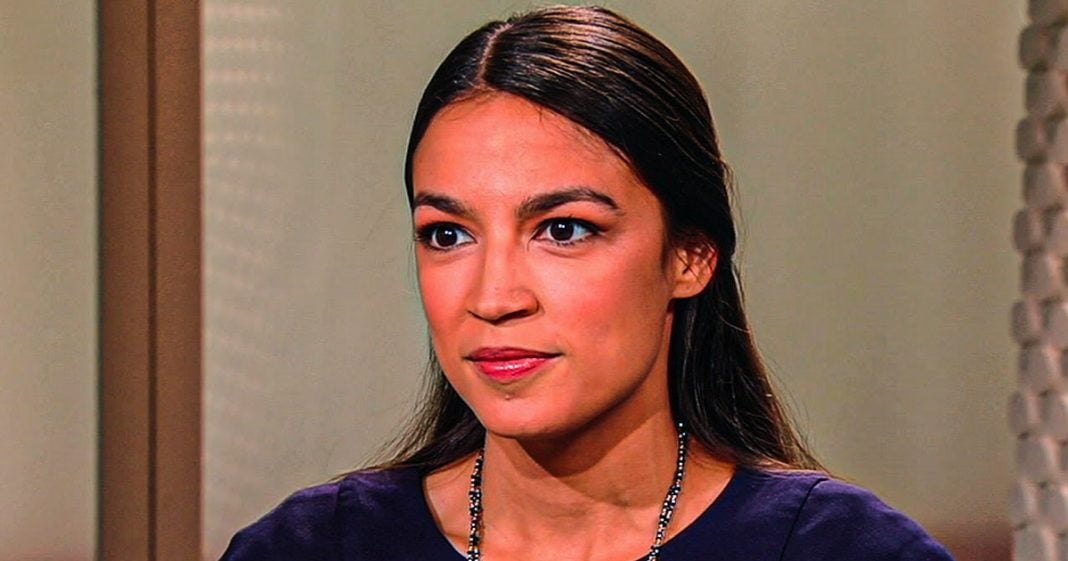 During an interview with Bernie Sanders on Monday, Representative Alexandria Ocasio-Cortez said that progressives had already won the generational moment, and that Tuesday’s election didn’t change that at all (and she said that BEFORE the election.) And she’s right. Progressives have won the battle of ideas, and they are slowly winning over the public, too. Ring of Fire’s Farron Cousins discusses this.

On Monday of this week, day before the election, you know, before the, you know, uh, all of that, uh, representative Alexandria Ocasio Cortez did a video interview with Bernie Sanders. And somehow I missed that. Uh, I think a lot of people actually did, but during that interview going back and watching it, she said something that I could not agree more with. What she said was that Progressive’s have won the generational moment. You and this was Monday, she said, it doesn’t matter. What’s going to happen Tuesday. You know, that’s not that it’s irrelevant, but that progressives have already won. And there’s several different meanings of that. The first one is the battle of ideas. Progressive’s have won that handily. When you look at the Republican party, and I know I’ve said this at length, and I will continue to say that all the time, by the way, um, Republicans haven’t had a new idea since 1980s, when Reagan came in and they said, Hey, we’ve invented something called trickle-down economics.

Y’all should give it a try. Well, we’re going to give it a try. We’re going to do it. And it tanked the economy. And every time it’s been tried, it tanked the economy. Um, but that was the last new idea that they had. And it was a bad idea, but it was new. So since then they’ve had nothing, the democratic party on the other hand has had a couple here and there, but it’s the progressive wing of the party that really came out in full force. And this is what AOC was talking about. They’re the ones who came out and said healthcare for everybody debt-free college, green, new deal. What else? We got $15 minimum wage. They’re the ones who came out with ideas, ideas that most people in this country support. And if it hadn’t been for the massive disinformation campaign against the green new deal about it, banning cows, uh, that thing would have overwhelming universal support because action on climate change and efforts to reduce emissions and switch to renewable energy that has overwhelming bipartisan support.

So the disinformation, which of course flows from the fossil fuel industry, uh, that’s what kind of tainted the green new deal a bit that can be corrected. It’ll take some time, but it can be, but Medicare for all. I mean, who would have thought we would be at a point in this country where most people in this country say we want government run healthcare. That is remarkable. You have been doing this for 16 and a half years at this point. I didn’t think we’d hit that point. I honest to God, never thought we would see that support for legalization of marijuana. That’s going through the roof that is now I I’ve lost. I had checked that a majority of people support that the $15 minimum wage people support it. And they’re not buying into the propaganda saying, Oh, that’s going to tank the economy and kill jobs. Nope. Everywhere. It’s been tried. Major success stories.

AOC is right. Progressives have won the generational moment and not just in the battle of ideas. They’re literally winning the moment we are watching Progressive’s every two years challenge incumbent. Let’s knock them out. When public office bring a more progressive viewpoint into the house, the squad is no longer four people. Squad is getting bigger. The squad will be even bigger two years from now. And sure, there’s a lot of really great progressive candidates who unfortunately did not when their primaries, um, cause a lot of great progressive show, unfortunately did not win their their races. Uh, even if they did, you know, make it to the, the final ballot, that’ll change. Look, there’s going to be, it’s never going to be a hundred percent. Everybody that Progressive’s put up, you know, every leftist, every democratic socialists, they’re not going to win every time. What do you ever does?

So we will take these, these victories and move forward with them because sometimes that’s how change has to happen there. Where incrementalism simply will not work. We need big, bold, structural change. The economy is one of them. Healthcare is one of them, the environment. There’s another one. But in order to get those things, in order to have the numbers, to be able to make those switches, we got to settle for every two years for now, we get more Progressive’s in there. We do what we can to patchwork those things until we can flip it to what it needs to be. If AOC is correct, and we have one the generational moment, then the time to be able to bring those big structural changes. It’s not that far off. We can see it on the horizon. It does depend on each and every one of us, it’s not just up to the members of the squad.

We can’t just elect them and say, Oh, okay, cool, great. Y’all got, got it. Now we have to push. We, you have to be better. We have to want better. And we have to get the roadblocks out of the way for them. And if that means voting against somebody that happens to be in your same party, then sometimes you got to do that. If that means, you know, nominating somebody that, Oh, maybe they’re a little too extreme. I’m not so sure about it. You know what we have to do. It changes and comfortable, but change is necessary and inevitable. So get used to it.