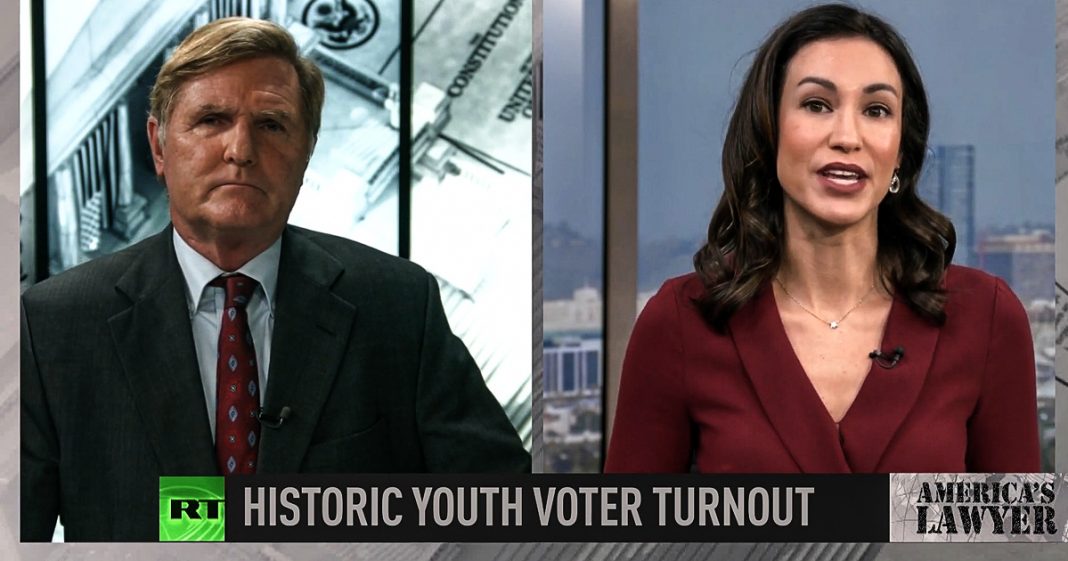 Via America’s Lawyer: RT Correspondent Brigida Santos joins Mike Papantonio to talk about voter turnout hitting record-highs across the country, especially among Millennials and Gen Z. After flooding the streets in recent years with their political activism, young voters are making their voices heard like never before.

Mike Papantonio:             A record number of young voters participated in this year’s election, despite unprecedented challenges. Brigida Santos joins me now to talk about that. Brigida, you know, we saw a lot of surprises, didn’t we? This, this wasn’t a surprise. We, we, you know, there’s always been the discussion, well, young voters just don’t show up. The Democrats finally tried to focus on the idea that maybe we ought to spend more money and effort trying to do that. But there were surprises with, you know, we thought that the demographics on, on women were going to, to, to harm Trump. In fact, he increased by 5% or minorities he increased that substantially. Latinos, it was, there was so many surprises. This was no surprise. But how many young voters cast ballots in the presidential election? And what are the top issues that they seem to be concerned about?

Brigida Santos:                   Well, ballots are obviously still being counted, but the center for information and research on civic learning and engagement at Tufts university has found that voters between the ages of 18 and 29 voted in record numbers. Now over 7 million young voters had already cast ballots prior to November 3rd, and we’re on track to surpass 2008’s record youth voting numbers. Now the most important issues to young voters are climate change and the environment, racism and healthcare. Millennial and generation Z voters make up 37% of the electorate and this year they were inspired to get active and lead protestors to the polls. Political activism among youth has been increasing since the occupy wall street movement. And in recent years, young organizers have demonstrated for black lives, rallied for their lives against gun violence, raised hell over the construction of the Keystone XL pipeline and even led a global climate strike. Their futures are uncertain and they’re tired of sitting on the sidelines.

Mike Papantonio:             Yeah, there’s going to be a tremendous backlash if all, if they don’t see a response for their, their turnout, I can tell you that that’s, that is where the rubber is gonna meet the road. They turned out in these big numbers, they expected something to happen. Something had better happen. What kind of obstacles do young people face in, in this voting process? It’s a little, is it more difficult for them? Why haven’t they turned out in the past? What’s been the obstacles?

Brigida Santos:                   Sure. Look, there’s a common misconception that young people today are lazy, selfish and not civically minded. But what many people don’t realize is that young voters absolutely face unique obstacles to participating in elections. Some polling places have complex identification requirements for young voters like in Wisconsin, where out of state college students need to show their proof of residency and enrollment and show their college ID cards, which are only considered valid by the state if they display the date that they were issued and other information that’s not always printed on student ID cards. They also have to show proof of college enrollment and without a voter compliant photo ID card out of state students can’t vote. Wisconsin’s college students make up 6.9 percent of the eligible voting population there and Donald Trump won there in 2016 by one percentage point. So this is a significant voting block that’s potentially being left out.

Now, other States have also implemented laws and rules that undermine young voters like removing mobile or early voting sites on campuses. Students can’t always take the day off to go vote. So this absolutely discourages them. And then of course this year, health concerns over the coronavirus pandemic also created additional obstacles for voters regardless of age. And despite these youth voter suppression efforts, young people, aren’t letting it stop them and in some States like California voters just weighed in on whether or not to expand voting rights to 17 year olds. So far, it does not look like proposition 18 is going to pass to allow 17 year olds to vote. But the fact that we’re even talking about it and that it’s even an issue on the ballot, says a lot.

Mike Papantonio:             What kind of candidates might we expect young voters to support down the line? What, what are we looking for in a candidate?

Brigida Santos:                   Definitely candidates that prioritize environmental issues. This is not just a democratic issue. Many young conservatives also care about the environment and conservation efforts. Young people are the ones left dealing with the country’s problems. It’s exciting to see them care about their futures and participate in shaping it. And this shows that they know their voices and votes matter, no matter how much the establishment counts on them not showing up and in the future, those establishment candidates may not be able to hold their votes if they don’t follow through with the things that they want.

Mike Papantonio:             Yeah. There better be a serious follow through on climate change this go round or the, you know, burn them one time, you know, and there’s not going to be another turnout like what we saw here for these voters. Anyway, Brigida, thank you for joining me. Okay.