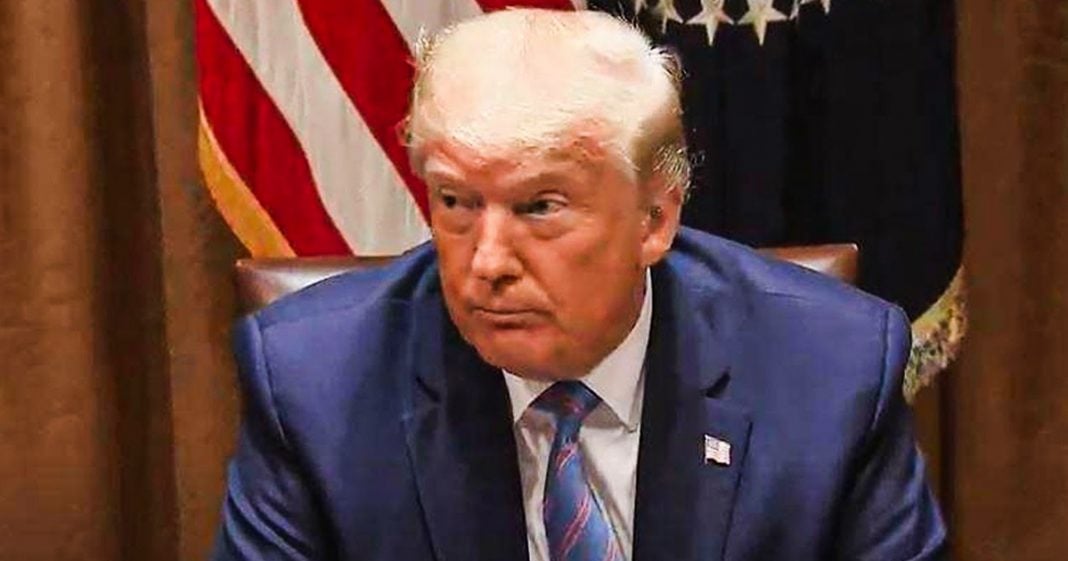 Donald Trump isn’t just losing the election, he’s losing his court battles to steal the election, too. So far two of his lawsuits that claimed massive amounts of voter fraud rendered the results fraudulent. Judges aren’t buying the argument, and that is why Trump is trying so hard to sell it on social media instead. Ring of Fire’s Farron Cousins discusses this.

Well, obviously Donald Trump is not doing so well as votes continue to be counted in, uh, Pennsylvania, Georgia, Arizona, and Nevada. The only state Trump still has a comfortable lead in is North Carolina. And of course at that point, it puts him out of reach of the two 70 needed in the electoral college to actually stay the president for another four years. So he has no other option, but to Sue, right, you got to stop those counts from happening. And then you got to get some of the ballots thrown out because cause then maybe you win. But luckily judges here in the United States understand that you can’t just Sue and say, I want these ballots thrown out. And yesterday remarkable thing happened to of Donald Trump’s lawsuits to either stop the count or have ballots thrown out, were thrown out by the judges themselves in both Michigan and, uh, Georgia, Donald Trump lost two court cases yesterday in Michigan, he was suing to, uh, stop the count in Georgia.

Um, uh, he was suing to have certain ballots thrown out because according to one Republican poll watcher, these votes in Georgia had come in after the deadline. And so therefore they were all illegal. You couldn’t count them. And then when, when that went to the, in front of the judge, the, the poll worker was unable to provide any evidence of that. That, that that’s what happened. The Trump campaign couldn’t provide any evidence. And the judge said, cool, get the hell out of my courtroom. Then not word for word. Obviously I’m being far more brash with it than the judge was. But similar thing happened up in Michigan. They said, hold up, you got to stop the count. We got all these illegal votes and the judge says, cool, where’s your evidence? They say, well, we’d just hold up on the whole evidence thing. Who said we needed that.

Get out dozens, more lawsuits have already been filed, right? They’ve got lawsuits going in Nevada. They got lawsuits going in Arizona. Uh, I think they’ve got more in Georgia, um, lawsuits all over the place. But folks, as I told you before the election even happened weeks before the election even happened. And this is exactly what I predicted would play out and exactly how I predicted it is how it is playing out. You can’t just Sue because you’re not happy with the results. If you’re going to go into court and say, judge, there was fraud. These ballots shouldn’t count. You have to be able to prove it. If you cannot prove it, you will get laughed out of the courtroom. And it doesn’t matter if it’s a conservative appointed judge or not. They don’t owe anything to the Republican party. By the way, they’ve got their lifetime appointments.

I know some of these who ruled on cases, yesterday’s, weren’t all a presidential appointment judges, but as it goes higher up in the court system, because they will be appealed, uh, you will hit Trump appointed judges, or you got go one in three chance of hitting a Trump appointed judge, because he’s packed the court so much. But even then they don’t have to worry about off the Republicans. Cause what are the Republicans going to do? They’re appointed for life, which is why we have seen John Roberts, chief justice of the Supreme court, very conservative guy on certain issues. Be like, yeah, I’m going to go with the liberals over here. Why, what are you going to do? I’m already the highest judge in the country. What are you going to do?

If they don’t have evidence? Even the most concern judges out there are not able to keep these lawsuits alive because they, what that would mean that would be an absolute oversight through of our country itself happening from within. And at that point, nothing would matter anymore. It would be an illegal coup and this country would descend into chaos. And as conservative, as soon as some of these judges are, they don’t want that to happen either. They got theirs, they don’t care if Trump gets his, that’s the way it is. That’s how conservatives operate. And Trump’s going to find out that they’re not as loyal to him as he thought they were.