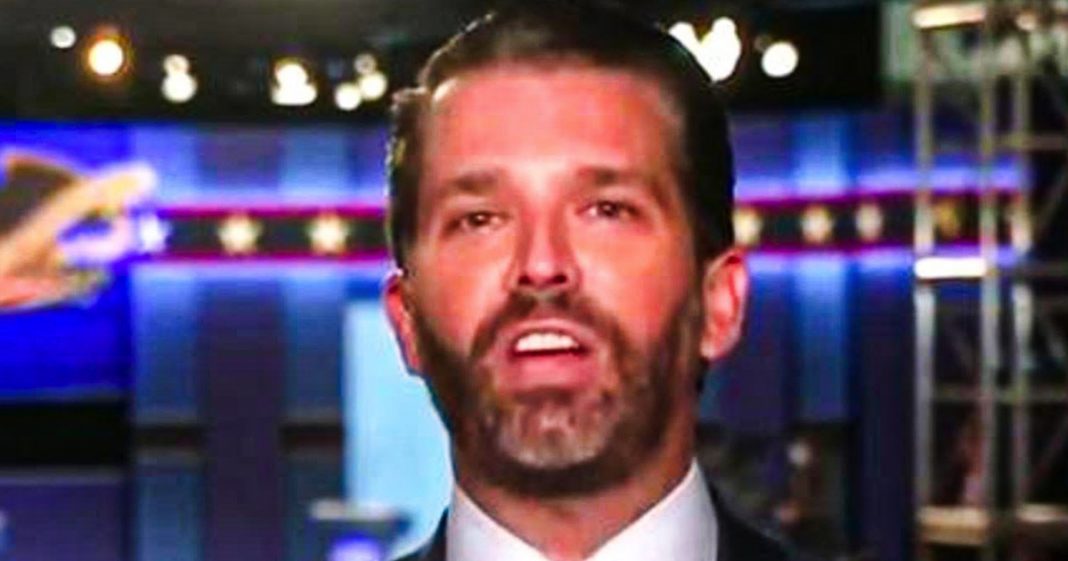 Donald Trump, Jr. is having a meltdown, not unlike all the other males in his family. But Junior’s meltdown has included a call for “total war” against the vote counting, something that his rabid and unstable base would love to see become a reality. The truth is that the Trump family is not only afraid of losing power, they are afraid of the massive investigations they are facing that they can no longer outrun. Ring of Fire’s Farron Cousins discusses this.

Well, Donald Trump is not the only person in his family. Who’s kind of freaking out right now about what’s happening with the election. And the fact that the more the votes are counted, the worst it looks for Donny, uh, his family, mostly Eric and Donnie jr. Are also having their own collective meltdowns in various parts of the, uh, media. Eric is sticking pretty much primarily to Twitter, uh, where he is tweeting out videos, that claim there’s massive amounts of voting fraud yet. Not one of them offers any proof. And then John jr has given a couple of interviews and of course, taken to Twitter where he’s gotten smacked down by the Twitter gods for posting misinformation. Uh, but yesterday during one of his interviews, he said that his dad needs to fight every one of these battles to the death and that he needs to engage in quote, a total war to make sure that he remains president of the United States.

I told him or the item to the death, which I mean not to be technical here, Donnie jr. But, um, if your dad fights a battle to the death, wouldn’t that mean he’s not going to be president anymore. And when that make Mike Pence president? No, you’re, you’re speaking metaphorically, but come on, let’s use it better metaphors here. You, you can’t talk about the president dying Donnie, jr. Even if it’s your dad. Okay. You gotta, you gotta be very careful there’s rules about that. Nevertheless, this is a man junior and his dad. Who’ve never been to war. They don’t know what it is actually like, but they like using those big, tough guy, you know, metaphors like this is, we will fight it to the death man. We’re with you brother gut dish for America. No, y’all don’t know what it’s like. I don’t know what it’s like.

I, I D I didn’t serve in the military, but you guys didn’t either, but I’m also not invoking that kind of imagery to make myself look bigger and better than I actually am. You know, you’re cowards. And that’s why you’re freaking out right now, too, because you’re afraid, not just of daddy, not being president anymore, not just of losing that clout in that access, but you’re afraid of what’s coming down the pipeline once daddy’s out of office. Cause that’s take all of you down or at least cast a really, really dark cloud over your businesses for the remainder of the day days. And we know that. Yeah, because New York attorney general Latisha, James said as much on MSNBC with Ali Velshi, uh, this past weekend, when I said, when he’s out of it office, actually, she said, doesn’t matter if he’s wins or loses the election.

She’s still going to pursue these investigations. But if he’s not the president anymore, there goes his only defense and his only rationale for getting these cases continued and continued and continue to not complying with subpoenas. Once he’s out of office, he doesn’t have that excuse anymore. Don jr. Doesn’t have that excuse anymore. Eric Trump doesn’t have that excuse anymore. And we know that they’ve been waiting to get his testimony it’s done. That’s why the Trump family is freaking out so much right now because they could be going to prison in the very near future or at the very least watch this business that they have created get broken down, broken up confiscated by banks, by prosecutors, by cities and States and other countries. They’ve seen it happen, you know, little bits and pieces here and there and considering the investigations they’re facing and considering the massive amounts of debts that are coming due, that the president doesn’t have the cash to pay. Yeah. If I were them, I’d be pretty scared right now, too.