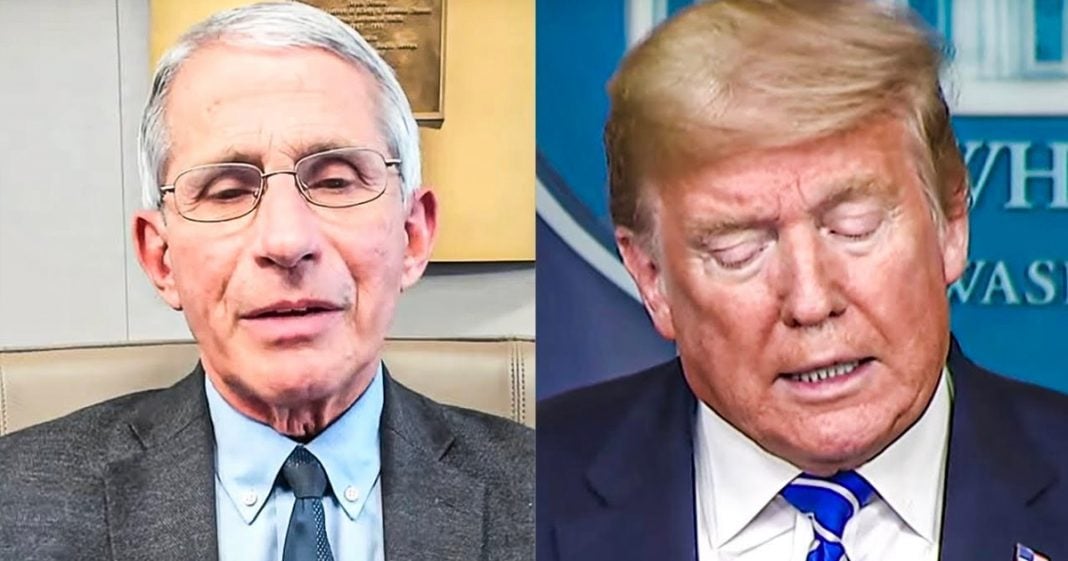 Donald Trump has had it in for Dr. Anthony Fauci for most of the year, but he hasn’t been able to get rid of him because of the backlash that he would face from the public. But Trump admitted during a recent rally that he couldn’t do it BEFORE the election, strongly implying that Fauci was going to be fired AFTER the election is over. Ring of Fire’s Farron Cousins explains what’s happening.

Number four, three, two, one, Dr. Anthony Fauci has been a thorn in the side of Donald Trump all year. And prior to this year, few people in this country even knew who dr. Anthony Fauci was. He is the leading expert on infectious disease with the U S government. And he has been one of the few people from the Trump administration, to be honest with us, for the most part about the pandemic. Now, when I say for the most part it’s worth remembering in the early days, he came out and said, I don’t know the wearing a mask or whatever it’s going to help you at all. But then he admitted that he was downplaying the effectiveness of masks, because he didn’t want to send the nation into a hoarding, panic and take away PPE that was needed by the doc. There’s, you know what necessarily say, I forgive him for that.

That was a stupid move. Nevertheless, Fauci has come out and publicly contradicted Trump, uh, Fauci has a positive approval rating. Everybody seems to like, Fauci they like having somebody in the federal government during a pandemic that that’s not lying to them every day. Trump wants him gone. And, uh, he hasn’t fired him. Um, because you know, this is not going to look good, especially in an election year, but on Sunday night rally of in course, uh, in of course he admitted to the crowd that he’s going to fire him after the election, the crowd started chanting fire Fauci, which it takes a special kind of stupid to think that we should fire the guy who knows what he’s doing. The, the leading expert on infectious diseases. It takes a special kind of stupid to think we should fire that guy in the middle of a global panic. But that is what these Trump supporters at this rally were. I’m sorry. That’s what you are. If you were there and you were chanting fire Fauci, there is no hope for you whatsoever.

So they’re chanting fire Fauci, Donald Trump fires back. Don’t tell anybody, but let me wait until a little bit after the election, at which point, the crowd erupted in cheers, because they hate smart people. They hate science. They hate anyone crushing their worldview, that Donald Trump of all people is the greatest human being that’s ever lived. I would love, I would love for there to be massive case studies, uh, in the near future. You know, when these people eventually pass on, I think scientists should be allowed to anybody who ever wore a MAGA hat. Not ironically scientists should be able upon that. Person’s passing to extract their brain and look for abnormalities, study it, really get in there and figure out what the hell went wrong. Because for this many people to just blindly fall behind this. So obvious charlatan, this snake oil salesman, who convinces people, that his fat that hasn’t done an ounce of exercise in 50 years is somehow the ultimate male form. What the hell?

I don’t get it. I truly don’t understand it. But then again, as far as I know, I am not suffering from any defects that would make me think these things that the Trump supporters think cheering on the firing of a scientist in the middle of a pandemic is not normal or rational human behavior. They hate Fauci because he is destroying their view that Trump is infallible. And as I mentioned, Fauci is one of the only people from this administration ever to have an approval rating consistently above 50% people like him. People trust him. As I mentioned, he has been honest with us a hundred percent of the time, but he’s still batting about 95%. I don’t know how the batting thing which works. I’m sorry. I’m not a baseball person, but he’s the most honest person they have. Uh, dr. Brix Burks is not going to, uh, be there.

And the problem is how do we navigate a pandemic without somebody like Fauci, even if it’s only for two and a half months, that Trump gets rid of him, you know, suppose Trump loses today. And he fires Fauci Biden will bring him back, but we will be going two and a half months rudderless without any science involved in this pandemic. And we have seen how bad things can get two and a half months. We are, we’re living that right now. I think a lot of people wouldn’t survive that if Trump fires Fauci, but at this point, I don’t think there’s anything we can do to prevent Fauci from being fired after the selection ends, regardless of who wins.