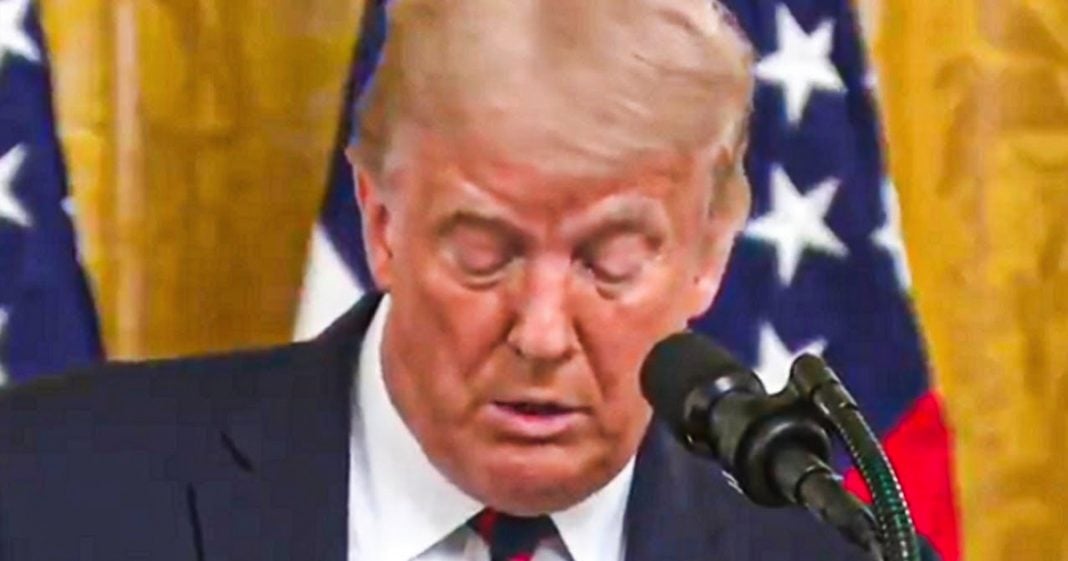 Donald Trump and his gaggle of lawyers are working on stopping the Democratic process from playing out. Trump announced on Wednesday that his legal team would be filing lawsuits to stop vote counts, even though such a move has never been done before on an initial vote count at the national level. He has no chance of winning, so he’s throwing the world’s largest temper tantrum, as Ring of Fire’s Farron Cousins explains.

Well folks, we have reached the legal challenge state of the continued vote count here in the election with Donald Trump announcing that he is sending his legal brigade out there, uh, to States like Pennsylvania to stop the count so that Trump keeps the lead in. They’re probably sending them over to Arizona so that they continue to count because he thinks there’s massive amounts of vote fraud and hidden Trump votes that they’re not counting. Uh, and there’s Biden votes up in Pennsylvania that they’re fabricating out of thin air. None of that is actually happening, but Trump’s legal team is on their way, but don’t afraid. Don’t think for a moment that this is actually going to overturn this democratic process here. And I’ll explain why in a minute, but one of the reasons is because the person who’s kind of leading the legal brigade is Rudy Giuliani.

Rudy. I was only talking in my shirt Giuliani. So I think Roque K um, I don’t think we really need to lose any sleep over fear that Giuliani is going to be able to successfully go in front of any court and say, Hey, I got some news for you before I into that news. What about this Hunter Biden fellow? I’ve got the doc app. That’s just based on what we saw from him on his TV appearances over the past two weeks, podo Giuliani is absolutely incompetent. He is not going to be able to go out there and Mount any kind of serious legal challenge. And by the time he even gets in front of a court or any of Trump’s lawyers get in front of a court or a judge, the voting could already be done. The counting could already be done. And then these legal challenges are moot.

That’s why this is so ridiculous. And that’s why I had said back in the day, uh, which really refers like a week ago. Don’t worry about the legal challenges. You can’t just go in and start filing lawsuits. Willy-nilly you can’t, that’s not how it works. You have to have a legitimate grievance. You have to have standing, you have to have evidence that you were somehow wrong and that evidence doesn’t exist. And people say, well, Bush V Gore in 2000. Yeah. Bush V Gore in 20,002,000. Let’s talk about that. Do you know what that was? That was a lawsuit to stop the recounts multiple, multiple, multiple recounts had been taking place in the state of flow Florida. And finally, after weeks of this, they were, we’re able to get the Supreme court to agree. They’ve been counted in enough. That’s the key word, key phrase there it’s over. And no, they hadn’t been counted enough. You know, the hanging Chad issue, Al Gore won that election fair and square before the Supreme court did step in. Yes, but folks were not looking at a situation like that. 2020 is not 2000. We do need to lose any sleep over the Supreme court coming in and suddenly throwing out votes that have already been counted. That’s not gonna happened.

For all practical purposes. This thing is over liberals, rest, easy. He guy won. He didn’t win by much. It was a nail biter, but he won because people hate Trump. But to Trump’s credit, he did better this year than he did in 2016. He gained with every demographic except for white men, Millions, tens of millions of people looked at the last four years and said, I need another hit of that. That’s something Democrats do need to worry about, but worrying about the legal challenges from Rudy Giuliani and people like Harlan Hill. Yeah, I think we’re okay. I think this is going to be just fine. But the other thing too, again, Joe Biden has three and a half million more votes than Donald Trump. So the whole still talking about who won the election thing is ridiculous. If we didn’t have an idiotic backwards electoral college, this thing would have actually been over and we would have had a clear winner on election night. So I think we all know what the real problem is and where the real legal challenge needs to go. The question is, will president elect Biden have the courage to go there?