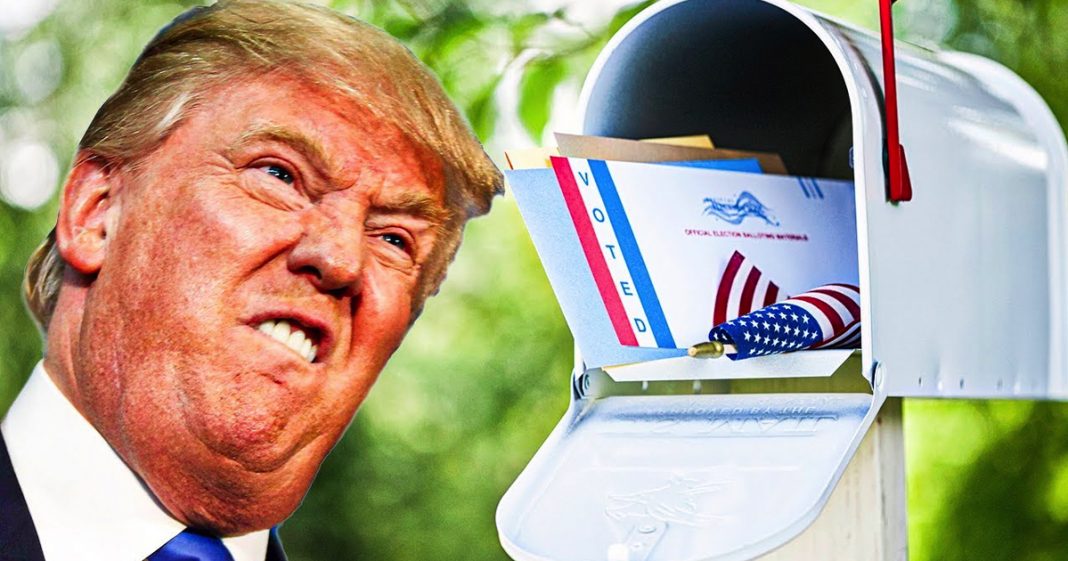 The U.S. Postal Service was ordered by a federal judge yesterday to conduct a sweep of facilities in 12 different states after it was revealed that 300,000 mail-in ballots had gone “missing.” The U.S. Department of Justice let the judge know several hours after that order that they weren’t going to be doing that. This administration believes that it can literally ignore court orders, and if they aren’t held accountable, then they would be correct. Ring of Fires’ Farron Cousins discusses this.

Yesterday a federal judge ordered the us postal service to do a massive sweep of 15 different States. Most of them swing States by the way, um, to find a missing 300,000 ballots that people had mailed in that just never got counted. And yesterday being the last day to get those ballots in for most of those areas. Cause some States actually do say, even if it’s postmarked by election day, if it’s not in on election day, it’s not getting counted. Uh, so federal judge says, Hey, postal service. And this was about 3:00 PM. Yesterday says you have to do a massive sweep to find those ballots in these 15 different States, go out there and do this about 5:30 PM. Us department of justice came back and said, Hey judge, uh, they’re not going to do that.

I know you’ve ordered us to, and it’s illegal to go against what a judge orders you to do, but yeah, we’re not going to do it. What are you going to do? And the answer of course is nothing. Nothing happened. Members of the, so Jay who issued that order, didn’t go to jail members of the post office who did not follow these direct orders from the federal judge did not go to jail. And I guess that’s the end of it, right? Cause that’s what happens to this administration. We have seen them time after time, after time ignore judges orders, we have seen one Betsy Devoss actually held in contempt for ignoring a judge’s orders. What did she get? Or her department got fined a hundred thousand dollars such as comes out of taxpayer’s money. There’s there’s never any punishment. There’s never any punishment for these people. And as long as they continue to break the law, like not even just break the law, let let’s, let’s throw that concept out there, looking you in the face and saying, I’m going to break the law.

They’re daring you to stop them. And then you never do. They’re going to continue to do it. If they pull out a victory in the selection, we are going to see the most lawless administration we have seen since, well, the first four years of the Trump administration, except that’s going to be that on steroids. Every ballot deserves to be counted. Every person who voted deserves to have their voice, I heard they were exercising their right. Trump sabotage the post office intentionally to make things like this happen. This wasn’t an accident. That 300,000 ballots got lost. It was by design. Trump wanted this to happen and now it did, they were told to fix it. And they straight up said no.

And this is the reality in which we live. I wish I had a resolution to the story. I wish I had something to close it with. That would give you hope or at least tell you how it was. But folks that hasn’t been resolved, all I can tell you is that as long as we keep treating these thugs and criminals inside the Trump administration, as if they can get away with breaking the law, they’re going to continue breaking the law and their conduct, the laws that they break. It’s only going to escalate and get worse over time. As long as there continues to be no punishment for it.