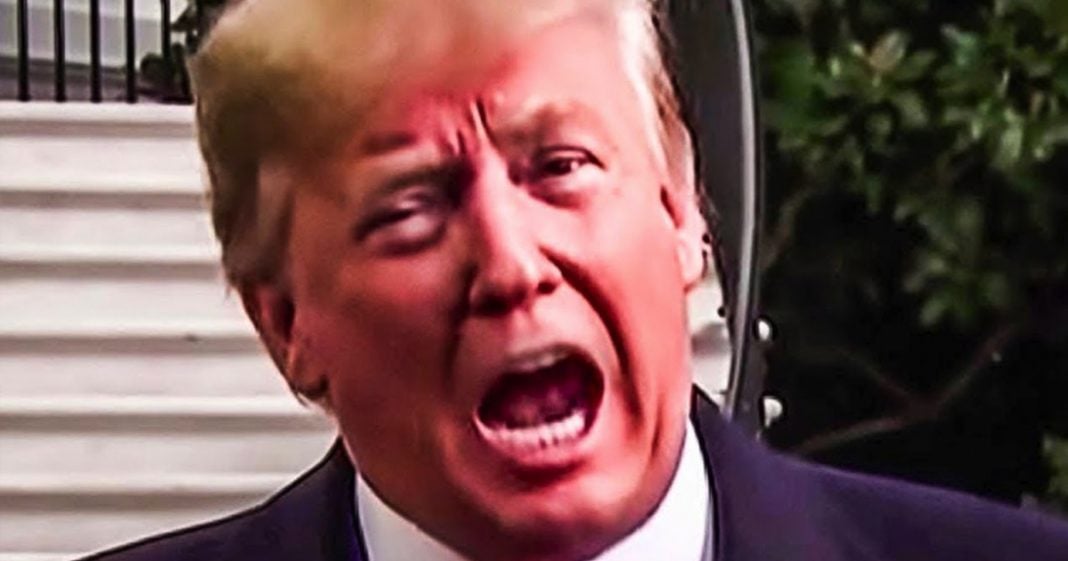 Trump has been spreading lies nonstop on Twitter since the election, and Democratic lawmakers have had enough. They are calling on the social media company to suspend Trump’s campaign in order to slow the spread of these lies that are so dangerous for our country. But Twitter probably won’t budge, even though that have slapped warnings on his tweets to let people know they aren’t true. Ring of Fire’s Farron Cousins discusses this.

Number four, three, two, one Democrats, democratic lawmakers. Here are the United States finally appear to be finding their voice again. And what’s happening right now is that they’re using that voice to call on Twitter, to call on Jack Dorsey himself, to suspend Donald Trump’s Twitter account, because he continues to spread misinformation about the presidential election. Now, uh, these are democratic lawmakers. You’ve got representatives, David Pasolini, representative judge, Jerry Connolly. Uh, they have called for Twitter to suspend them. You’ve had other, uh, Democrats who haven’t necessarily called for suspension, but do want something done. And they’re trying to counter Trump that Senator Tom Udall, representative Nanette Diaz, Barragan. And so these Democrats, the ones who were saying suspend him and the ones who were correcting him, but to a lesser degree, they understand the damage that he’s doing and they understand exactly what he’s doing. And we’re seeing it play out.

We’re seeing it play out in these crazed videos from these deranged Trump supporters showing up, trying to interrupt, vote, counting, trying to stop, vote, counting, demanding it be stopped. And as long as Donald Trump goes out there and claims that this is all illegitimate and it’s all a fraud, he is going to continue to inspire these people to go out there. And next time, maybe it’s not going to be just them shouting or banging on a window. Next time. It could be much worse. We have seen for four years, what his supporters are capable of doing with just the smallest amount of prodding and poking from the president. That’s terrifying. And that is a situation in which no poll worker should find them themselves. And yet here we are. And there they are. I guarantee you, these people do not feel safe in these buildings and they do not feel safe because of what the president is out there doing, telling people, this is a farce telling people that they’re fabricating ballots out of nowhere for Joe Biden or they’re, you know, ripping up and tearing up votes for Donald Trump.

None of that is happening now, Twitter, uh, as I mentioned earlier today, did put a disclaimer on one of Trump’s tweets, just one of them, uh, that was a part of a thread. And the disclaimer said some or all of the content shared in this tweet is disputed and might be misleading about an election or other civil process. But CS a problem is that’s a little mealy mouth too. It’s like, Oh, this could be wrong. We know for a fact it’s wrong, but we’re not gonna, we’re not gonna censor the president, even though he’s endangering human life. We don’t, Oh, we don’t, we don’t want to anger people. Oh, we can’t, we can’t remove false information that could get somebody killed. Oh God, no, we can’t do that. That folks, we gotta be a little bit less sensitive about things like this. And yeah, I do think Twitter should suspend Donald Trump. I think they should also suspend Eric Trump. Who’s also out there spreading propaganda through his Twitter account about, uh, poll workers, allegedly tearing up Trump ballots. That didn’t happen. He shared a video of a poll worker grabbing a blank piece of paper that you can clearly see is blank. Crumpling it up and moving it to the side, moving it to the side. Didn’t even throw in a trashcan, moved it to the side. So.