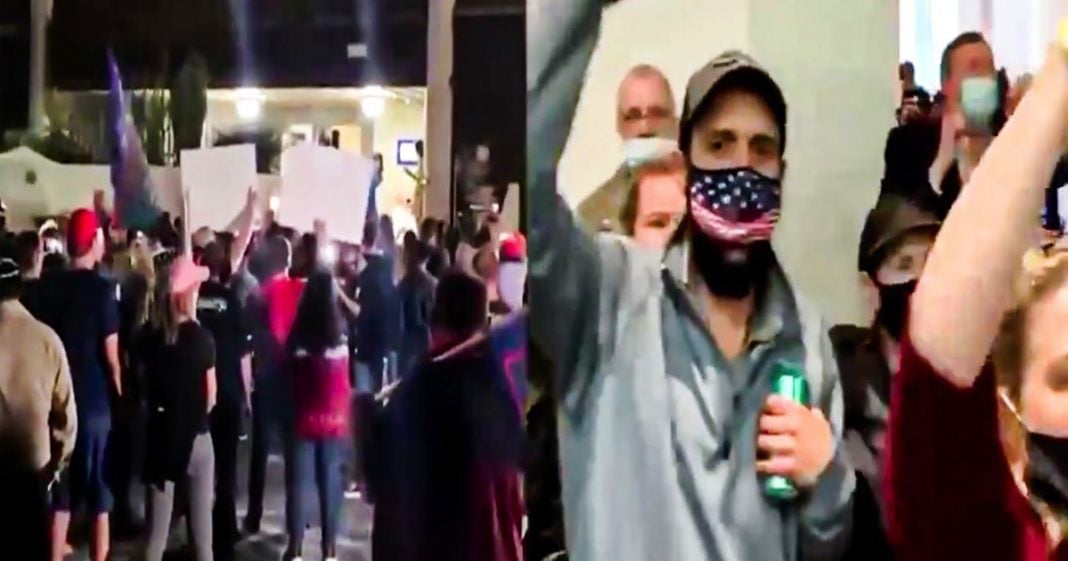 Deranged Trump supporters in states where the votes are still being counted have descended upon election offices, demanding that the votes either stop being counted OR continue to be counted, depending on who has the lead in that state. The videos would be humorous if they didn’t show the decline of the United States in realtime. Ring of Fire’s Farron Cousins discusses this.

If you live in a state that has not yet been declared for either Donald Trump or Joe Biden, then there’s probably a good chance that there’s some Republican protesters in your States showing up at election offices, showing up at the places where they count the votes. And depending on who has the lead already in your state, they’re either demanding that the count be stopped or that the count continue, which that one’s a little weird because they’re showing up at places where people are counting ballots and they’re demanding that they keep doing what they’re doing, which they would be doing, even if you weren’t telling them to do it. So, okay. That sounds like a real smart use of your time. Nevertheless, uh, we’re watching what’s happening in real time is Donald Trump’s cult members are going out there and trying to subvert our democratic processes. That’s what’s happening.

Uh, take a look at this video. You know, we we’ve seen videos emerging all day yesterday of all these crazy Trump supporters coming out, you know, the guy, the guy, I think it was in Arizona or Nevada with his barbecue, freedom, beer, whatever it is, shirt. And he started screaming behind the podium and she’s like, who is to go to they’re taking place. But then there’s the other like real protesters in large groups, believe it or not demanding, as I said, either stop the count or don’t stop the count depending on where they are. So here’s a clip, take a look at what’s happening with these nut jobs. So here’s the thing. You can’t have it both ways your, your, your party, your candidate cannot both want to stop the count and continue the count. In other places. If this thing were to in fact, go to any kind of Supreme court case, they wouldn’t just be able to rule on state by state.

That would be highly, highly doubtful could happen, technically, I guess. But instead, what they would likely do is issue a broad statement. Either continue counting everything, or stop counting everything. And no matter which one they choose, Joe Biden at that point becomes the next president. Because if you stop the count right now than Joe, Biden’s going to get Nevada. He’s gonna get, uh, Arizona. And then he’s going to get his two 70 and he’s going to be president. If you continue the count, Joe Biden is still going to get Nevada. Most likely will keep Arizona, but let’s assume he loses Arizona, but you keep counting. And then he gets Pennsylvania instead, possibly even Georgia, but even without Georgia, he would then become president of the United States. See what I mean? Like there’s no way to slice it. So whatever these nut jobs are out there demanding happen is irrelevant. Y’all can’t stop the inevitable. And the inevitable is that you lost.

That’s just the way it is. And then you have idiots like Tim pool who get online this morning, or maybe it was even late last night, I forget. But he says, Oh, the, the, the liberals, the left is so salty. Cause there’s no videos of conservatives breaking down and crying. Nude. Have you been not paying attention to anything? No. There’s plenty of videos of conservatives. Crike we just showed you one. We just showed you how crazy conservatives are going, but you know what? It’s not even fair to call these people conservative. So these are cult members. These are members of Colt 45. These are not rational thinking human beings, because if they were, they wouldn’t be going out there and demanding that we as a country stop the actual process that the constitution calls for technically. Yeah. What they’re calling for is unconstitutional. And if you don’t consider that whiny and crying, then I don’t know what constitutes that.