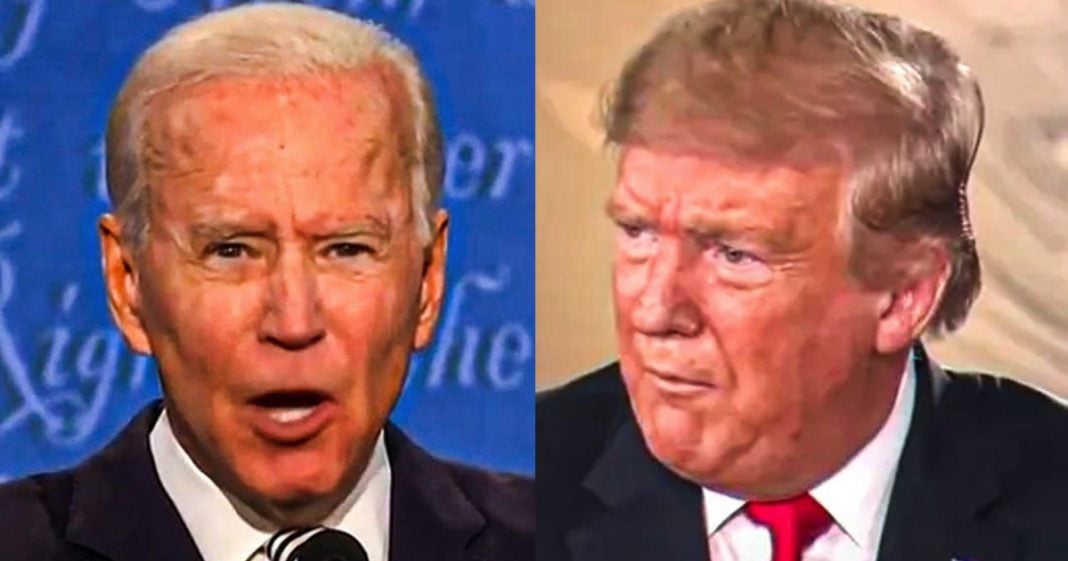 Donald Trump gave a victory speech in the early hours of Wednesday morning, even though there is no clear winner at this point, and Joe Biden technically is leading with the delegate count. Vital midwest states are still counting millions of ballots, and Trump is trying to convince his followers that massive fraud is taking place despite a complete lack of evidence. Ring of Fire’s Farron Cousins discusses this.

Well, the election was yesterday and as many had predicted, we have no idea who won this thing. Uh, you still have multiple different States. Most of them in the Midwest, including a non Midwest state, North Carolina, still counting votes. So we do not have a definitive winner in those areas, which means those electoral votes have not yet been allocated. Uh, so we don’t know who won right now. Biden, uh, as of me sitting here, Biden has a 14 point, uh, electoral college advantage, but we are still waiting on results from wishing, wishing, Wisconsin, Pennsylvania, Michigan, North Carolina, and Georgia. Um, Trump holds leads in most of those areas and most of the vote has been counted. And Trump last night threatened to go ahead and file as legal challenges to stop the counts because the more votes are getting counted. The worst it’s looking for Donald Trump. So Trump goes out last night, uh, actually early Wednesday morning.

And, uh, he declares victory says that the continued counting of votes is quote a fraud on the American public and then embarrassment counting votes actually going through this democratic process that we have is an embarrassment and a fraud. The president said during his, uh, victory speech, not exactly the tone you would want from somebody giving a victory speech, but that’s what it is. Um, and it’s important to remember that back in 2016, Trump won that election because the electoral college, but he won it and he still thinks those results are illegitimate. So there’s no way in hell he was ever going to look at this election as legitimate. So that’s where we’re at right now. Um, Wisconsin, you still have a couple of hundred thousand votes to count. Uh, Pennsylvania. You got a little over a million, same thing with Michigan, North Carolina, a couple hundred thousand, same with Georgia.

Uh, I don’t think for a second, by the way, the Georgia is going to flip. Uh, the biggest surprise of the evening for me was what happened in Florida. And I got a video coming up later on to talk about how wrong I was about Florida, because man was I wrong? Uh, so I’m doing a whole video on, on me being wrong on that. But overall Democrats did not have the night that they wanted. They did not have the night that the polls said they were going to have, uh, $200 million spread across two Senate races only for Democrats to lose. That was a Lindsey Graham and Mitch McConnell who are going back, uh, to the Senate and more on that coming up later as well. But overall lost a couple of house seats, you know, only flipped one Senate seat. As of right now lost the Doug Jones seat, which was expected, uh, lost it by massive margins.

So you’re sending a inexperienced radical Tommy Tuberville to the Senate. That’s not good. Um, Cory Gardner did lose. Um, so that seat now Hickenlooper’s Arizona flipped. So it was good, Arizona blue, uh, and you know, Democrats did, I guess they also got that Senate seat. Uh, so technically to flip, but still not enough to get the majority. So even if Biden rolls this out, uh, as the votes continue to get counted, probably looking at dealing with a Republican Senate, which means to quote Biden himself, nothing will fundamentally change a Republican controlled Senate is not going to let a president Biden do anything, but a Republican controlled Senate is going to let a president. Trump do everything. And that’s horrifying another four years of exactly what we’ve seen in the past four years. Plus dr. Fauci likely being fired, uh, after all the results are counted, not a good night for Democrats for the democratic party, I should say, but for progressive ideals, absolutely across the country, we saw States legalize marijuana.

We saw States legalize mushrooms. We saw Saul States, decriminalize drugs. We saw States like right here in Florida, voted to increase the minimum wage to $15 an hour. Progressive ideas won the day, regardless of who won on those ballots, progressive ideas, progressive values coast to coast, even in some of the reddest of States, they had the biggest night out there. Uh, we’ll keep you updated as to what happens with this. This could take several days, uh, as the States continue to count votes. So we’ll see what happens. Bins. Hopefully it breaks. And Trump does not get another four years, which would be a disaster. Uh, so again, it’s one of those hurry up and wait moments.