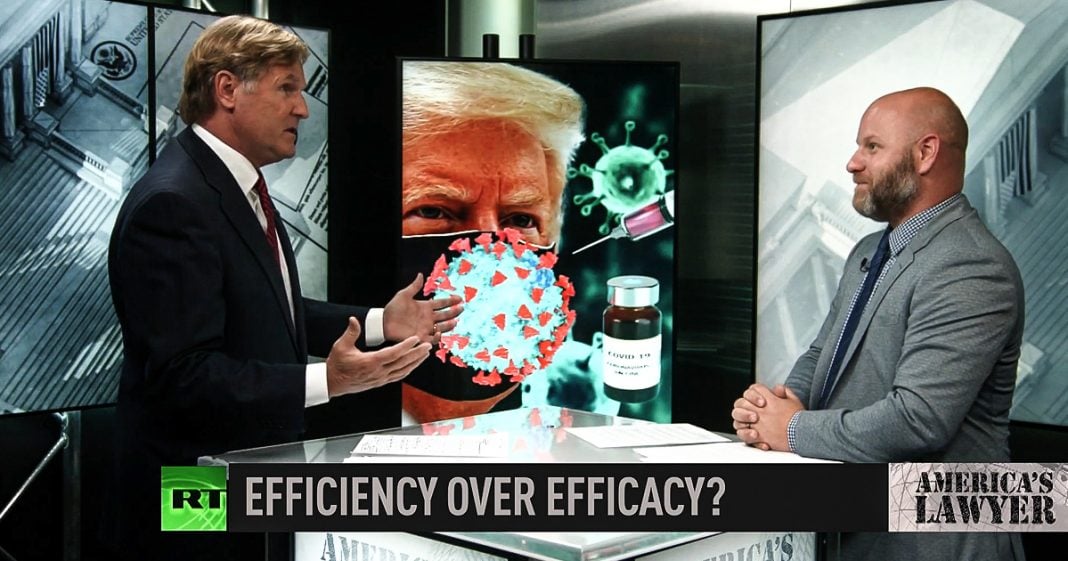 Mike Papantonio:             The Trump administration is paying big bucks to drug companies to rush a COVID vaccine that, chances are, is not very effective. This is crazy, man. They’re giving billions of dollars to drug companies right now. Ordinarily it takes 10 years, 10 years to develop a vaccine. If everything’s perfect, you can do it in four years, but that doesn’t stop the Trump administration. They say, ah, no, we’re going to pump billions of dollars into companies that have never even worked on a vaccine before. What’s your take?

Farron Cousins:                  Well, my immediate reaction reading this story before coming here today was, you know, Pfizer, Pfizer, AstraZeneca, J & J, Moderna, I thought I’m pretty sure you’ve been in court on the opposite side of each and every one of these.

Farron Cousins:                  And, and so that’s what made me think, you know, looking at who is doing this, and who’s getting billions from this administration to do it. Would you, would you trust if one of these companies came up to you right now and said, all right, we’ve got the COVID vaccine. Will you take it?

Mike Papantonio:             Everyone of these companies have been sued so many times for defective products. I’ve lost count. And you think the FDA is there to protect you? The FDA is being now urged to, to give a pre-approval of the vaccine before we have any idea what the clinicals actually look like.

Mike Papantonio:             Drug overdose deaths have spiked at an alarming rate during the COVID 19 pandemic, which has already claimed the lives of more than 225,000 people just in America. Brigida Santos joins me now to talk about this. Brigida, how many States have reported spikes in overdose deaths and what drugs are people dying from?

Brigida Santos:                   Well, since March of this year, when many States began implementing those stay at home orders, at least 40 States have reported a spike in opioid overdoses. Now, nationally overdose deaths had already risen about 10% between March of 2019 and March of this year. But that trend continues with people now overdosing on opioids, cocaine, and methamphetamines at even higher rates, about an 18% spike in many States. Now this is largely because the coronavirus pandemic has exacerbated existing problems with dealing with the overdose crisis. Since those lockdowns began, it’s been difficult for people to access harm reduction services, addiction treatment, and even needle exchange programs. The pandemic has also caused disruptions in the supply chain for the opioid overdose reversal drug Naloxone. And of course, Mike, more people are experiencing pandemic related loneliness, homelessness, poverty, and stress, which only contributes to this problem further.

Mike Papantonio:             Yeah. Next we’ll have, you know, frogs falling from the sky, Jesus. How do antinarcotic laws play a role in fueling this epidemic? It’s, it’s kind of an interesting twist on this, isn’t it?

Brigida Santos:                   It is. Look, the drug enforcement agency has been cracking down on distributors and providers of prescription opioids for obvious reasons, but that includes cracking down on two drugs that are proven to treat opioid addiction, methadone and buprenorphine. Now this has driven many addicts to the streets to buy illicit opioids like heroin and fentanyl.

Mike Papantonio:             You know, corporate news typically focuses on opioids and it’s been horrendous. As you know, I’m supposed to try the first case going to trial in West Virginia, this is one of the test cases for the opioid litigation. It was just continued because the, because of the COVID 19 virus, but you know, as we look at it, there’s also meth epidemics in the US and they haven’t been covered all that much. Meth is cheap. Anybody can make it. And it’s, it’s a drug that’s really causing as much havoc as opioids in a lot of ways, isn’t it?

Brigida Santos:                   Yeah. Look, we’ve got two drug epidemics, yet, the media and politicians typically just focus on the opioid epidemic, but meth use and addiction is also on the rise, especially here in the Western US. Between 2011 and 2017 meth overdoses more than quadrupled and last year alone, they spiked about 25% more. Now across the Midwest and the West 70% of local law enforcement agencies now say that meth is their biggest drug threat. Yet policymakers in Washington have mainly allocated funding and resources to curb the opioid epidemic. The demand for these drugs in the US is incredibly high. Now, just this month, the DEA recovered a record of 2200 pounds of methamphetamine, 60 miles South of Los Angeles in Riverside County. This was the largest domestic meth seizure in history for the DEA. And just one week later, US customs and border protection recovered over 3000 pounds of methamphetamine at San Diego’s Otay Mesa port of entry and that was CBPs second largest meth bust in history. Now heroin and fentanyl were also recovered at the border and the estimated street value of these drugs from that particular bust totaled over $7 million. The DEA’s acting administrator says these two seizures are more than enough to provide a dose of meth for every man, woman and a child in the United States and Mexico. So this is a very big problem in the US.

Mike Papantonio:             Yeah, let me give you something a little known fact here. You’ll love this fact, seven years, six years ago, Congress voted to take away the DEA’s right to do what they should have been able to do with opioids. In other words, if a, if you had a pharmacy or a company that was involved in selling opioids and they were selling to numbers well, well, outside the norm, the DEA had the right to shut them down before they could even continue doing business. Now, Congress six years ago said, no, that’s we, we need to take that right away from the DEA. We need to let that business continue selling opioids and because if we don’t, we’re really kind of interfering with, inner, inner-nat, with national commerce. That actually happened. Most people don’t know it. Most people don’t know Congress and the Marino bill actually voted to take away the DEA’s rights to do anything about the opioid crisis. That’ll be something I think we’ll probably be talking about in trial, up in West Virginia. Brigida, thank you for joining me. I don’t, I think this is going to get worse before it gets better. If I look at the, if I look at the chart of how this, how this epidemic is, is continuing to grow. Thank you for joining me.