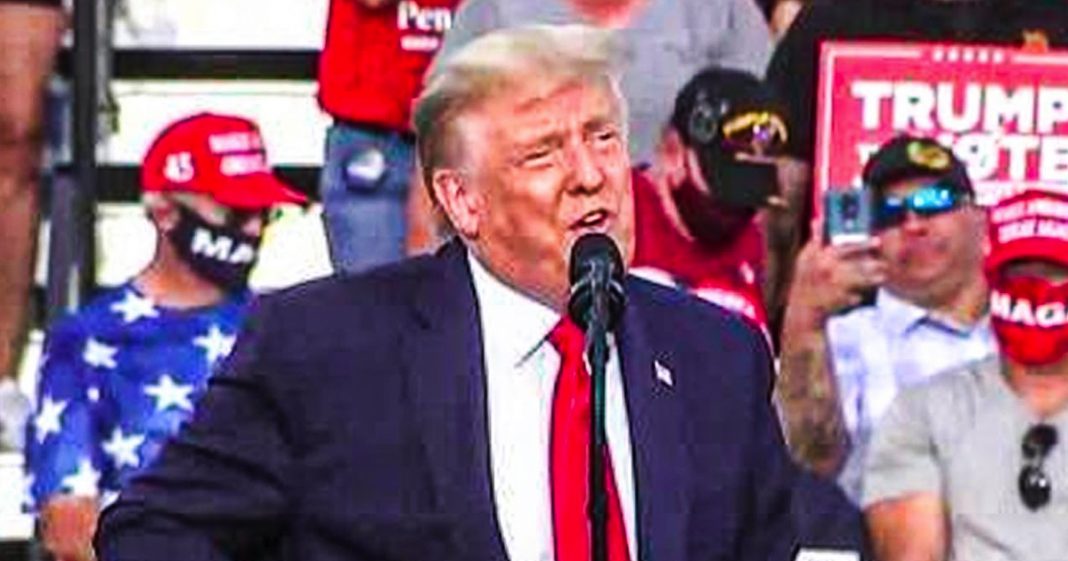 According to a new study, Donald Trump’s rally blitz in the final few weeks of the campaign has now been linked to at least 30,000 COVID-19 infections. This is the least surprising news of the past year, as it was not only completely obvious, but everyone with an ounce of intelligence predicted that this would happen. Even Trump knew this would be the result, he just doesn’t care about his cult members, as Ring of Fire’s Farron Cousins explains.

In just the last seven days we have seen rally goers, uh, Donald Trump’s rallies, uh, be left out in the cold to get hypothermia. We have seen them suffer from heat exhaustion, have to be sprayed with fire hoses and then taken to the hospital and treated. And then of course, over the weekend, we saw once again, Trump’s supporters left out in the middle of nowhere, no buses to come pick them up. And they were either forced to walk miles, uh, to go get back to their vehicles or wait hours upon hours for buses to finally show up. But let’s not forget the big one either. You know, all those things are bad and all of those things were created by the Trump campaign selves, but they’re still the COVID factor.

Run it around there. And according to a new study that came out this weekend, at least 30,000 new cases of COVID-19 can be linked to Donald Trump’s rallies that he held between June and September of this year. Those rallies, those events that he did, including the one that ended up killing Herman Cain, 30,000 COVID-19 infections directly linked to Donald Trump’s super spreader rallies. Now that’s not surprising in the least. I mean, this is honestly the least surprising news we have heard all year and yeah, they did study this. You had scientists, you had medical experts who looked at this, they crunched the numbers. They did the tracing. You know, they did the projections. This is what happens when you go to a Donald Trump rally, it increases the number of infections in an area. And then those people, because they’re not all from that same little clustered area, take it back with them wherever they came from. That’s just science. That’s basic virology, infectious disease study. That’s what happened.

So what now? Well, over the weekend there was a report saying Donald Trump may continue doing his rallies even after he gets reelected. And I saw a lot of folks, a lot of folks I admire and respect on, on, on Twitter, uh, re, tweeting this and talking about, Oh yeah, yeah, he’ll definitely do it folks. I don’t buy that for a second. Do you, do you honestly think this man is going to go out there and hang out with these riff Raff who he couldn’t stand. He wouldn’t even let them into his own country club. You think he is actually going to still go out there and spend any time with these people at all? Absolutely not. Maybe I’m wrong. Maybe he looked, Loves the applause and adoration so much that he’ll keep doing it, but this isn’t exactly the kind of crowd that’s going to fork over money to go see him.

So even if he attempted to continue doing the rallies, it come to a pretty quick stop. Once people realize, Oh, I have to pay to get here. Now that’s not going to happen because after all, if Trump’s not running a campaign, he can’t spend campaign money on it. You have to spend his own money on it. And those rallies are expensive. So you’d be paying three, $400 just to go in and listen to Trump rant about the media for 90 minutes, when you could just watch his Twitter feed for 90 minutes and get the same thing. So hopefully once his campaign ends, which is effectively tomorrow, one way or another, um, hopefully the rally stop because when the rally stops infections are going to go down slightly. Now, is that going to cure the pandemic? Absolutely not.

Is it even going to really make a dent in daily numbers? Nope. But what it could do is prevent people from dying. And I don’t care if they are mega hat wearing, you know, Trump cultists, they shouldn’t die from this. They shouldn’t die because they were irresponsible and Trump encouraged them to be irresponsible. I’m sorry. I just don’t feel like they should. That’s the reality in which we’re living. These Trump rallies are death traps. I swear to God like the, dude’s going to find a way to kill ya. If you come to one of his rallies, come for the, COVID stay for the hypothermia. But if you’re in the South, good luck, maybe we’ll shoot you with a firehose. Cause You know, it’s 90 degree heat, a hundred percent humidity. So yeah, one way or another nobody’s getting out of here alive.