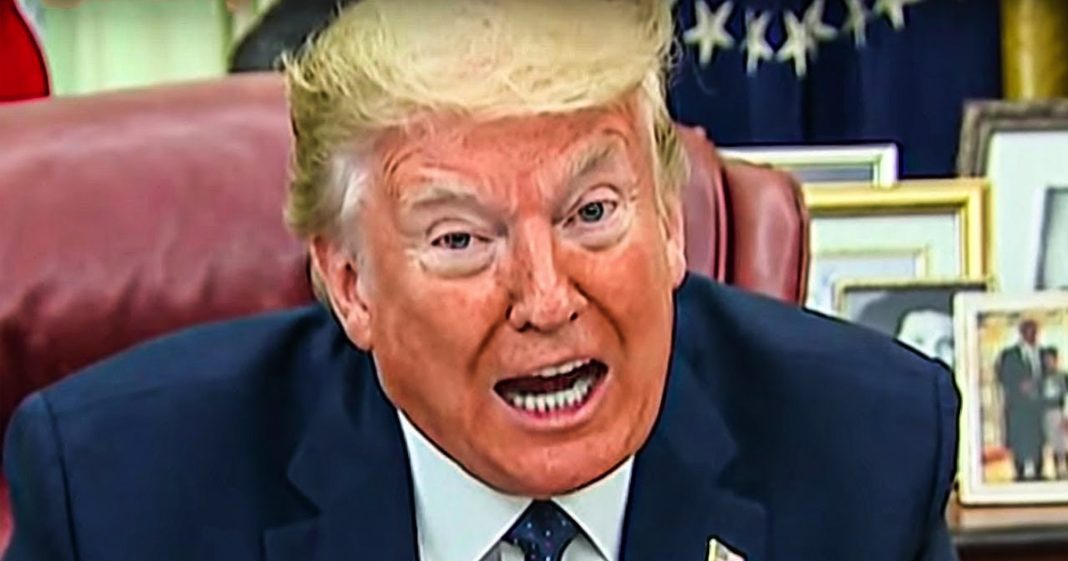 According to reports throughout the weekend, Donald Trump is preparing to declare victory early on Election Day, thus sowing chaos and confusion among his followers and detractors. This is exactly what he wants to happen – he wants his followers to think that he’s already won, and that way when the real results come in they will think that he was cheated. Ring of Fire’s Farron Cousins explains what’s happening.

Over the weekend. A story emerged about Donald Trump, uh, most likely to, uh, declaring a premature victory on election night. Um, also for what it’s worth, they, they’re also going to have a massive indoor, probably masculine party at the white house, ready to go for Donald Trump’s victory because this man is convinced nothing could take the presidency away from him. Now behind the scenes, things are a little bit different and I will get into his decision to declare premature victory in a moment. But I do want to talk about something else he said, and this got kind of glossed over in all of these stories. He said, as soon as the voting stops, our lawyers are ready to go in. They will have their lawyers ready to deploy is what he said. Trump said this. So here’s what he’s going to do. He is going to go ahead and declare the premature victory, because that is going to tell his base.

He won. They’re not going to look at the numbers. They’re not going to think that he is lying to them. They’re going to think that he is being honest in that the entire thing is finished and that he won at the same time that he has convinced his followers. He is one he’s going to be having his little party and all of his lawyers, the Republican lawyers are going to go out there and start filing the suits to have the voting stop or the counting stop. That’s what the lawyers are for now. He can’t just Sue because he doesn’t like the results of the election. But if they’re still counting votes, if you still have votes coming in from overseas, which is what happens mostly with military members, by the way, military, this man doesn’t want your vote to count. You still want to waste it on him.

Anyway, he, he and his lawyers are going to be arguing that this has to stop. We have to know on election night, who is the Victor. And as I pointed out last week, this could literally go either way. If Trump is not ahead on election night and he stops the counting. If they’re successful in that, you’ve just cost yourself the white house. So instead his lawyers are going to have to switch it up and argue. No, no, no. Keep counting, keep counting, keep counting. Oh God don’t ever stop counting, but you’ve already had your, your Supreme court come out and tell some States they’re not allowed to keep counting. Like you’ve screwed yourself on that. That, that was a swing state too, by the way. So good luck on that. Um, the, I mean is every vote should count and every vote should be counted.

And because we can’t trust our voting systems, some places have super high tech. That’s easily manipulable or other places are running with technology from the 18 hundreds. Not exactly a fast way to do this. So it is what it is. It’s going to take some time. We may not have a clear winner on election night, but that’s not the most likely scenario. I know everybody on social media is talking about, we may not know whenever everybody take it down, take it down. That is the most extreme scenario. And it’s considered the most extreme because it’s the least likely to happen. So relax. I know everybody’s trying to tell everybody, Hey, it could be bad. Everybody be on guard and you should be on guard. You really should. And it could be hell tomorrow could also be, Oh, okay. That’s the results we don’t know. We won’t know.

But the biggest issue we’re going to have is Trump with his premature victory declaration. And he’s going to do that to convince his base that no matter what happens from that point out, even if we’re looking at the results coming in and Trump is getting just blown out and Biden has, you know, over 300 electoral votes before 6:00 PM, Trump would still declare victory in his idiot base. The cult members would believe it they’d be like, no, he won. He said he won. He wouldn’t lie to us. It’s not like he’s done it more than 20,000 times of the last four years. Nope. None of that ever happened. He’s telling us the truth. The media is lying. Trump’s president, Biden’s illegitimate. Let’s take to the streets and be violent. That’s what will happen. That’s why he is doing this. That’s Trump’s motivation to convince his base that no matter what happens, he won. He wants them to get dangerous. We’ll have to wait and see if they listen.