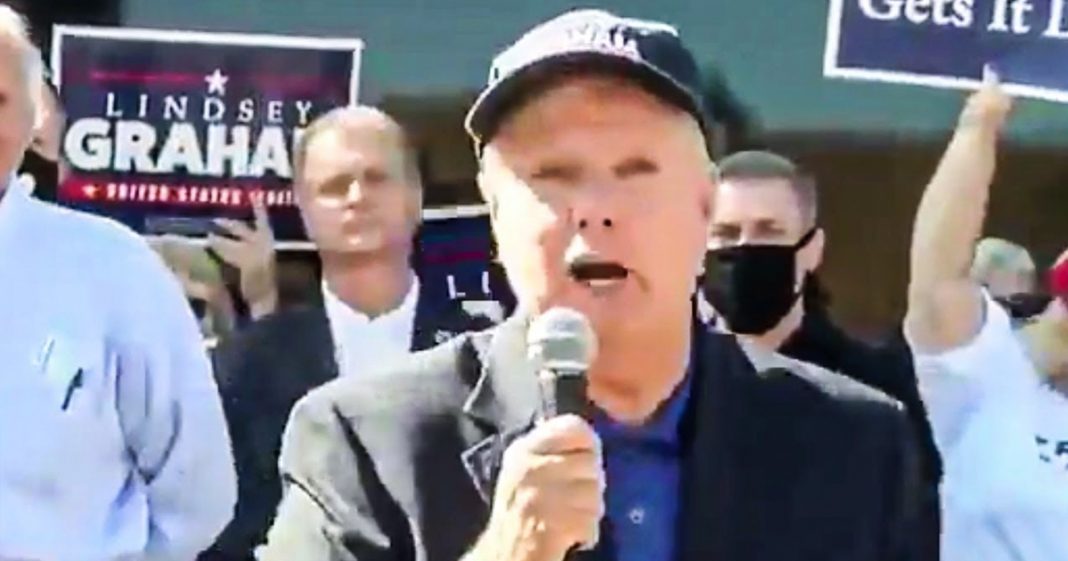 Lindsey Graham is at a very high risk of losing his Senate seat, and so he fell back this weekend on one of the Republican Party’s oldest tropes: Sexism. Graham told a small crowd that women have a place in society, but only if they embrace traditional roles of what conservative men believe they should be. Graham and his fellow Republicans would love to see the United States revert back to the 1930’s, in more ways than one. Ring of Fire’s Farron Cousins discusses this.

Lindsey Graham Republican Senator up for reelection this year, uh, has held a seat forever. He’s facing an uphill battle and that’s an uphill battle that ends one way or another tomorrow. So the last day or so we’ve been in the final hours, technically of these campaigns and Lindsey Graham, knowing that his opponent has outraised him. I think by almost double what Graham has pulled in, uh, seeing that the polls are neck and neck, the race is now considered a toss up. Lindsey Graham went out there, spoke to a small crowd yesterday, a crowd that Donald Trump would absolutely mock if a Democrat pulled in that kind of crowd and, uh, reverted back to the old Republican staples, right? When you got nothing else to do, what do you do while you attack women’s rights? Of course, and you bring back the culture war here is Lindsey Graham’s final pitch to the voters of South Carolina. Take a look.

Lindsey Graham: I want every young woman to know there’s a place for you in America if you’re pro-life, if you embrace your religion and you follow a traditional family structure, that you can go anywhere, young lady.

That’s right, ladies, if you want to be a part of society, if you want to be accepted, if you want to be accepted in society, barefoot and pregnant, standing in the kitchen, making food, traditional Christian family values. So it says Lindsey Graham, the guy who coincidentally is not married. I wonder why I wonder why Lindsey Graham can attract a woman with that kind of thinking. I wonder why they’re not just lining up throwing themselves at Lindsay Graham. And I’m not trying to imply anything that others have implied. I’m just saying when you have those kinds of backwards thoughts about women, uh, it’s kind of hard to find one. That’s willing to say, Oh, you know what? I’ll throw all my values away to, to be with this man who thinks I should have no rights. But folks, what we’re witnessing here is actually, this was a good case. Study of Republicans in general. This is what those Republican rats do when they’re backed into a corner. And that is what Lindsey Graham is.

He is backed into a corner. So he falls back on those old Republican staples, uh, women should be home and in the kitchen and they shouldn’t have any rights to know if you don’t do that. You’re not a traditional family. I’m a traditional family man, even though I don’t have a family, I’m so traditional. Look at me, love me. I’m just like you. We have South Carolina, Southern conservative values. Don’t let the other man take those away boat for me. Lindsey, Graham has no values by the way. He is not pro-life Lindsey. Graham would send every single troop. We have enlisted in the U S military overseas to die just because Lindsey Graham loves war so much. I mean, I remember when Lindsey Graham was running for president back when we were watching those 2015 presidential debates, every question Lindsay Graham was asked whether it was about the economy.

If it was about the environment, no matter what it was about Lindsey Graham would bring up terrorists overseas and we got to take them out. He absolutely drove every single thing back. Cause I wrote about it at the time, drove everything back, Uh, terrorists are bad. We’ve got to go. We got to go take them out and be a Senator troops over there. Let’s get them. Uh, well sir, you were asked about the minimum wage. Well, I’ll tell you who doesn’t have a minimum wage Qaeda. See, I Mean, that was an extreme example, but that’s the kind of thing Lindsey Graham does. He doesn’t know very much about things. I’m sorry, Republicans, but he doesn’t. If Lindsay Graham had been running in any state, that’s not South Carolina or Kentucky probably, uh, he, we wouldn’t know who he is. He wouldn’t exist in the world of politics.

He’s got that Southern twine. He’s got that Southern charm Able to sweet talk voters with absolutely nothing. But from the looks Of it, voters in South Carolina are starting to wake up. They understand that Lindsey Graham has nothing to offer them, except for backwards ways of thinking, wanting to take the United States back to the 1930s in more ways than one. That’s what you get with these Southern Republicans. They’re not actually going to do anything to help you. Oh. And believe it or not. Even when they have the authority to do so. They’re not going to do anything about those culture war issues that they love the drum up to get you all mad and vote for them. I mean, George W. Bush, His big thing was let’s get rid of abortion. He had a Republican white house, Senate house, Supreme court, he put Two justices up there. Do you know how many Times they made abortion illegal?

Uh, none As Republicans don’t actually, they can’t actually achieve that goal because if they achieve that goal, what are they going to run on in the future? I wish more people would wake up to that. And to be honest to a certain degree, Democrats are kind of the same way. They know that it’s really, really difficult, even for conservative judges to overturn in established precedent like Roe vs. Wade, just because conservatives have the majority doesn’t mean they’re actually going to have the opportunity or the, uh, We’ll I guess we Should say to actually do that. You, you really, Really just can’t you could Some things. Yes. I’m not saying women’s rights. Couldn’t be curtailed. I’m just saying both sides use this issue to scare people.