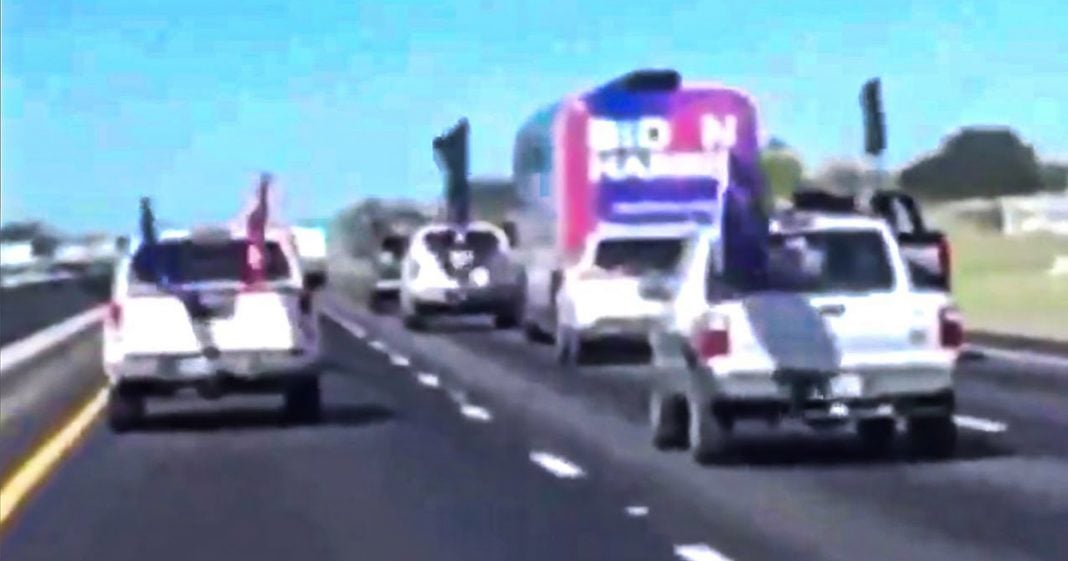 From New Jersey to Texas, crazed Trump supporters spent the weekend using their vehicles to cause mayhem across the country in Trump’s name. This can’t be a good strategy, even if the President is trying to encourage it on social media. Ring of Fire’s Farron Cousins explains what’s happening.

Over the weekend, crazed Trump’s supporters all over the country from New Jersey down to Texas, decided to take it upon themselves to create traffic problems. Um, I guess as a way to help Donald Trump, uh, one of the most egregious incidents took place in Texas. Uh, and this actually happened on Friday. You had the Biden campaign bus traveling from San Antonio to Austin. Uh, right. I guess when they got kinda on the off ramp there a gaggle of Trump vehicles with Trump flags, surrounded them and ended up actually, uh, what looks to be trying to run a staffers vehicle off the road. Um, take a look here is the clip of that. Uh, I guess motorcade down there in Texas here, it is

Running them out of Texas. It is hilarious. I’m about to run out of gas, which I’m sure some of you would love. Look at that. Oh my God.

So that’s what happened in Texas. You know, we have attempted vehicular homicide. Um, there’s very strict laws by the way, against intentionally hitting a, another motorist, uh, that is taken as a very, very serious crime. So hopefully that person’s going to be prosecuted. Um, shouldn’t be that hard to track them down. There’s videos. There’s photographs of all of this. Uh, we know their vehicles, their makes their models, their, uh, tag numbers. So hopefully the, the police are on it. The FBI has said they are investigating this shouldn’t shouldn’t need too much of an investigation. Just find the jackasses and, uh, go from there, prosecute them from there. Here’s the problem though, Donald Trump has already tweeted out that he doesn’t see that they did anything wrong. He’s encouraging this. He is encouraging this psychotic behavior from his supporters. And as I pointed out earlier, this was not the only incident that happened over the weekend.

Uh, up North New York, several places in New York, in New Jersey, you had Trump’s supporters, you know, get in their little caravans with all their flags and then just stop in the middle of the road or in the middle of a bridge and completely shut down traffic. Uh, cause yeah, last time that happened in New Jersey, shutting down, traffic worked so well for the Republicans. Uh, you shut down traffic and then you just, you just stand there like an idiot, acting like you’ve accomplished some great feet or that you’re somehow helping your candidate. I, this is all illegal folks. You know, the candidate who literally screams law and order every single day on his Twitter feed is now encouraging his supporters to be lawless. Now there’s not a ton of people doing this there’s enough to make it a threat. Absolutely. But this is not the majority of Trump supporters.

This is not a majority of Republicans, but I’m going to use their own logic against them right here and say that any Republican, any Trump supporter that doesn’t come out and immediately demand that this action stop immediately denounced and disowned these supporters then yeah, you’re right there with them. That’s what you do to us all the time. So I’m just throwing it back at you, right? Except, you know, we actually protest grave injustices. You know, we don’t want black people to be slaughtered by police officers. Uh, y’all just want your crazy cult leader to not get voted out of office. Well, one of those actually kind of feels legitimate while the other one just feels a little bit superficial, selfish. I don’t think it’s that hard determine, which is which here either. But the point is these Trump supporters, uh, depending on how things go tomorrow, this is going to get worse.

Everyone be prepared, everyone buckle up, everyone protect yourself. And I’m not talking about go out and getting a gun or a weapon or anything like that. I’m saying be on high alert, watch out for these people, call the police on them. If you need to. Although in Texas they outnumber the police. I think the number was 50 needle one. Um, in in fact, some areas, the police were actually escorting these jackasses. So I don’t even know if calling the police is going to do any good. You know, the ads they’re running right now saying, Oh, it Biden’s road. You can’t call the police. You can’t call the police in Trump’s world because they’re working with these sons of . That’s the reality under which we’re currently living. So I guess to sum it up, I don’t know. I don’t know. I don’t have any advice. I don’t know what to do, but I do know that things are going to get crazier as the week progresses because these Trump fans are not going to let up no matter what happens Tuesday, they’re going to feel Donald Trump got cheated in some way, even if he wins or if he wins, they’re going to feel vindicated and they’re going to get even crazier. I don’t know, be on alert. That’s the best advice I can give anyone right now.