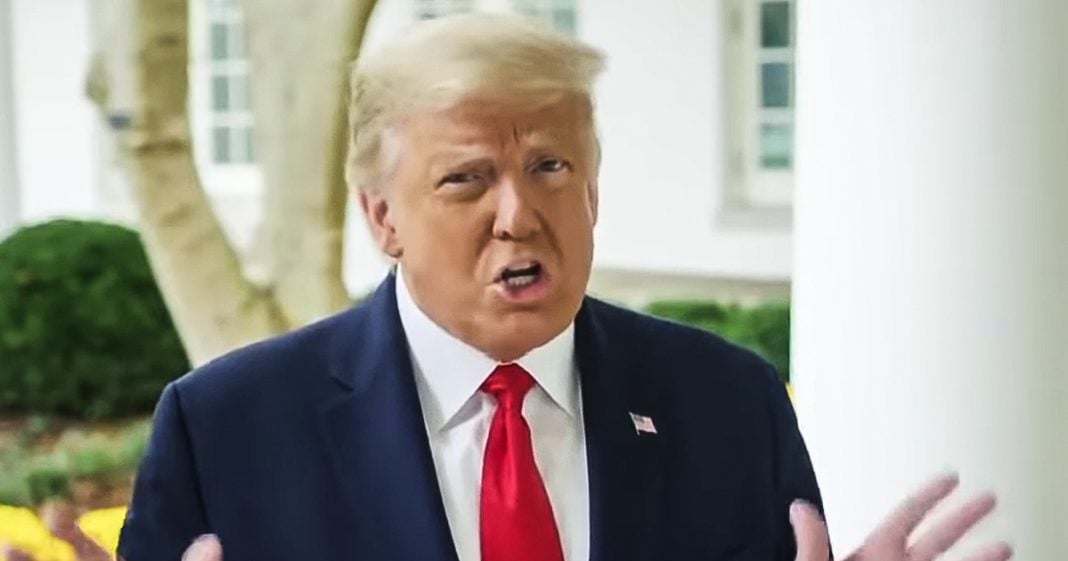 Across the country, pro-Trump groups have shown up to disrupt early voting, and these issues are only expected to get worse on Election Day. Voters need to be armed with the information available to protect themselves and their rights, and Ring of Fire’s Farron Cousins explains what to do in these situations and who to contact.

A few weeks ago, we talked about the fact that Donald Trump was a recruiting, what he called an army of poll Watchers to go out there and essentially intimidate voters around the country. And because early voting has been so intense and we have seen tens of millions of people show up in record numbers to vote early. We have also seen these Trump army, uh, the Trump army show up to intimidate people. Raw story, actually just put together a wonderful list of just some of the incidents where Trump’s supporters have shown up to intimidate and harass voters, which is illegal by the way, uh, in Miami and armed city police officer full uniform, uh, now faces disciplinary action after wearing a Trump campaign mask while directing voters at the polls, uh, in Nevada city, California, enthusiastic Trump supporters in cars and trucks held a rally around a ballot drop-off site, making it difficult for voters to get through, to leave their ballots, uh, in Miami and armed city police officer in, Oh, sorry.

That’s the same one. Uh, in Baldwin Hills area of LA middle-class black neighborhood, a ballot drop box was set a fire forcing state officials to retrieve ruin balance and track down voters for replacements in Albuquerque. A convoy of pro-Trump trucks spent a couple of hours honking and yelling near a voting site, forcing voters to one, the way through a list goes on and on. And we here have talked about other instances as well, like where those arm, Trump campaign people, they said they were from the Trump campaign showed up to just kind of post up outside the voting place. But folks, we have been warning for a very long time that these kinds of things would happen. And this is just the tip of the iceberg of the horrible things that we can expect to take place on on election day. I mean, we’re already seeing them in early voting.

Imagine what’s going to happen Tuesday. So here’s the thing as promised, I told you back in the day, uh, back in the day, it may sound like it was years ago. I told you recently we were going to let you know what to do if that happens. So here it is. Write this number down, save it in your phone. Save it as a note. This is the phone number you need. Election protection hotline, one eight, six, six, our vote one eight, six, six, our vote that’s +1 866-687-8683 election protection hotline. If you were in line polling place in anybody comes up and starts asking you questions about your eligibility. Where are you from? Were you born in the United States? Do you have a criminal history? Do you know, not engage them, do not respond to anything they say, pull out your phone and you call that number and you report them.

And if you’re there with somebody else, have the other person video, the entire encounter, get the person’s face on video, get their body on video so they can be identified because of voter. Intimidation is illegal and we’re going to report these people, all of us together. We’re going to do this. We’re going to make it happen. We’re going to show the Republicans that their voter suppression tactics aren’t going to work. So again, if you go to the polling place and you are harassed intimidated, if you are asked to provide documentation that you know, your state does not require eight, six, six, our vote, that is the number to call. Get them on the line. They have lawyers ready to go. They can protect you. If you’re in line before the polling place closes and then they shut it down and say, sorry, go home, call the number, get the lawyers on it. They will handle this for you. Do not leave that line. Do not be intimidated. Do not let people force you out eight, six, six, our vote. Remember that number? Share it. It’s on my Twitter page at fair and balanced, go retweet it, send it out. Copy and paste in your own tweet. I’m not even looking for likes and retweets here. Get that number out, get the information out, share it with them, everyone, you know, because we are not going to let the Republican party steal another election.