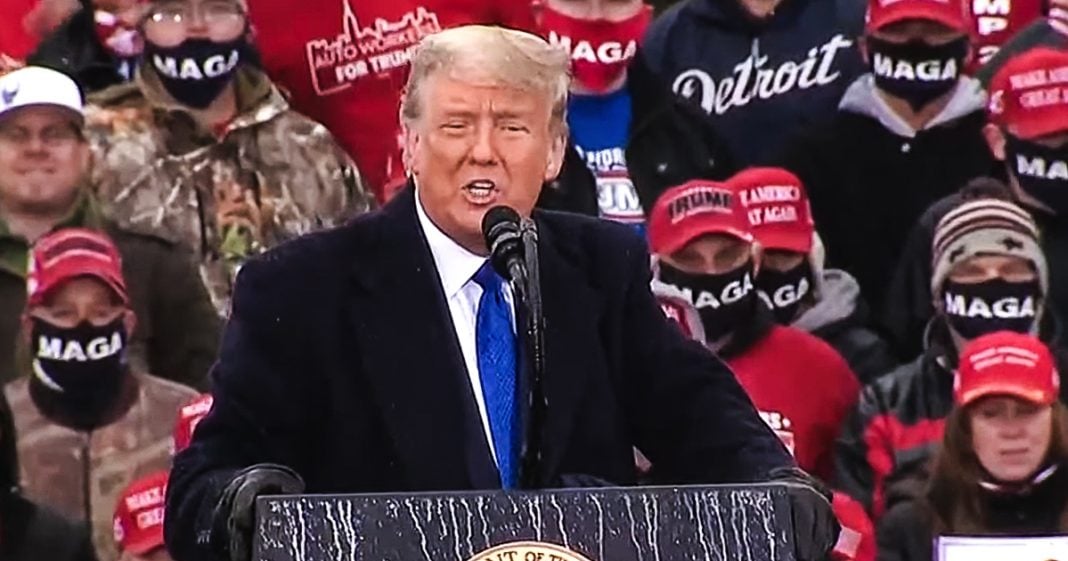 During a rally this week in Lansing, Michigan, Donald Trump whined about the fact that he isn’t allowed to sell weapons to dictators who have become his friends over the years. He then proceeded to ask the audience if this was fair. The truth is that the US would love to sell weapons to these characters, Trump is just the only one willing to say it out loud. Ring of Fire’s Farron Cousins discusses this.

At a recent rally in Lansing, Michigan, Donald Trump, whined about the fact that he’s not allowed to sell U S military weapons, two dictators. Now this came up because he got on a tangent during the rally about the fact that he’s become friends with dictators, you know, people like Kim Jong hang on and Vladimir Putin, he’s seated. He’s good buddies with all of them now. And he wants to sell them our weaponry because it’s just so awesome and cool. But Darnay, can’t, here’s what the president said. Uh, and this is word for word. So bear with me a lot of times. Cause you know, I’ve become friendly with many of the presidents and prime ministers, Kings and Queens dictators. I must tell you dictators. Uh, but I’ve become friendly with a lot of them. They say two things. It’s incredible what you’ve done with the economy.

They always say that I’m going to go on in just a second, but I’m going to go ahead and just say something here nobody’s ever told him that nobody there isn’t a single leader anywhere in the world past present, or future ever walk up to Donald Trump and say, what you’ve done to the economy is amazing. Donald Trump has done nothing to the economy, nothing except of course, you know, lead a bunch of, uh, farmers into bankruptcy, trade war. Other than that, he didn’t knew anything. Can we, can we stop acting like Trump is doing anything with the economy? And what’s even crazier is that polls actually show a majority of voters think he would handle the economy better than, than Joe Biden. Honestly, I don’t trust either of the guys on the economy, continuing back to the weapons for dictators part. They always say it, no matter what they say, we’ve done the most incredible job and they always start off by congratulating me.

No they don’t. The next question is that they want to buy our military equipment because we make the best equipment anywhere in the world. And sadly, with many of these nations who are not that friendly, we have to say no, does that make sense? So he ends it by saying like, look, they’re not friendly to us, but how does it make sense that I can’t sell them weapons? What are we living in crazy upside town? No, that’s a bad policy. Trump thinks I have no doubt. I thought that Donald Trump has discussed the possibility of selling weapons to people like Putin or Kim Jong-un. I have no doubt that he has discussed that with them and that they have expressed interest in doing that. I also have no doubt that Trump’s not the only person sitting in DC that wants to sell these weapons to these people.

I guarantee you there’s plenty on the Republican side and plenty on the democratic side, who if given the opportunity opportunity to legally do so would absolutely sell weapons too. Our enemies. And how do I know that? Because they’re already doing it, they’re doing it, they’re doing it right now. They have approved massive arms sales to Saudi Arabia. And if you think Saudi Arabia is our friend, then you haven’t been paying attention to geo politics over the last 50 years. Folks, Saudi Arabia is not our ally. Oh, we treat them like they are. We claim that they are. But at the end of the day, Saudi Arabia is turned around selling some of the weapons that were selling them to terrorists. And then those terrorists are using our own weapons to kill. That is a fact.

So yeah, it doesn’t surprise me. Some of our other enemies are out there saying like, Hey, what the hell? Like they’re using your own weapons to kill you. Like they’re getting money for it. And then those weapons are killing your guys. You know, we’re probably not going to kill your guys with them. So why can’t you sell to us? You know what, when you put it in that perspective, it doesn’t really make a lot of sense that we just pick and choose who gets to have our weapons to kill us with. Right. The whole thing is crazy. And the whole thing is an extension of the military industrial complex that unfortunately at this point has overtaken the entirety of our federal government.