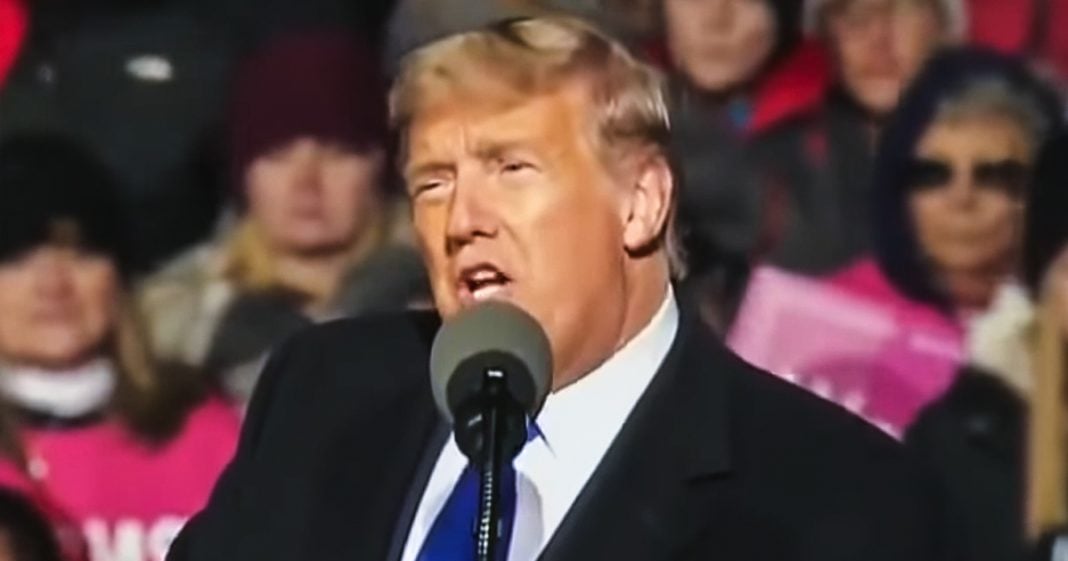 According to a new analysis from The Washington Post, Donald Trump (and the Republican Party) have funneled nearly $8 million into Trump-owned properties over the past 4 years, most of which came from U.S. tax payers. This negates all of the “salary donations” that Trump made over the years, as he was making boatloads of money off the backs of taxpayers. Ring of Fire’s Farron Cousins discusses this.

According to a massive new report from the Washington post out this week, the Trump administration has spent close to $6 million of our tax dollars at Trump owned properties over the last four years. So since Donald Trump has become president nearly $6 million of the money that we pay in, in our taxes has gone right back into the Trump organization, which weasels its way through that organization and all the way back into Donald Trump’s pocket. But I know Republicans love to tell us that, Hey Donald, Trump’s such a good guy. He’s he’s donating his salary. Nobody else would do that a hundred thousand dollars every three months, checkmate libs. And then meanwhile, the same idiotic right-wing talkers making these points that only a stupid person would make or helping this grifter pocket more of our tax dollars far more, by the way than he would have ever pulled in through a presidential salary.

That’s what’s crazy about this. You know, these people are so easily conned into the grand gesture. You know, the there’s the magician would say, you know, the, the flair, the waving of the wand, which has just to distract you while they do the other thing over here. And they’re watching the waving wand, not realizing that he’s picking their pocket at the same time, that is truly an art. And Donald Trump has mastered that he is a con man, this is what he does, except he’s picking the pockets of every single person in this country. Who’s pays taxes, which means the top 1%. They’re not getting their pocket picked Bezos. Isn’t getting his pocket picky, Elon Musk. He’s not getting his pocket picked the rest of us though. The working class, we’re getting our pockets picked and it’s going right back into the pockets of an alleged billionaire.

And I don’t know about you, but to me, that sounds like the kind of thing we should probably be pissed off about, but fear, not folks. That’s not just our tax dollars that are going into Donald Trump’s pockets. It’s also the donations from Republicans who are sending money to the RNC, which I guess does include some members of the top 1%, because in that same time span, uh, the four years he’s been president, you also have 2 million that has come from the Republican party itself into Trump owned properties. So there’s another 2 million that he’s pocketing. And then of course you have the little Republican organizations who will rent a room there, you know, to, to hold a party, to be like, Hey, look, we’re partying. And your, your hotel, mr. President, we love you. Uh, you had attorney general William Barr who spent $30,000. I think of his own money, uh, to host a Christmas party last year, all these people going to Trump owned properties.

Oh, and by the way, one of the things taxpayers had to pay for a $3 glass of water for Donald Trump. They literally at a club, he owns Mar-a-Lago and he said, can I have a water? Which is free wherever you go. Even if you go to a fancy place, you get a cup of water. It’s free. Mar-a-Lago the place Trump owns charged him $3 for a cup of water, which then was reimbursed by us taxpayers. We pay $3 for a bottle of water or a glass of water, not even a bottle of water. This is crazy. And the reason it’s crazy is because this man was not forced to divest. I don’t care who takes the white house next. I don’t care who takes the house or Senate. All I want is for there to be a law that a president must get rid of, not, not placing a blind trust, get rid of any.

And all vestments are money-making opportunities that they have plain and simple presidential pay presents for salaries, $400,000 a year. That is more than enough to support them that they have to get rid of it. They cannot make a profit off of anything that they owned. When they come into office, it all goes away a hundred percent, because until we do that, we’re leaving the door open to more Grifters like Donald Trump to come back in, do the big grand gesture of I’m donating my salary, but I’m on. So pick in your pockets, let’s put an end to that robbery, but we won’t be able to do that while Trump is still in office.