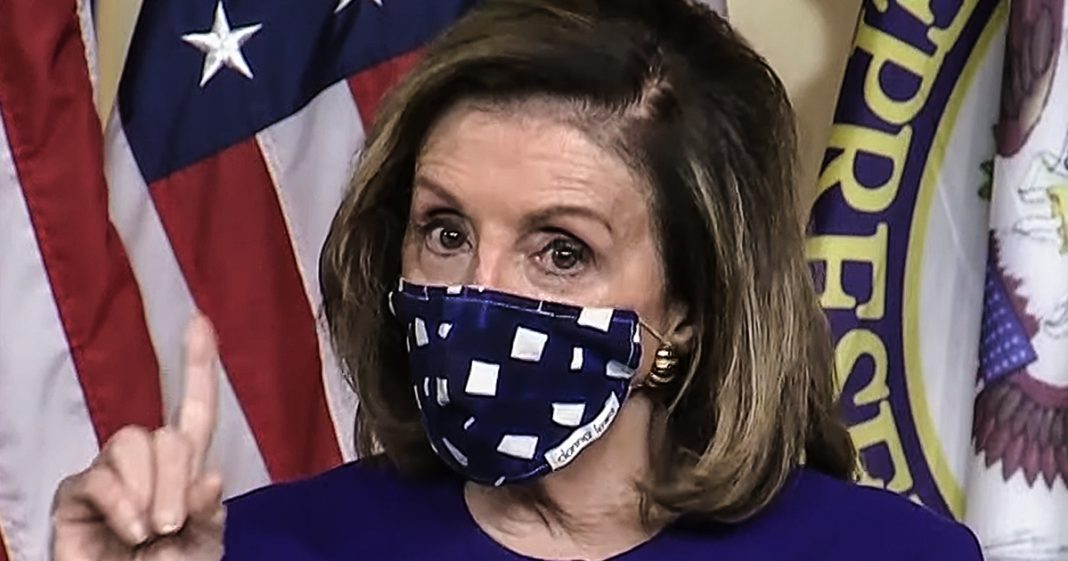 House Speaker Nancy Pelosi says that she will once again be seeking the speakership if Democrats maintain control of the House of Representatives. Given the fact that there hasn’t been a single poll showing Democrats losing control, this means that Pelosi is about to be the Speaker for at least another 2 years. And that’s not a good thing, as Ring of Fire’s Farron Cousins explains.

But, Oh, well, two more years of ineffective, 80 year old Nancy Pelosi, We have talked plenty of times about Joe Biden’s, mental health, Donald Trump’s mental health, uh, in this past week, Mitch McConnell’s health. Um, and we’ve briefly hit on Nancy Pelosi’s health, her mental health and all that. But, uh, I do think at 80 years old, it’s time to pack it in 80 Years old worth millions of dollars. You’ve been speaker of the house on two different occasions with that, a Republican control of the house in between there, you have proven ineffective. During the Trump years, you have given him funding for his border wall. You have approved his budgets with these absolutely astronomical $740 billion a year for the military, the cuts to social programs. Whoa, you’ve mocked. The green new deal. You’ve said no to Medicare for all. So why, why could you tell us why we would want you as speaker of the house? Still? Can anybody leave a comment, please? For the love of God? Can anybody tell me why we should have Nancy Pelosi as the speaker of the house for another two years?

Why that makes zero sense to me? She has had her time. Absolutely Democrats have not done very well under her. She is not a good leader. He has not stood up for the fights that she should have stood up to. She stood up for the symbolic ones, Oh, clap a ribbon on the paper, who that did nothing. First off, Republican. Sure. You triggered them who, and if that’s all you’re good for, then get the hell out of politics because that’s not what this is about. Nancy, your constituents are dying. Your constituents are living on the street, just like countless other people coast to coast. We need a speaker that actually represents and understands what these people are going through. And this is not just because of her age. This is not in any way because of the fact that she is a woman. There are plenty of women in that house of representatives. That would be phenomenal. Speakers of the house, any member of the squad, AOC, Tlaib, Pressley, Omar, Jayapal, Ted Lou would be wonderful. Ro Khana would be great.

There’s plenty of people out there. Unfortunately, most of these folks haven’t been in there long enough. So it would have to be some kind of tenured Democrat because it doesn’t actually have to be, but that’s what they would do because you know, you gotta work your way up the ranks. You gotta pay your dues. So if it’s not Nancy Pelosi would probably be some other octogenarian who has lost connection with the common people in this country who has lost connection with their own district and is only seeking to have a little bit more power before they finally kick off. We need a speaker of the house. That’s still going to be alive. In 30 years, we need a speaker of the house. That’s going to live long enough to see the consequences of their votes. That’s what we need. That’s what I want. That’s what I think we should have for every level of government. If you’re not going to be around in 20 to 30 years, to see the ramifications of what you put in motion, you don’t get to run it anymore.

We have age limits. Like if you’re too young, you can’t run for these offices. Why can we not have it the other way too? At 80 years old, Nancy Pelosi thinks she’s strong enough to be the strongest Democrat in the country. Second, only to maybe a president Biden, Mitch McConnell, 78 seeking another six year term in the Senate. And he won’t even tell us why he’s turning purple. Cool. I feel like I’m losing my mind these people are not in it because they want to help people. Bernie Sanders, just as old as these folks, he’s still out there trying to help people. So it’s not an age thing. It’s a power thing. That’s what this is. There are plenty of people who would do a better job than Nancy Pelosi, but at least for him two years, we won’t get to know that.