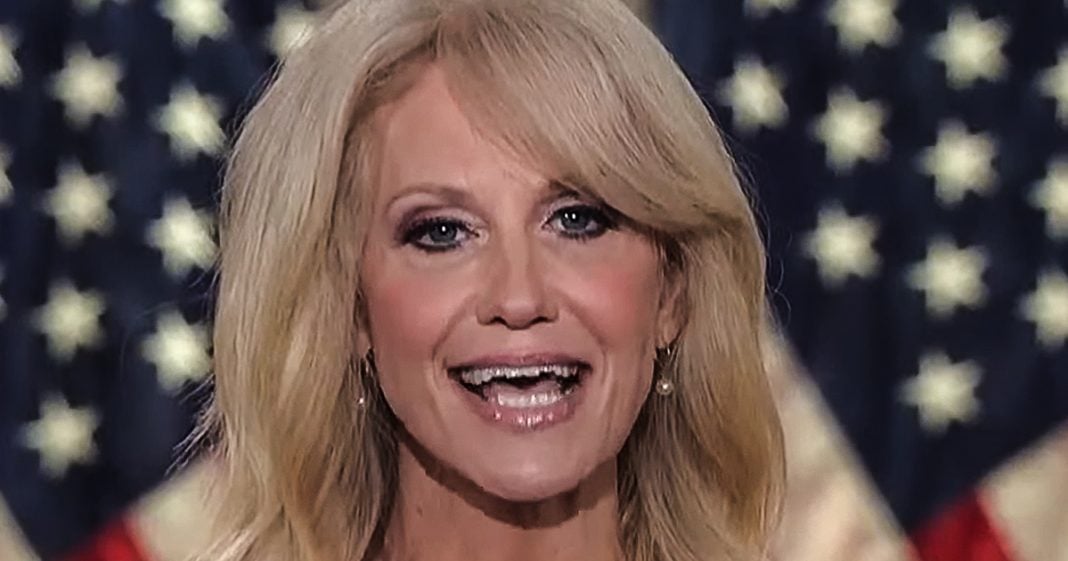 The GOP is paying Kellyanne Conway $15,000 per month, and no one knows why. To make matters more complicated, Conway isn’t the only former Trump official receiving this “stipend” by the Party without doing anything to actually earn it. This is confusing and bizarre, and might indicate that the GOP is trying to appease former staffers in order to prevent them from speaking out. Ring of Fire’s Farron Cousins explains what’s happening.

Kellyanne Conway has now been gone from the Trump administration for about two months, but they’ll feel bad for Kelly Kellyanne. She’s doing just fine. Kellyanne Conway has landed a sweet new gig with the Republican party paying her $15,000 per month, which is actually how much she was making while working for Donald Trump and her new job entails doing well. We don’t know exactly what she’s doing. All we know is that according to filings from the Republican party, ever since she left Trump, they’ve just been sending her $15,000 per month. And as best we can all tell she’s not doing any work for them. They’re just giving her $15,000 a month and social media outlets that actually still have a couple investigative journalists working for them, decided to look into this a little bit more and you know, what they found, they found that Kellyanne Conway is not the only former member of the Trump administration who is now being paid $15,000 month by the RNC. That’s kind of nuts. Uh, they also found that, uh, Keith Schiller, former Trump bodyguard is also being paid $15,000 a month by the Republican party.

They found that Rick Grinnell, who was a former member of the Trump administration, uh, is also being paid $15,000 a month. And he just got another check for 22,000 in October. And they don’t know what that was for. Uh, Amarosa was reportedly offered the $15,000 a month from the RNC, but, but she declined. Uh, Brad Parscale is also getting $15,000 a month from the RNC folks. What is going on? I think we all know what’s going on. I think it’s pretty obvious what’s happening here because none of these individuals that anybody can tell is actually doing work for the RNC and that $15,000 a month, a body guard versus a white house counselor like Kellyanne Conway. Do you think, and I don’t mean to demean anybody here, but to both be getting $15,000, that almost seems like it’s just the stock amount for every single individual, regardless of experience, regardless of area of expertise, getting that same amount, that sounds like hush money payments. To me, that is 100%. What I believe is happening here. Omarosa didn’t take the money, right? Why? Because she wrote a tell all book. That’s why that’s what this is. This is a pretty big scandal folks Really, truly is. The Republican party is using their money to put these people on as staffers, even though they’re not really staffers because they’re not doing anything just so they can pay them $15,000 per month. To shut up to not say what happened while they were working for this Republican press. That’s a pretty sweet gig. Hello.

If I’d have known that’s what the RNC was offering. I would have taken that deal for about six months, maybe paid off my house, my student loans, all my medical debt, that would have been great. And then, you know, go back to mocking Republicans and Trump, but either way, this is nuts. How is this not a massive story? Like Republicans still tried to push the Hunter Biden thing. Like, Oh my God, he made money. And he shouldn’t have, and Oh, he did drugs and he shouldn’t have, okay. Your party apparatus is literally paying hush money, 15 grand a month to four or five different people because they don’t want them to tell the truth about what’s going on with this administration. I think that’s a bigger story. And I think that’s a story that should blow up. And I think it’s a story that probably warrants a congressional investigation to say the least possibly even a federal investigation. I may not know everything about campaign finance laws, but I do. You know that paying hush money, paying people money for work, that’s not performed. Yeah. You got some frauds in there. Maybe worth a law enforcement agency to just kinda peek around and see what’s really happening.