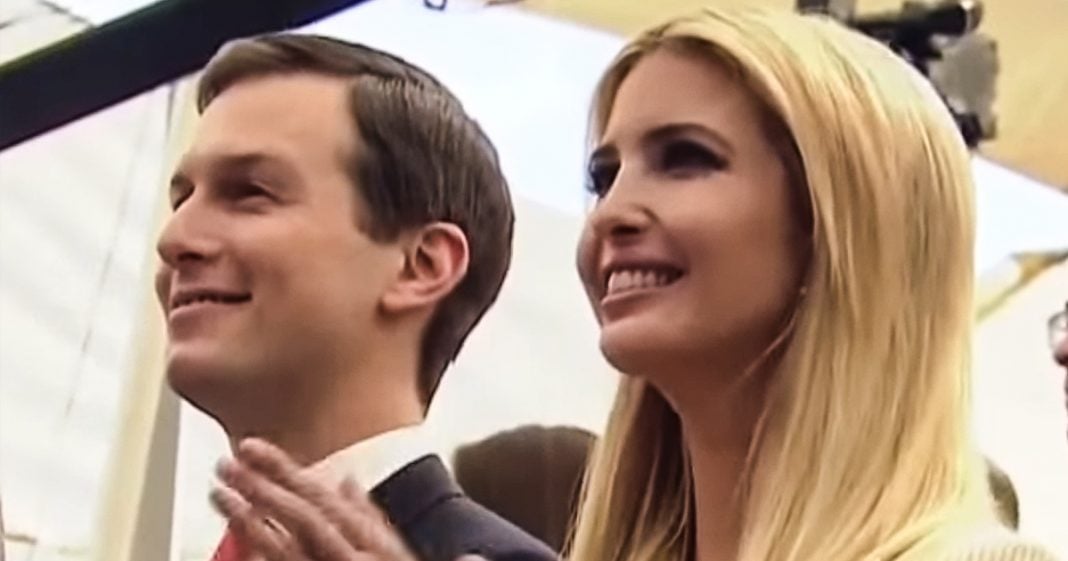 Ivanka Trump and Jared Kushner are FURIOUS over the fact that the Lincoln Project paid for a large billboard with their images on it along with quotes and statistics about the pandemic. The billboard is meant to show New Yorkers the kind of horrible monsters Jared and Ivanka are, but it isn’t about swaying voters – it is about shaming these two to make it harder for them to return to the life that they love so much. Ring of Fire’s Farron Cousins explains what’s really happening here.

Last week, the Lincoln project put up a big billboard in times square. Uh, one side of it, cause it kind of wrapped around the building one side, featured Ivanka, doing her little pose like she had with the beans. Uh, but instead of holding Goya beans, she is holding the death toll for the Corona virus around the other corner is a Jared Kushner, um, saying his, uh, comment, uh, new Yorkers are going to suffer and that’s their problem. Uh, that quote actually came from a, uh, uh, newspaper, uh, vanity fair site in an unnamed source saying that that is what Kushner said to New York, governor Cuomo about new Yorkers. And after this billboard went up almost immediately after this billboard went up, uh, lawyers for Ivanka and Jared threatened to Sue the Lincoln the project. Now here’s the thing they have. I have no chance of winning this cause their lawyer’s already said one.

Uh, Kushner never said that. Well, actually that have, they have documentation, uh, which could be unveiled if needed, be, uh, in court that he did say this second, they said, Ivanka never made that gesture. Huh? Now we’ve all seen the picture of her with the Goya beans. That’s where it’s from. They just photo-shopped out the beans. So the lawyers were already lying and that’s how desperate they are. So they have no case. Second reason they have no case is because it’s damn near impossible for a politician or public official. Cause they’re not elected, uh, to win a defamation case because he bar to cross or to, I guess, uh, uh, go over for a defamation case for a public official is damn near impossible. And you can actually think the New York times for that the Supreme court case that they brought many, many years ago essentially, is what allows, uh, politicians in a way with saying anything about their opponents to allow media outlets, to say whatever they wanted about politicians.

Uh, it’s actually one of the reasons we have such horrible political ads in this country where you can just straight up lie about your opponent without being sued for slander or libel. It’s because of that New York times Supreme court case. So thank them for that Jared and Ivanka because you won’t win this court case. Now here’s the thing. A lot of people on Twitter pointed out the fact that yeah, great job Lincoln project. This is in New York, it’s a blue state. Why are you doing this? You’re not going to, it’s not going to get them more electoral votes because everybody else missed the point. And I understand exactly why the Lincoln project did it. And I like it. See, there have been plenty of reports. Most of them within the last year about Jared and Ivanka being closed out of their former circles in New York city, all the rich wealthy well-to-do friends want nothing to do with them.

And considering the fact that it is very likely according to the polls, that they’re going to be headed back to that private life at, uh, the end of January next year. They’re not going to have anybody to turn to. They’re not going to have any friends. Nobody is going to be around. Nobody’s going to want to associate with them because of their toxicity. And that is why the Lincoln project ran this ad. This billboard was not directed at undecided voters. This billboard was to remind the wealthy elite of New York city of the toxicity of Ivanka Trump and Jared Kushner to remind them that when they come back to New York, this is who they are. This is what they think of you. And these are kinds of people that you probably shouldn’t be associating with because I can imagine that’s not going to be good for business. That was the purpose of this ad. And to be honest, this is a bit more psychological warfare than I thought we would see in this campaign, but it’s good. And I like it and good luck to Jared and Ivanka trying to Sue to get them to stop because that ain’t going to happen. And again, go ahead and thank the New York times for that.