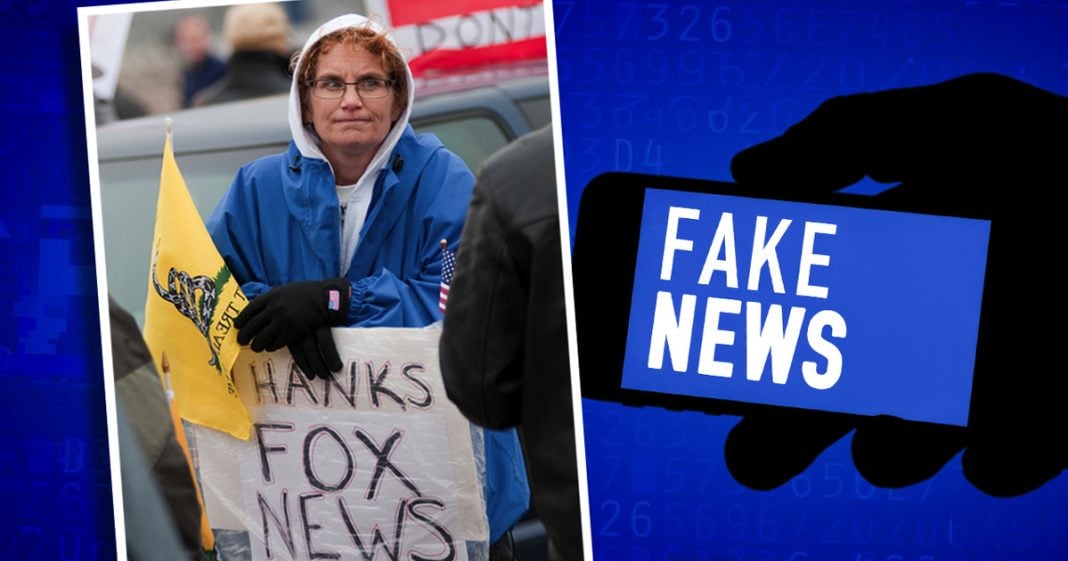 According to a new report, Baby Boomers are far more likely than any other group to not only ingest fake news and misinformation, but they are also more likely to share it with others. This dangerous feedback loop between Fox News and Facebook among this age group has poisoned the well of political discourse, and has done irreparable damage to an entire generation. Ring of Fire’s Farron Cousins discusses this.

This past week Huffington post actually published a phenomenal new report, analyzing why baby boomers are such big spreaders of misinformation here in the United States. And here’s, I’m trying to boil down a massive report into just a few minutes. So bear with me here. Here is the whole report in a nutshell, um, as we know this age group is statistically far more likely, likely to be viewers of Fox news. And in the past few, few years, obviously this group has also migrated more online. You know, these are people who were, you know, middle-aged folks when the internet came about when computers became very common and we use them for work all the time. So they have, uh, effectively spent the last 30, 40 years of their lives with computers. So they know them more than say, you know, our grandparents would have, and they use them frequently.

They’re on social media. They have essentially taken over Facebook and that’s where the feedback loop comes in because so many of these folks are on Facebook. And because Facebook has such a horrible fact checker, these baby boomers, as the report points out are far more likely by huge numbers than any other demographic to share fake news and misinformation. And this fake news and misinformation gets regurgitated back to them from Fox news or from any of the other, uh, right-wing websites that they frequent and the cycle just repeats itself. So baby boomers are helping to poison the well of political discourse here in the country. And one of the, they talk about, and I do, this is the one I want to hit on is because as we age, and again, this has mentioned in the report, this is basic science here. I’m not meaning this to demean anybody.

As we get older, typically around the age of 45, our mental faculties start to get not quite as sharp. That’s just science. That’s just brain cognitive decline. I guess you’d call it, but it’s not even necessarily a noticeable decline. It’s just a little slower to process. It’s like working on an old computer. If you’ve got the time, that thing will work for you, but obviously it’s not going to be as fast as one you just took out of the box yesterday. That’s what we’re dealing with. The, the slower computers. They also may not necessarily have the means to go out there and fact check for themselves. They also a lot of them, and this is a scary part to, uh, have this false belief that if it weren’t true, it wouldn’t be allowed here. So they’re a little bit naive. They’re a little bit, you know, slower.

Some of them not even all of them, it doesn’t happen. All the people with the cognitive, you know, slow down. But all of this combined creates a very real problem for, you know, America. We have so many websites out there and some of them are being run by foreign countries with these little troll farms, cranking out all of these articles that are pure fantasy, but yeah, they get shared online. Then we have, of course the ones here in the United States pumping out pure right wing propaganda that has no basis in reality. You know, they skirt the line wine of libel every day. They, they, they lie just enough to probably not get sued, but if they went like one more lie over, you could easily Sue. And I I’m surprised. And of course, by the way, most of what they write is about politicians and that isn’t even higher bar for slander and libel to Sue for.

But, uh, you know, the, the daily wire daily Carl or your Breitbart’s, these are not reputable or trustworthy news outlets at all. And sure there are some on the left too, that are just like it. And the best way you can tell is if you, you have an outlet that refuses to go after one side, probably not the kind of outlet you should trust. And I know that we spend a lot of our time here talking about Republicans, but you can go back through and you see that we were also not shy whatsoever about calling out any and every Democrat that needs to be called out, reporting on corruption on the left, Israel as the right. Are we biased? Hell yeah, we’re biased. So as everybody else, but we’re also honest and that’s where we need in media. That’s what we need in this. You know, citizens media really unfair, definitely there’s too many bad faith actors. Everybody has access to this. Anybody can do this, which should be a good thing. It should increase the spread of information, but all it’s done is helped to dumb down the public by increasing the spread of misinformation. And unfortunately the over 60, over 65 crowd, they’re the ones most likely to fall for it. And the ones most likely to keep it alive on social media.