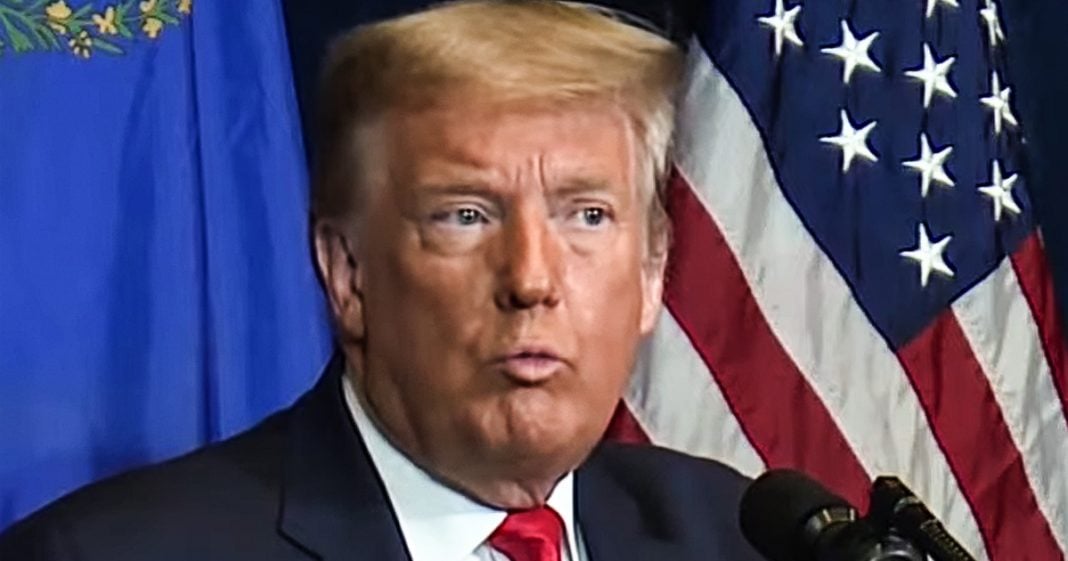 During a press conference this week, Donald Trump said that he “hopes” that the courts will go ahead and stop all states from counting ballots after November 3rd, a claim that shows he is wanting the courts to influence the election. The joke may be on him at this point though, as early voting numbers are benefiting Biden, and Trump may end up wanting to extend the count once the voting starts on Tuesday. Ring of Fires’ Farron Cousins discusses this.

During a press conference in Las Vegas this week, Donald Trump actually admitted that he is hoping that the court system interferes with the 2020 election in order to help him win. Here’s what the president said. He said, quote, hopefully the few States remaining that want to take a lot of time after November 3rd to count ballots, that won’t be allowed by the various courts. Now he has repeatedly said, uh, this week, especially that no ballots should be counted after November 3rd, we have had a Supreme court ruling this week that, uh, told specific States you can’t count ballots after November 3rd. Uh, that’s horrifying because even in elections that aren’t contested. When you have a clear winner on election night ballots still end up getting counted. After election day, you have mail-in ballots overseas ballots ballots from American troops. Who’ve been stationed in the middle East for God knows how long fighting a war for God knows what reasons they get to vote to.

And their ballots tend to take a little bit longer, especially since you sabotage the male, but he doesn’t want that to happen November 3rd, if it’s in it’s in, if not, not happening. And he better be careful for what he wishes for. Here’s the thing. Folks, if Joe Biden gets a decisive victory on election night, which I know a lot of people are saying probably isn’t going to happen. I tend to disagree. I, I think we’re going to have a clear winner on election night. I could be wrong maybe, but it’s not very frequent that we don’t have a clear winner on election night. And given the polls, given the early voting numbers, we’re going to have a clear winner. I’m pretty sure all do a video talking about how wrong I am if I’m wrong, but I don’t think I’m going to be wrong. We won’t know till it happens, right?

Nevertheless, Joe Biden, let’s assume he pulls out a great victory on election night. It’s clear that he won suddenly Donald, Trump’s going to be saying, Ooh, wait, wait. There’s still ballots that have to be counted. You can’t do this. You can’t do this. And what will have happened at that point? His court system by his own request will have said, well, dude, you told me not to count them after November 3rd, what are we going to do? Now? We are, we already issued the ruling. We have thrown away. Maybe it would have given you the white house. And then he’s just going to say, well, you know, it would have a totally would have won or they didn’t count all the ballot. So it’s not a legitimate election. It’s not a legitimate election. Cause he didn’t count the ballots because I told him to. But there’s no good outcome here.

There’s no good outcome for the American democratic system. There’s no good outcome for the candidates. There is no good outcome for the future of this country. When one candidate who also happens to be the president is out there saying, don’t count them. Don’t keep this thing going. If you don’t get it in, it doesn’t get in. If there’s any kind of hitch, you know, with any precinct, any County, any state. Oh well, because that’s the real issue. Not that we have as huge influx of ballots still to be received or to be counted it’s that there are glitches, there are glitches. And Trump thinks he’s going to end up with a Bush V Gore situation from back in 2000 where they had to go back and recount the ballots because of all the hanging CHADS people didn’t push the thing out, uh, all the way. It’s not going to be like that. I’m fairly certain. It’s not going to be like that. And if Biden gets a decisive victory, watch how fast he changes his tune and starts begging the courts to keep counting ballots past Tuesday.