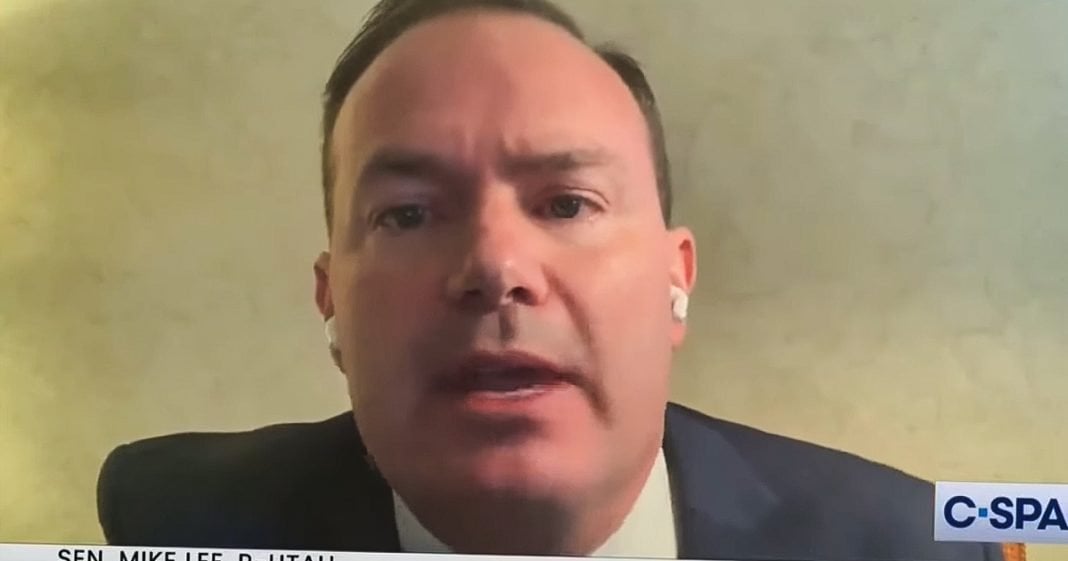 Republican Senator Mike Less is furious that social media companies would dare to fact-check what he posts, which he believes to be a form of censorship. These Republican snowflakes have gone off the rails over their claims of “censorship” in recent years, thinking that they should be allowed to post whatever lies they want without any repercussions. Ring of Fire’s Farron Cousins discusses this.

The Republican snowflakes in the us Senate, Ron full display this week during hearings with the tech CEOs about alleged censorship taking place on those platforms. And we learned a little bit this week about what Republicans think censorship actually means because according to Republican Senator Mike Lee censorship also means fact checking. So if you fact check something on social media, they put up a warning saying, Hey, literally nothing in existence supports this. According to Republican Senator Mike Lee, that censorship, you can’t do that. You can’t tell people we’re lying to them because that’s the same as telling us we’re not allowed to speak. Uh, here’s what Mike Lee said on the floor of the us Senate. And during a Senate hearing some of these people were remote. I didn’t, I don’t know if Lee was remote or not, but anyway, here it is in the Senate record. When I use the word sensor here, I’m meaning blocked content fact check or labeled content, or D monetized websites of conservative Republican, or pro-life individuals or groups or companies, you know, forget for a fact that it was literally revealed last week in a wall street journal report, not exactly a liberal rag, a wall street journal report confirmed that Mark Zuckerberg of Facebook actually approved an algorithm that he knew would promote conservatives and punish liberal, uh, websites.

Liberal content would suppress that while promoting conservatives, the entire premise of this crap that Republicans are dragging these tech CEOs in front of the Senate for the entire premises is, is . It’s all . None of it is true. And there is evidence and documentation to prove that everything these Republicans are saying is false. Now do the tech, the CEO’s does the tech industry need to appear before the Senate? Uh, for some of the things they’ve done, how yet? Oh, hell yeah. Like that’s not even a question. They all need to be broken up. They’re all running these monopolies to pro promote their own products over others. Just like Google is being sued for now by the DOJ. The rest of them are guilty as hell to bring them in and talk about that. Bring them in and talk about real issues. But what’s really happening is that these snowflake little Republicans who are taking tech money, by the way, most of it’s going to Democrats right now, but there’s still plenty to spread around, including two Republican Senator, Ted Cruz, who’s taken tens of thousands.

And yet he’s one of the biggest whiny babies of a mall all week. Oh Sandra, Oh man. I went myself well, good for you, Senator Cruz. It’s a lie. Nothing you’ve said is true. And it’s pretty easy to prove you’re wrong, but it is what it is, you know? And I can’t help, but think how great would things be in this country if the hatred in vitriol with which Republicans went after the tech industry for not actually censoring conservative views. Imagine if they put that same energy towards holding pharmaceutical companies accountable for jacking up the price of your medication by 20000% or what if they directed that anger at insurance companies who are denying valid claims, just because they can and nobody’s going to hold them accountable. What if they directed it at fossil fuel companies who continue to destroy our environment, lie about climate change, lied to their shareholders about climate change and reap all the financial benefits. If they did even just one of those things, those Republicans, this country would be a better place, but instead they’d rather waste their time and injury in energy, on little made up scandals so that they can make their little snowflakey Republican base feel like they’re doing something, even though there’s nothing to be done, because what they’re claiming is happening, isn’t actually happening.