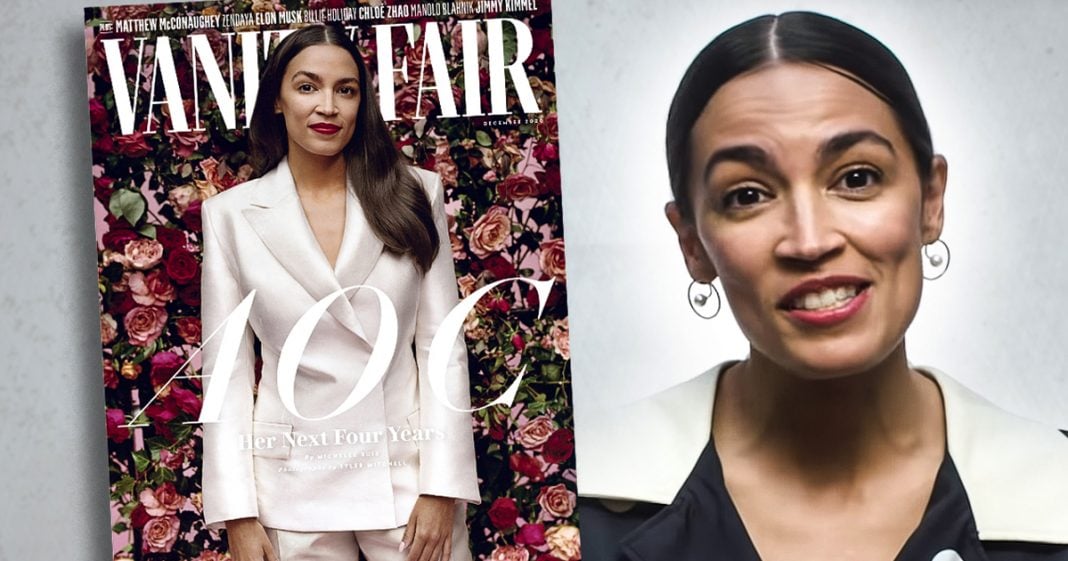 Representative Alexandria Ocasio-Cortez recently appeared on the cover of Vanity Fair, and it has made conservative heads explode. They are furious over the fact that she was wearing an outfit estimated to cost about $14,000 without ever once stopping to think that it wasn’t her outfit because it was a photoshoot. AOC quickly fired back at these angry conservatives who have criticized her for everything from her former career to the cost of her haircuts. Ring of Fire’s Farron Cousins discusses this.

Well folks, representative Alexandria Ocasio Cortez appeared on the cover of vanity fair this week. So obviously conservatives had to flip the hell out and they did it. Didn’t take them long at all because apparently the outfit she was wearing on the cover and, you know, in the inside the, the photos, there was a $14,000 outfit, including, you know, the clothes, the shoes they take. They may have been a handbag in there too. I don’t know. Uh, but all of that $14,000. So conservatives did their collective ha you, you, you democratic socialist, you are wearing expensive clothing. Therefore you are a fraud. The worst of the worst, right? Look at the hypocrisy of this woman wearing clothing that it turns out was that actually given to her by the, uh, people at vanity fair to wear during the photo shoot. It was not her clothing because that’s how photo shoots typically work for big organizations like this.

They have huge wardrobe departments to dress people to do all that. And that’s what this was that $14,000 outfit wasn’t hers and AOC as per usual, was able to point that out on Twitter, uh, didn’t lose her temper, at least not in a way that, you know, I probably would have, um, she did point out that this is stupid, that this is idiotic and that this kind of thing has to stop. And she’s a hundred percent, right. This woman has endured, you know, before I even say, you know, let me say this, you know how Donald Donald Trump is out there. Like almost every single day since he took office whining about how mean the press is to him and how everybody’s unfair to him and how everybody’s attacking him. And everybody’s out to get him. Yeah. First of all, not true with him, but it is true with AOC a hundred percent.

She, it absolutely has been dragged through the mud for the phoniest of phony scandals by conservative media outlets. And occasionally by real reputable papers, they’ve attacked her for spending less than $300 on a haircut that included a cut style and color. And I don’t know if you’ve ever had to pay for one of those, you know, maybe, uh, if you’re, if you’re a guy and you haven’t had that, your, your wife has, your girlfriend has significant other, whatever your mother, sisters, like, even I know like when my wife who only does it once, maybe twice a year, when she goes to the stylist, like that’s going to be a good three to $400. Cause that’s what it costs to do those kinds of things. And she got crap for spending under $300 on the same thing saying, ah, ha you rail against society. Yet you contribute in society.

It’s the, it’s the cartoon. It’s that cartoon to life with the way these people are with AOC, they have criticized the way she dresses, uh, claiming that you can’t be a democratic socialist and wear nice clothing. And then if she were to show up wearing a burlap sack to the, uh, house of representatives, they’d be like, Oh my God, you’re a disgrace. This is why you can’t elect bartenders. Oh, and of course they, they mock her for once holding a real job, being a bartender, being a server, does anybody who’s ever worked in the restaurant industry can tell you that is grueling. That is grueling, uh, uh, unappreciated work by the way, spent many, do we get myself hope to never go back there? And any time I do go out to eat, which obviously hasn’t happened during the pandemic, uh, or sit at a bar.

I overtip because those people get treated like garbage. They typically get paid like garbage and then deserve a lot better. And it’s a hell of a lot more work than a looks like on the surface. But nevertheless, she persisted. She always does. She is strong. She is not letting these attacks get to her or at least not letting them know that they get to her and they keep coming up empty handed. She is an idol. She is a role model. She’s an icon because she represents something so much more than just herself. She, he represents a new face of a movement, hopefully a new face of a democratic party. And if not a new face of a democratic socialist party. And that’s why she is so terrifying to these Republicans because she represents the future. She represents change. She represents something that stands for the American people and more and more people in this country are being drawn to that in a way from the Republicans. And that is why they freak out and try to attack her over every single little thing. Cause if they can’t stop her, they know that eventually she is going to destroy them. And I can’t wait for that to happen.