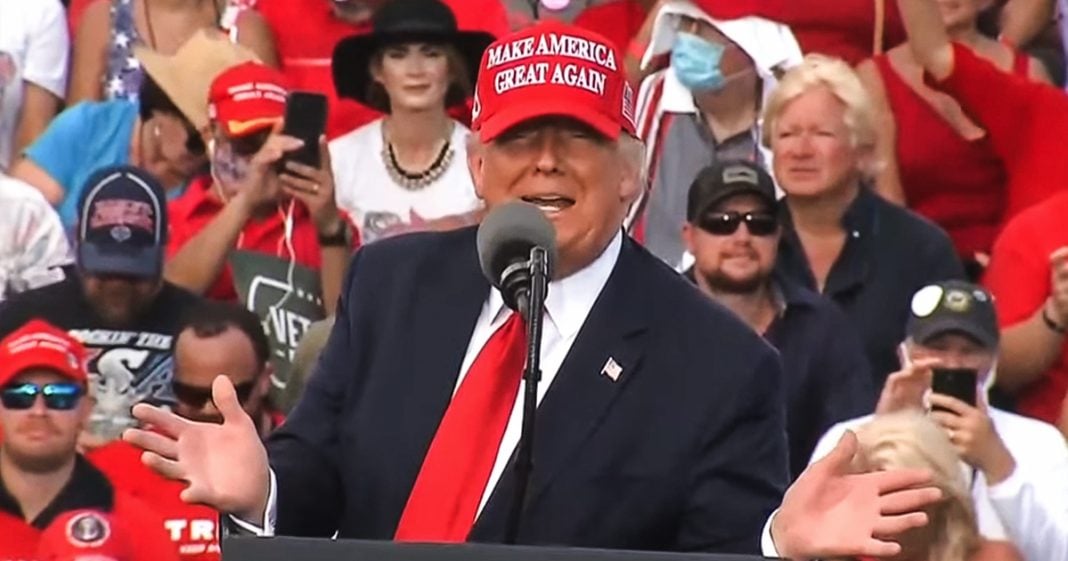 Much like his rally in Omaha earlier this week, Trump’s rally in Tampa resulted in people being taken away in ambulances to seek emergency medical attention. These people were being treated for heat-related ailments, including exhaustion and difficulty breathing due to the high heat and humidity in Florida. These rallies are death traps, and Ring of Fire’s Farron Cousins explains why it isn’t worth it.

Yet another one of Donald Trump’s rallies this week, in fact, yesterday actually ended up turning into a another death trap. However, unlike his a event earlier this week in Omaha, that left people with hypothermia, his rally yesterday, down in Tampa, left people with heat exhaustion to the point where roughly 17 of them had to go to the hospital to seek emergency medical treatment. In fact, the heat got so bad, the heat and humidity for those in attendance outside, they had to bring in a firetruck that then began spraying the firehose all over the attendees in an attempt to cool them down. Now you would think, right? I mean, logic would dictate that if you’re in a situation voluntarily, like you’re, you’re not being forced to be there. You’re not being held at gunpoint. You can leave at any point. If you’re in a situation where it gets so bad that the fire truck has to hose you down.

So you don’t get heat exhaustion, and you continue to stay. I mean, look, we love to say that Donald Trump is being irresponsible and he is, but at some point, these rally attendees are going to have to start taking responsibility as well, because this is just getting to the point of absurd. You know, it’s like intentionally running into the buzz saw, you know, it’s there, you know, it’s dangerous, you know, it’s a stupid idea, but you’re going to do it anyway because you kind of just want to see what the buzz is all about. Know folks, can you please stop? They can this be over? Which luckily, by the way, after Tuesday, this should be over, uh, regardless of the outcome on Tuesday. Because if you think Donald Trump is going to still go around and have these rallies and connect with you people, uh, after the election, your crazy he’s actually admitted in several of his rallies that I wouldn’t even be here talking to you. Numbskulls. If, if I was polling better geesh, I had to get off my and do something. So now I’m stuck here with you. People try not to die before the rally ends. This is crazy folks for real.

It is sad, obviously that these people had Donald Trump’s Tampa rally yesterday did have to go to the hospital. Uh, some of them who didn’t go to the hospital still did get emergency medical treatment there at the rally. Paramedics were brought in for these people. Heat exhaustion is nothing to mock or make fun of. It’s very serious. Uh, and the effects of that can last for a very long time. I’ve had it before it is God awful, but typically it is something that people survive, unless you are an exceptionally, you know, poor health, or if you’re very elderly. Some of the folks who did suffer heat exhaustion were in fact elderly. So hopefully they are okay, but again, this is being irresponsible. And at this point it’s also irresponsible for people to go to the rallies you have seen just in the last week, what happens at these rallies? They’re super spreader events. According to medical experts, you’re being literally left out in the cold to die. And if it’s not the hypothermia that gets ya, they’re going to make sure that the heat exhaustion get you down here in the South. Don’t go to these rallies. He doesn’t care about your life. You are expendable to him so long as you’ve already cast your vote for him. If you haven’t yet, he probably wants to keep you alive. But if you’ve already voted for him, he could not care less about whether you’re still alive on Tuesday.