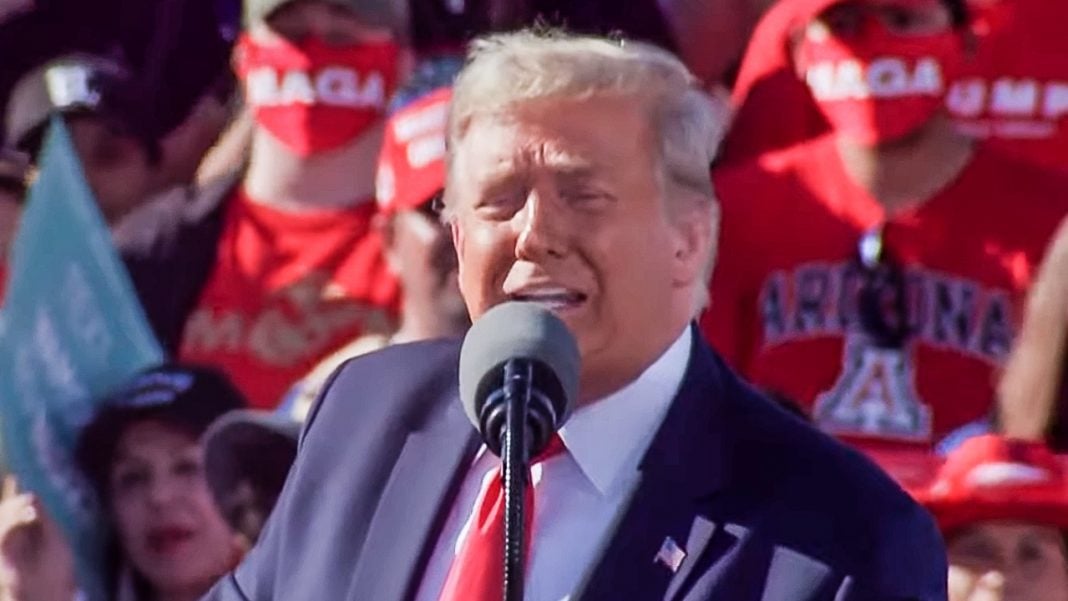 During a rally in Arizona on Wednesday, Donald Trump went a bit off script and started attacking Republicans. Specifically, he was attacking the so-called RINOs (Republicans In Name Only) even though this is really just a mythical creature. What he was really doing was sending a warning message to Republicans who aren’t going to vote for him this year, as Ring of Fire’s Farron Cousins explains.

So we’re not going to know we’re not going to know the end of that statement. We need to know why you said, do you know why we want to know, why can we please not have the jets flying over Trump while he’s saying stupid things? Because we want to hear the end of the stupid thing. Like, you know, it’s going to be something ridiculous, but you’ve sat through the rest of it. You kind of want to know it’s like a bad joke, but you got to get to the punchline just so you have that closure. And I am furious that this jet flew overhead. And now we don’t know what we should know. Here’s the thing, folks, Donald Trump, when he talks about Republicans in name only is not talking about members of the house or members of the Senate. A rhino is in fact, a mythical creature these days.

Oh, we see lots of him pretending to be rhinos, but really it’s just a Republican horse with a horn strapped on its head. And they take the horn off when they need to. It’s not an actual rhino and the people, I mean her Mitt Romney, Susan Collins, Lisa Murkowski, you know the ones who, Oh, they ring their hands and they say, I’m not happy with this movie. I’m gonna go ahead and vote for it. That’s what they do. Those aren’t actual rhinos. They’re pretending to be rhinos. The people Donald Trump was actually talking about where the never Trumpers the Republicans out here all throughout the country, who aren’t going to vote for Donald in this year’s election. He is trying to convince them and his supporters that if you know a Republican, maybe a Republican in this room and they’re not going to vote for me, that is the lowest form of human life.

That is the seed. He is planting with these people, you know, a little bit of psychological trickery here. You know, this is the con man at work. The con man is cornered. The con man is afraid. And so the con man is trying to get his supporters, his Republicans to turn against one another, almost turned them into the thought police, you know, are you, are you a Republican who doesn’t support Trump? Show me your papers. That’s what he’s doing here. That’s rather scary. Not for me because I’m not a Republican. It’s a little late in the game for this tactic to actually have a big impact on the election. But I guarantee you, there are Republicans who weren’t going to vote for him that heard that, that may take it personally and might end up switching their votes. There’s Republicans who heard that and have Republican friends who aren’t voting for Trump, and that could destroy those relationships. Trump knows exactly what he’s doing, and if he hadn’t got distracted by that jet, he probably would have gone even further trying to paint these never Trump Republicans as the worst form of life imaginable.