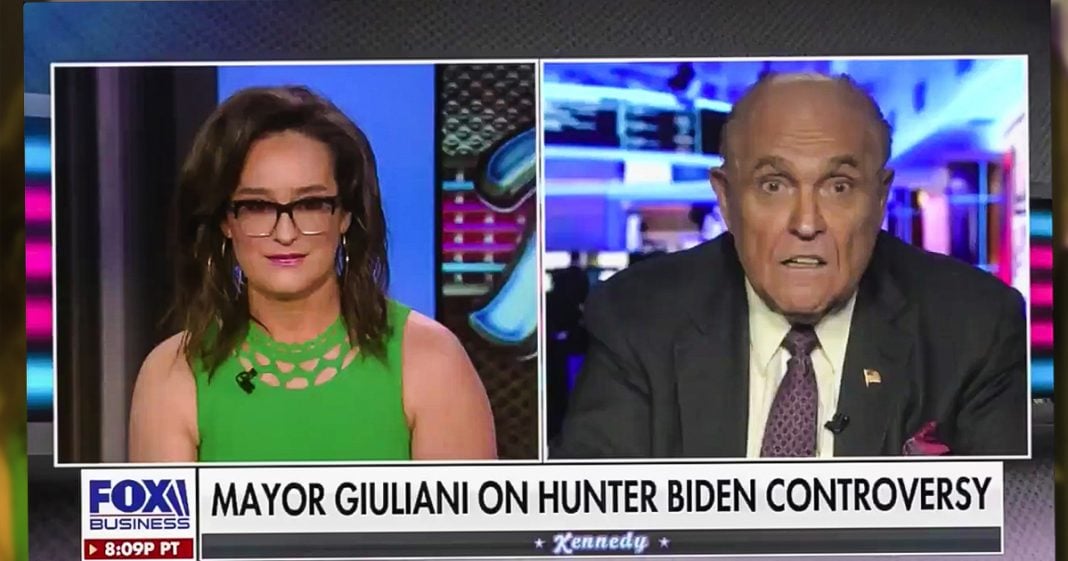 Rudy Giuliani went off the handle during a Fox Business interview this week. Fox host Kennedy warned Rudy that he MIGHT be pushing conspiracy theories and that they needed to be verified, and then compared him to Christopher Steele. That sent Rudy over the edge, and he lashed out angrily at the host and the world before declaring that he was done with the interview. Ring of Fire’s Farron Cousins discusses this.

Rudy Giuliani has been well, having a tough life, I guess you would say ever since he decided to link arms with Donald Trump and really just kind of become Trump’s henchman things. Haven’t gone well for Rudy. Uh, since he made that decision, he’s gone on national television countless times and embarrassed himself, embarrassed his client and well embarrassed. Anybody who ever voted for him when he was in New York, uh, this week, by the way, no exception yesterday, Rudy Giuliani, uh, went on the Fox business show Kennedy with the athlete named host Kennedy. And when she asked him or not even asked, she just mentioned that, Hey, all of this stuff, you’re peddling right now about Hunter Biden and all of that, you know, it needs to be verified. You know, she, she made it clear that, uh, we’re having some trouble making sure this is accurate. And Rudy flipped out like flipped out in a way that we have not seen Rudy Giuliani ever freak out on national TV. And it was beautiful. It was everything you could have hoped for. So without further ado here is Rudy Giuliani, freaking out on Kennedy on Fox business. Take a look.

Kennedy:              And that you were going back and forth between Ukraine and the United States.

Rudy Giuliani:                   Similar to an obstruction of justice. What you are saying is an outrageous defamation of me, of my reputation. Every single thing is here. And I want you to look at it.

I, I love that. Like calling somebody in the Republican circle, Christopher Steele is like the ultimate insult. You know, like there’s, there’s nothing worse to be called if you’re a Republican than Christopher Steele, who, by the way, a lot of the things in the dossier did end up getting confirmed. They weren’t able to confirm the pee tape and you know, some of the other more salacious points, but other things in there actually did get confirmed. Whereas you Rudy, your peddling, a non crime. Everybody realizes that. I know he’s, I’ve got under-age girls here. I’m sure you do Rudy. I’m sure we’ve all seen the borax. Uh, no, but for real, uh, there’s no evidence at all to suggest that Hunter Biden has been with underage girls. If there is lock him up, I am 100% in favor of that. I have no emotional ties to Hunter Biden.

I am not trying to protect Hunter Biden. I don’t care. Sorry. I don’t care. I really am. I truly don’t care. But see Rudy, that’s the thing. Nobody cares. Like I’m not unique in saying I don’t care about Hunter Biden. I am with the vast majority of people on both the left and right saying we don’t care. Hunter Biden is not running for president. And it’s very unlikely that, uh, Joe, who is going to give him a cabinet position, if he wins and as for the other like, Oh Joe, Biden’s getting percentages of this stuff. Oh, you mean percentages of the plans that they worked out together after Biden had left office, there’s literally nothing illegal about that. That’s actually fairly common in business now may not like it. You may think they got overpaid, which they did. You may think it’s unethical. Sure. But a crime.

No, it’s it’s 100% not for a retired politician to go into private business and make a lot of money. That’s a story that happens every day. It should. I wouldn’t, but it does. And there’s nothing illegal about it. The rest of the stuff that you were claiming, Rudy, uh, that’s easily going to get you slapped with a, uh, slander or libel lawsuit. Hunter Biden is not a politician. Hunter Biden has not in any way. Unlike the Trump kids injected himself into his father’s campaign, y’all did that. You’ve been doing that. You’ve been trying to do that for over a year with your contacts in the Ukraine. So that’s what that is your probably going to get. He gets sued and given your advanced age, that may be the last thing that Americans remember you for the crazy whack job who freaked out on Fox news and got himself hit with a libel lawsuit, all because you wanted to help your buddy Donald hope it’s worth it because this is your legacy now.