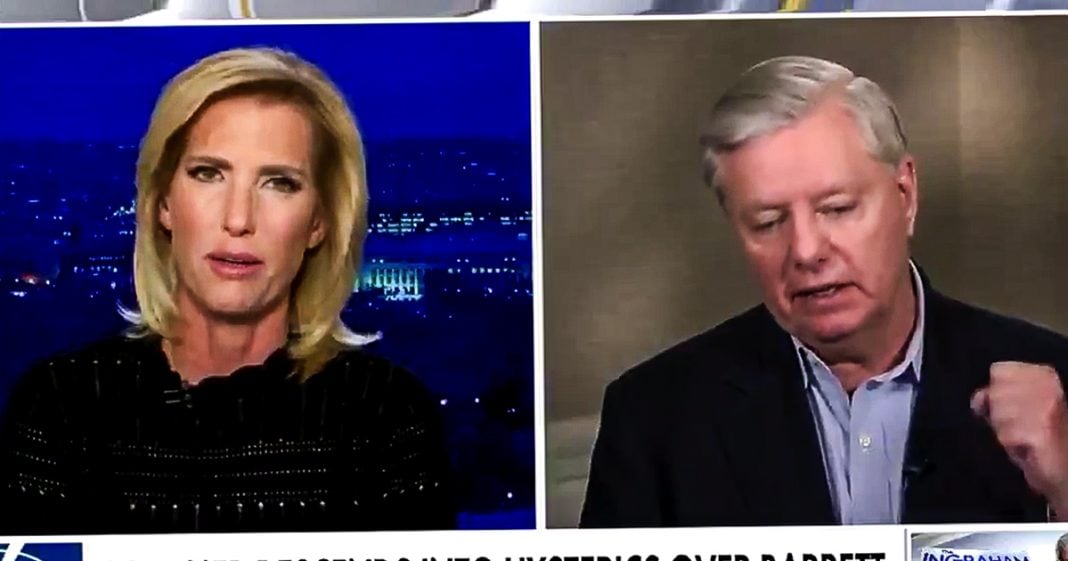 During a Fox News interview on Wednesday, Republican Senator Lindsey Graham was once again giving his sob story about running out of money and time, and apparently Fox was tired of the shtick and ended up just cutting his audio and the segment while Graham was in the middle of his sales pitch. And even if it was an accident, they just kept right on rolling without apologizing or acknowledging what happened. Ring of Fire’s Farron Cousins discusses this.

Lindsey Graham is not done with his Senate race, no matter how bad things may look, no matter how much he’s getting outraised by his opponents, Lindsey, Graham is not throwing in the towel. He is not admitting defeat and he is still out there begging for more money. And yesterday he got to beg for more money on Fox news. But unfortunately, Fox news just didn’t have time to hear about it. Maybe they’re sick of his whining. Maybe they’re sick of him in general. Maybe they just don’t feel this is the best place to do your little campaign pitch. But whatever way, uh, yesterday Fox news actually cut off Lindsey Graham in the middle of him trying to do his little sales pitch to get more money for the last few days of this campaign, take a look at what happened.

Now, a lot of people who’ve seen this and this was my initial reaction to it was okay. Look, they were already, they had already had the graphics queued up, uh, probably, you know, in the system and punched in like, get ready. The system counts it down. Once that happens, you can’t stop it. Um, so that graphic that cut him off in the noise, you know, the harsh, whatever noise it was, uh, and the prompter switching for Laura Ingram, that was all automated. You couldn’t stop it. So they weren’t actually cutting off Lindsey Graham. I do to a degree believe that that is what happened. Obviously. Um, if Fox news uses the system that a lot of other places use this, I don’t know their system. So I can’t say for certain that’s what happened now. Uh, here’s the thing though. Laura Ingram absolutely could have been like, Oh, sorry, Lindsay. Uh, didn’t mean to cut you off, but anyway, moving on. But she didn’t, she didn’t acknowledge. So that’s what tells me that even if it was an accident, they still didn’t care. They didn’t care enough to be like, Oh, sorry, Lindsey. Oh yeah. You were still talking. Yeah. Uh, by the way, the website’s Lindsey graham.dot net or whatever it was, um, they could have, that is something they absolutely could have done, but they didn’t.

So that to me speaks volumes. I think what we’re seeing right now is Fox news much like the rest of the country understands next Tuesday is not going to be good for Republicans. There’s a decent chance. They still retain the white house. There’s a decent chance. They still retain the Senate. But in order to do those things, it’s most likely going to have to come down to a lot of voter suppression, possibly even cases that immediately go straight to the U S Supreme court. It’s not going to be a pretty fight. If Republicans hang on to power. The other side of that is there’s no fighting because Democrats receive a decisive victory. So see what I mean? Like there’s no good outcome really for Republicans next week. And Lindsey Graham is one of those. I do however, have to issue a word of caution. There are polls in Louisiana, not Louisiana, South Carolina right now showing that Lindsey Graham is still winning by like eight or nine points.

Some polls sure. Show that it is a dead heat. There was one poll, uh, that everybody’s citing. But that was actually from three weeks ago that says that Jamie Harrison was up by one point. I would love for Jamie Harrison to kick Lindsay Graham out of the Senate. I would love that I would love nothing more than that. Uh, he raised 57 million in the third quarter of this year, which is phenomenal, but I’m afraid this is Beto 2.0 Beto versus Ted Cruz. Beto got a lot of outside support, a lot of outside money, but it didn’t translate into enough support in the state of Texas to beat the much hated Ted Cruz. And I’m afraid that Jamie Harrison could be headed down that same path. Math people hate Lindsey Graham side of South Carolina inside South Carolina. He’s not that hated fact support for him. Went up during this Supreme court fight. The people of South Carolina have not stopped being very conservative. So as great as it would be to get Lindsey Graham out of office, as awesome as it is to watch him whine like a little baby about wanting more money. I am afraid and I hate to be, you know, the bearer of bad news. I am afraid Lindsey Graham is headed for another six year term.