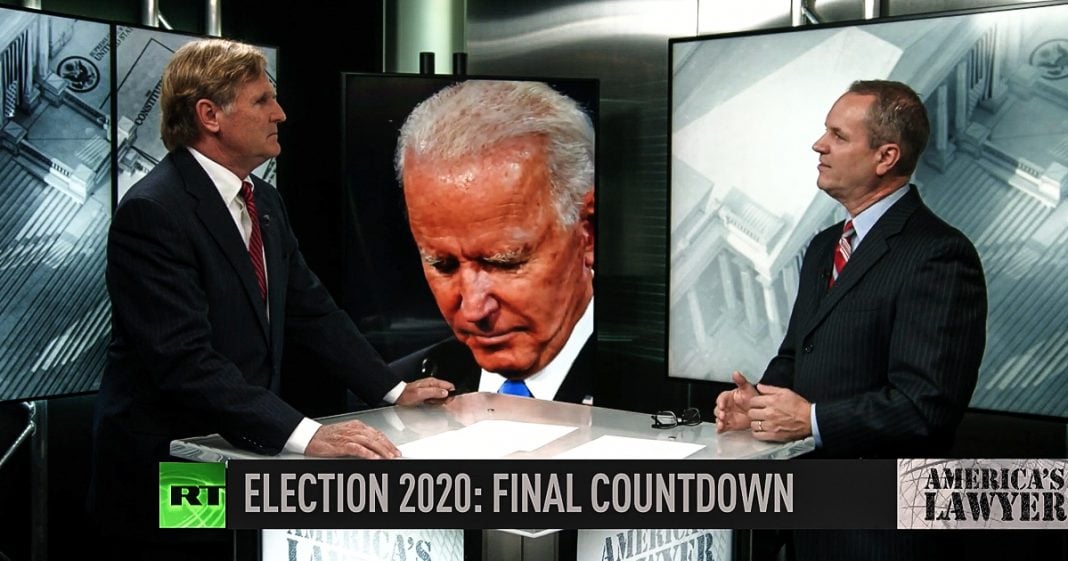 Via America’s Lawyer: Media analyst David Lamb joins Mike Papantonio to break down the final poll numbers from record rates of early voting as we enter the final stretch before next week’s election.

Mike Papantonio:             There’s less than one week to go before the 2020 election and we’re seeing record numbers of early voters, especially among battleground state voters. What are the final polls saying and what do they mean for this election coming up? David, let me ask you, I’ve got David Lamb with me. Of course, he’s been a regular on this show talking about the polling, break it down. National polls, state polls. Everybody gets, you know, they, they don’t understand that the state polls really matter. That the battleground states really do matter.

David Lamb:                         Yeah. That, that’s where the race is going to be won and loss. It’s hard, as I stand here, here we are a week out and this may give some Democrat voters PTSD to four years ago, but it’s hard to imagine a path where we do not have a new president because the, the, the, the hole is deep for Trump to have to dig out of. He is making headway. Now in the past, he’s lost a point, Biden has lost a point every week now going on three weeks. So, but the, the deal with that is it’s gone from 10 to nine to eight. So Trump is running out of time. Nationally, the lead is right around eight points right now.

David Lamb:                         Yeah. So Trump won some States that, a blue wall, there was supposed to be a blue wall in the Michigan and Minnesota, Pennsylvania, Ohio, you know, that middle section of the state, that Trump won those States. So, so Clinton did do well there, but not nearly though, Pap, to the numbers of what Biden is. I mean, some of these numbers, in Michigan Biden has an eight point lead. Minnesota, a seven point lead. Trump has a narrow lead in Ohio. Biden has a six point lead in, in Wisconsin, much larger than Clinton was ever able to get.

Mike Papantonio:             Okay. So, so these people who went to bed during the, during the Clinton Trump race and woke up and said, oh my God, what just happened?

Mike Papantonio:             Well, talk about that a little bit. They are pretty spectacular and you go, but does that really mean anything this late in the game? Don’t you?

David Lamb:                         Yeah, he really is running out of time. I mean, the fact of the matter is Trump has run a terrible campaign. Trump has been stuck at 40, 42%. That’s what got him elected. He has not expanded that base at all and that goes against all the conventional wisdom of politics. You have to grow your base. You have to go beyond those, those folks who love Trump and the evangelical base, but he has lost with seniors. He’s lost with those, you know, suburban women and all so many different groups.

Mike Papantonio:             Is there any truth to the fact that he’s also losing with elderly kind of voters? I mean, you hear two sides of that argument.

Mike Papantonio:             I mean, so you go through all the demographics, African-Americans, he’s made inroads.

Mike Papantonio:             Elderly, I still think is an issue certainly in places like Florida and Arizona.

Mike Papantonio:             How would ever, yeah, how would we ever even regard polling as being significant?

Mike Papantonio:             Are we seeing any movement from the rallies, even? I mean, it seems like a desperate, desperate effort.

David Lamb:                         But you know what’s different about this election and four years ago and, and this goes to your conversation with Farron, in 2016, all of those rallies were carried live. Do you remember that? They were live on CNN and live on Fox and everywhere. Now really they’re only live on Fox. So they’re not carried as much as they were, but the crowds are, they, they are massive. And, and something has to be said for that. I wonder though, is it excitement or is this a Trump farewell tour and folks want to.

David Lamb:                         So there were 120 million votes cast in 2016. By the end of this week, there will have been 80 million votes cast early. So depending on the turnout, it’s going to be some historic numbers. You are seeing some real surges in African-American voters and the millennial voters who traditionally, oftentimes have not turned out as much. There, there are signals and signs that those two bases and some of those bases that really have to turn out for Biden are showing up. The question that’s out there is, you know, Trump has kind of been anti the whole, you know, the whole COVID thing is the conspiracy. Are, are the Trump voters waiting until election day? And will they be so jazzed in any of this?