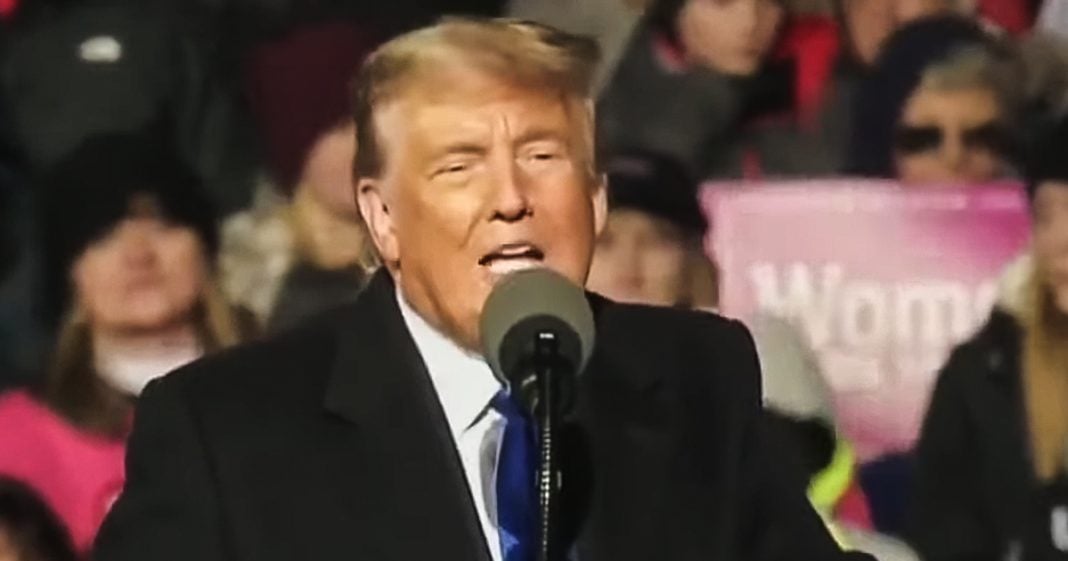 The Trump campaign has made the decision to pull their ads from Florida in order to free up enough cash to make a final ad blitz in states they had abandoned long ago – Ohio, Wisconsin, Pennsylvania, and others. They don’t have the money to keep all of the states in play, and that’s because they have been so horrible with spending this year. Ring of Fire’s Farron Cousins explains what’s happening.

Donald Trump is so low on cash for his reelection campaign that he is now having to pull ads out of the massively important swing state of Florida. That by the way, is still in a statistical tie, but he’s having to pull ads out of Florida so he can have that money back. So that in the final six, seven days before the election, he can start running ads in States. He had previously pulled out of because he didn’t have enough money. Uh, he is going to re up his ad campaigns in Ohio, Pennsylvania, Wisconsin, uh, possibly Minnesota was on one of the lists I saw, but either way, he’s going back to the rust belt because he is getting slaughtered there. A new poll that actually came out this morning says that Trump is losing to Biden by 17 points in Wisconsin. In fact, he’s losing the Biden in Pennsylvania is losing by a huge margin in Minnesota.

And he’s beating Biden by one point in Ohio, which again, within the margin of error. So that is a statistical. Hi, and here’s the thing last night when this news came out, a lot of people said, well, it’s cause he’s already locked up Florida. Trump’s got Florida. All Republicans are catching up in early voting. Republicans are down as of yesterday, including yesterday’s big Republican turnout day. Republicans are down 300,000 to Democrats in early voting numbers. Uh, there hasn’t been an election in Florida. That’s been decided by more than 300,000 votes in a long time. No Democrats are doing very well. They do not have it in the bag. Donald Trump is depending on which poll you’re looking at, pulling ahead of Joe Biden and Joe Biden is depending on which poll you’re looking at in Florida pulling ahead of Trump. It is a statistical tie. Trump does not have Florida locked up and by all counts on the early voting numbers, Trump is not doing very well.

So is it that Trump thinks he has Florida locked up and he can pull money out and go to the rust belt or is he giving up on Florida thinking he can make up for that loss in the rust belt, uh, to two presidents have won the presidency without winning the state of Florida. This is vital. Biden has a clear path to victory, by the way, without the state of Florida, Donald Trump does not. Trump has no path to the white house that doesn’t run through Florida Biden does because he holds the rust belt. So that’s the situation we’re looking at now, but we can’t lose sight of the bigger picture, right? The bigger picture is the fact that Trump’s campaign blew through billion dollars in nine months because they’ve been pulling ads from swing States for almost two months now. So they actually blew through a billion dollars in, would it be seven months?

And we know a lot of it is allegedly, uh, because Brad Parscale was, you know, paying himself big bucks. Uh, we know that they’re paying Trump Jr’s girlfriend a hundred thousand or more a year to go out there and scream at people and terrify them and to basically become a meme. Uh, we know that Laura Trump, uh, is getting paid big bucks to she’s making the same as Kimberly Guilfoyle. For some reason, they’re paying themselves exorbitant amounts of money. They’re spending the money at their own businesses. So they’re using all this money to just put it back in their own pockets, which, Hey, it’s your money? You know, as long as you’re not legitimately stealing it, which the Parscale investigation will tell us if that’s the case, you then sure do whatever you want, but just don’t expect to win. Problem is this guy ran his campaign the same way he ran his businesses and just like with his other businesses, he bankrupted it. There’s no money left. There’s nothing there. And that’s why this campaign is failing, pulling out of Florida seven days before the election is a very risky gamble. And if Trump’s history in Atlantic city is Indiana Decatur. Guy’s not so good at gambling.