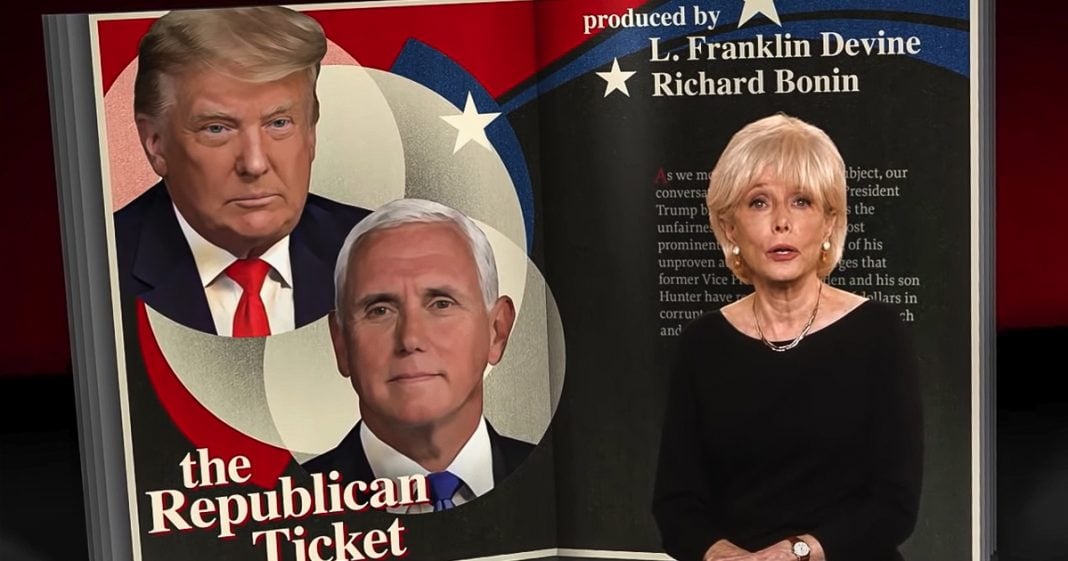 60 Minutes reporter Lesley Stahl has reportedly had to take on a security detail to help her after all of the threats she has received from angry Trump fans following her interview with him (and the other candidates) this past weekend. Trump made a big deal about the interview before it aired, releasing a clip of himself getting annoyed and leaving the interview early because she was asking tough questions. Ring of Fire’s Farron Cousins discusses this.

This past Sunday, the, uh, infamous 60 minutes interview aired. Leslie stall talked to Donald Trump, Mike Pence, Joe Biden, Kamala Harris. And even the week before the interview aired, we were hearing about how, how intense it was. And Donald Trump was the one who, you know, kept that alive before the interview air said it was unfair, threatened to release their own unedited version of what happened. And he did end up releasing it and it showed Donald Trump getting mad because Leslie stall had the audacity to warn him that, Hey, uh, there’s going to be some tough questions here, just so you know, like this is not going to be a walk in the park. This is not going to be a softball interview. I got questions. The public has questions. We’re going to ask the questions. We’re going to get some answers. And, uh, she didn’t even say it that rudely.

She didn’t say it rudely at all, but Trump perceives anything. That’s difficult for him to be rude, to be a personal attack on him. If it’s not. Absolutely just the most flattering thing on the planet. It is a downright attack on Donald Trump and everything that he stands for. And so Leslie stall, after essentially a week of Donald Trump, going after her saying she was ridiculous saying she was partisan saying she was a hack has now had to take on a security detail because she continues to get death threats from the Donald Trump superstar fans, her family only members, the ones that don’t even live with her have also been given security detail at their homes because they are also getting threatened by the Trump supporter.

This to me is one of the biggest reasons why Donald Trump, it has to go as somebody who’s received similar, you know, somebody who, who has had to go through the extra security detail. And from what I know from other progressive hosts, they have as well. We’ve had conversations about this in private, because this happens to a lot of us frequently from the crazy Trump people. This to me is regional and enough to make, make sure that my vote gets counted against Donald Trump. I’ve been attacked by a lot of people online recently for allegedly not being left enough because I’m voting for Biden instead of voting third party, I’m voting for Biden cause he has the best shot at beating Donald Trump. And I need these Trump supporters to lose their source of power, which has Trump in the white house.

So that maybe I don’t have to continue hiring private investigators to track down phone numbers and see where these people are and see if they actually pose a threat to me. I don’t know, maybe I’m being selfish in that way, but I don’t want to get it murdered. This is what we’re up against folks. This isn’t a joke. This isn’t hyperbole. These are things that are happening and it’s not just me. It’s a lot of other progressive hosts out there. I’d be surprised if any, one of them hadn’t had to go through extra security steps in the last few years having to cover this stuff and, you know, pissing off Trump supporters by telling the truth, Leslie stalls going through it. CNN has gone through it. MSNBC reporters have gone through it. We’re all going through it. Okay.

And again to me, and maybe it’s just cause, you know, I, I do have dog in the fight. Uh, yeah, I’m gonna make sure that my vote gets counted against Donald Trump, not just for me, but for everybody else in this industry. And for so many other reasons too, but I’m going to put, not getting murdered right at the top of my list. His supporters are unhinged. Not all of them, no, not by any stretch of the imagination, but there are enough of them out there that they pose a significant threat to many of our lives. And if we can take away their source of power, they’re not going to feel as empowered to go out there and attempt to commit these atrocities, like what they’re threatening to do right now.