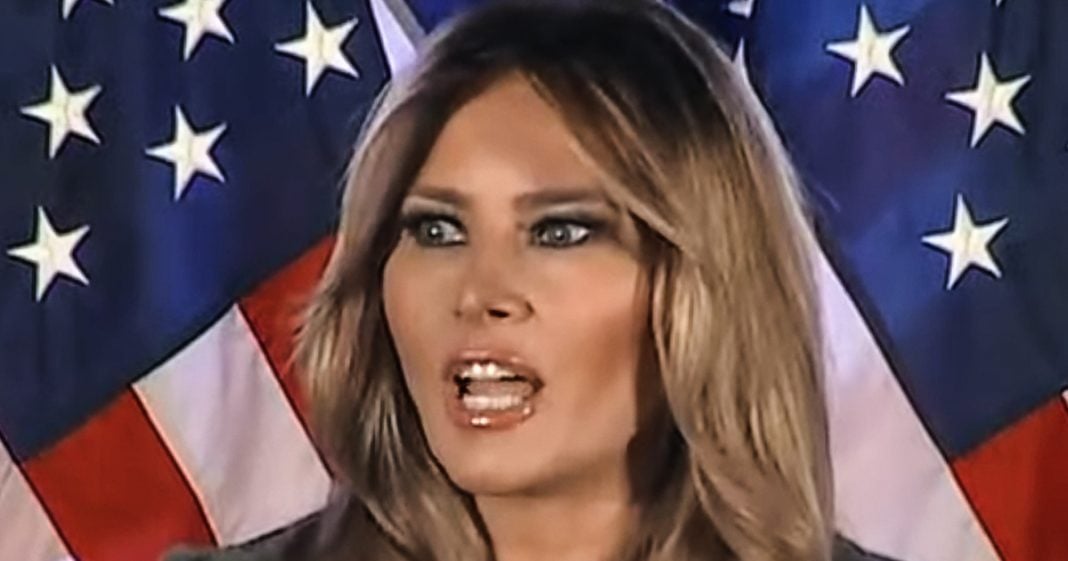 During a campaign stop on Tuesday, Melania Trump actually blamed DEMOCRATS for the divisiveness in this country and said that they are bad influences for their children. Ironically, this speech was happening as a federal court handed down a ruling that her husband can’t escape a defamation lawsuit against him, highlighting the hypocrisy of the most evil First Lady of our lifetimes. Ring of Fire’s Farron Cousins discusses this.

Yesterday, Melania Trump emerged once again in the public eye to remind us what an aborad, horrible human being she truly is, um, yesterday during a stump speech, because yes, they’ve sent Melanie out there to, to give speeches. They think that’s somehow going to attract more people. Uh, she said, uh, children watching and learning about politics in our country deserve a better display of political responsibility. At first first hearing that common you’re like, Oh wow, is she out there campaigning for Biden? Because that sounds like a pretty serious dig at Donald Trump. But then she continued. So the Democrats or dividing our country, it’s the Democrats. And she thinks the Democrats are the ones who are a bad influence for our children. Huh? The woman who we just heard the tapes about a month ago, maybe it wasn’t even that long ago. It’s hard to keep track of time.

In 2020, uh, where she was angry, that people were talking about the kids in cages. She was pissed off that she had to decorate for Christmas. And she has the audacity to say that it’s the Democrats that are divisive and bad for children, that you are literally bad for children. And you said, give me a fucking break. Right? That’s your exact quote from the tape that we all heard. Cause you didn’t care about the kids and you wore the jacket that said you didn’t care about the kids. And we know you don’t care about the kids, but now you’re out there saying my God, won’t somebody think of the kids. These poor kids are out here listening to these divisive Democrats. Instead of listening to my husband, as he goes on Twitter and insults Joe Biden, insults Joe Biden’s son and salts, his fellow Republicans and salts members of the media, uh, insults anyone and everyone with some of the most God awful, disgusting insults. You could imagine. Oh, and let’s not forget the access Hollywood tape too. Right? Because that’s, that’s not at all bad for children. Isn’t Milan. Yeah.

When you’re rich and powerful, they let you do it. He wants your kids listen that you want Barron to grow up. Be that kind of person I’m going to be interested to see how long Melania stays with this guy. After he leaves the white house. There, there is no way she rides this thing out until he’s in the grave. No way, no way at all. She is going to stay with him until then. Like I know she is evil and she deserves him because she is just as horrible. She’s a birther. She’s got that little racist streak running through her as well. Uh, she she’s a liar like him. These statements Chester is absolutely ridiculous. There is divisiveness in this country. Absolutely. But if you watch the political ads today, especially, uh, I know I bring up a lot, but that’s because we’re in their TV viewing area.

The see the ones from Alabama, you got Tommy Tuberville going out there saying that Doug Jones is going to use your tax dollars to pay for abortions. Say he is the most radical socialist in the Senate. Like these are flat out lies, but that’s what Republicans do in their ads. Joe, Biden’s putting out ads of people holding hands and hugging and saying, can’t we just get along. And Democrats are literally running on the opposite of devices near divisiveness. Now I think that’s weak. By the way, I want to see them out there hitting hard on policy. But the divisiveness in this country is not coming from the Democrats. The divisiveness is coming from Republicans. Why? Because they want to take rights away from people. You’re right to not get shot in the face by a police officer they’re side with the police on that.