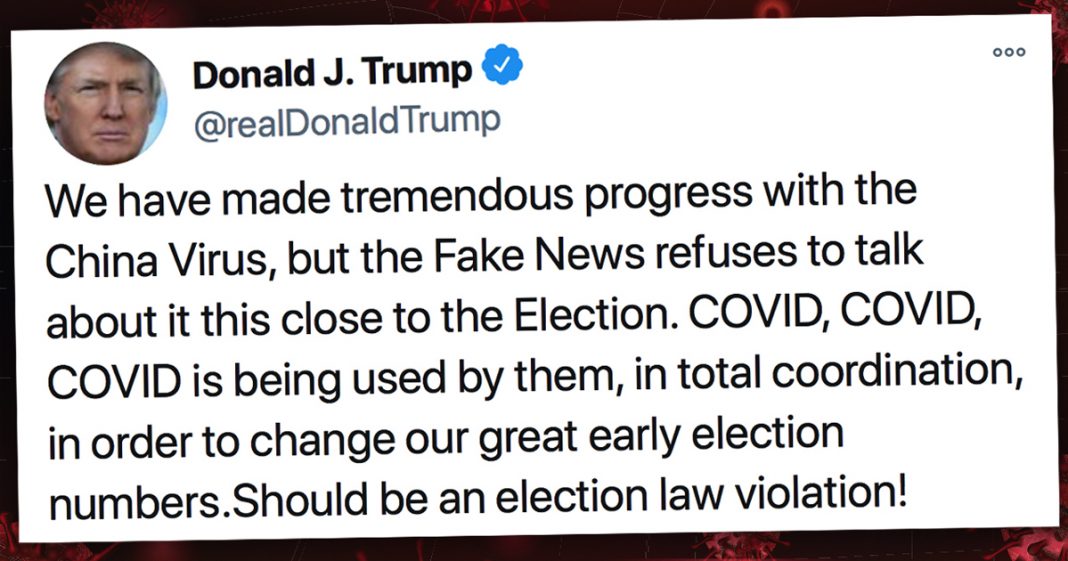 A desperate Donald Trump lashed out at the media on Monday, accusing them of trying to interfere in the Presidential election. Their crime? Talking about his record on the pandemic. Donnie needs to realize that records speak volumes, and his record on this (and so many issues) is absolutely atrocious. This also gives us a glimpse into what an untethered Trump might do if he wins a second term. Ring of Fire’s Farron Cousins discusses this.

On Monday morning, Donald Trump lashed out at the media in one final desperate attempt to appeal to his rabid base a week before the election. And what he told his base was that it should be illegal for the corporate media to talk about COVID. Here’s what he said. We have made tremendous progress with the China virus, but the fake news refuses to talk about it. This close to the election COVID COVID COVID is being used by them in total coordination, in order to change our great early election numbers should be an election law violation. Holy crap, everything you just said was a lie. I mean like every little sentence fragment in there was an absolute lie and it’s an all a verifiable lie. We’re making great progress with the virus. Really. Friday was the highest day in total. Number of new COVID cases we’ve ever had.

Saturday was the second highest day. No things are getting worse, not better. Uh, then, uh, total coordination G total coordination. Imagine that all the media outlets talking about the biggest story of the year nonstop, that’s not coordination. That’s news that that’s what the news is supposed to do. Uh, what’s the next one, uh, in order to change our great early election numbers, um, all your numbers are bad. The early voting totals are bad for you. The poll numbers are bad for you. Everything for you is bad and no reporting on the news. If that changes the way people vote, uh, that’s a good thing that that means they’re starting to pay attention. You see this isn’t an election law violation as you would like it to be. And I know you didn’t say it was, but you said it should be, which means you think it should be illegal for the media to cover the news of the day.

If that news of the day isn’t flattering to the president, this is an election. Every issue matters, including the issue of how horribly you have handed handled the COVID-19 pandemic. And that is what is weighing the most heavily on most people’s minds as they head to the polls, you know, as they sit for hours in those lines, six feet apart from the person in front of them and the one behind them having to wear a mask in the heat. Yeah, I’m pretty sure they’re reminded through that whole. Wait, why we’re still in this situation today, you’ve done nothing. And your chief of staff, Mark Meadows admitted on Sunday, y’all have given up, you’ve done. You’re not even going to try to contain it anymore. All you’re hoping for is that most people who catch it don’t die from it. That that’s your plan, catch it, but don’t die from it. And then hopefully don’t bankrupt yourself with the medical bills that you’re going to get as a result of this, that that’s the Republican plan.

Here’s the thing. People we’re going to the polls right now. And they’re pissed off about the pandemic. They’re terrified about the pandemic and they have every right to feel those emotions, anger, fear, it’s all fully justified because the federal government has not come down with a single, not one policy effecting all Americans, not a single one. We have had to put together a patchwork of state by state regulations and orders and mandates and suggestions, but nothing from the federal government saying, all right, listen, you go outside your house. Everybody has to wear a mask. That’s the rule for one month. Suck it up, deal with it. We’re going to get over this. You won’t be fine. Mandating quarantines. Nope, Nope. This, this, this, he deserves what’s happening. Let me put it that way. He deserves what’s happening to him in the polls, but to suggest for a second that any of this should be illegal covering the news of the day should be illegal folks.

This gives you a little bit of insight into what could possibly happen. Should this crazy person win a second term in office. He wants to criminalize the news of the day when it’s not flattering to him. That alone is reason enough to not vote for him, to give him another four years in office. That’s the kind of thing he would pursue and sure the constitution forbids that, but the constitution has also forbidden a lot of things that Trump has done and seemingly has gotten away with. So why wouldn’t he continue to push the limits when he already knows nobody except maybe the voters are going to hold them accountable.