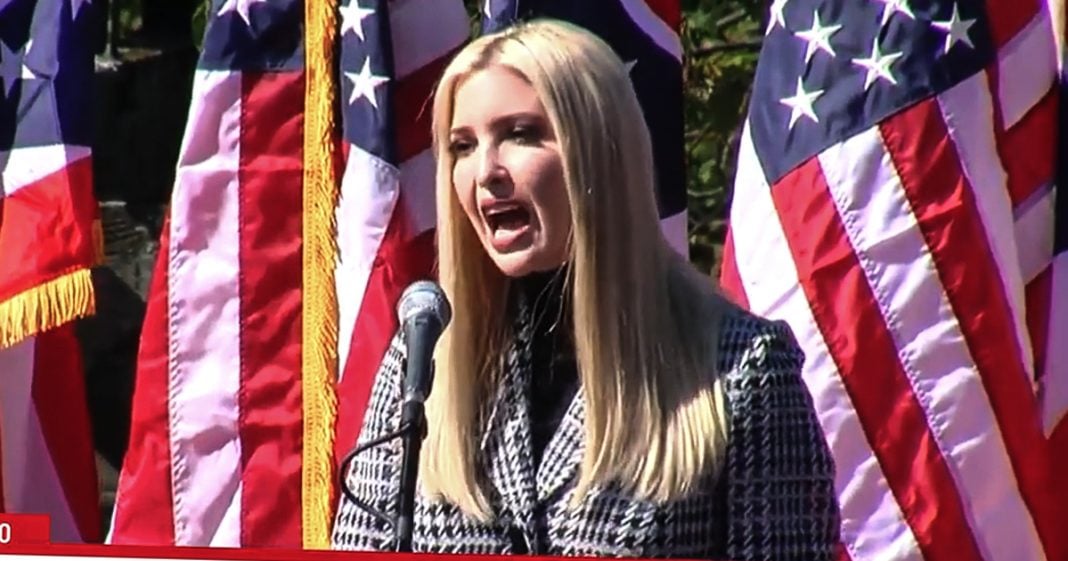 The Trump campaign has made a lot of pitches to suburban women, but so far none of them have landed. So the campaign is sending out Ivanka Trump to try to win over middle class women – the demographic that pushed Trump to an electoral victory in 2016. But this demographic is far more concerned with kitchen table issues, and Trump soundly dismissed those issues in last week’s debate. Ring of Fire’s Farron Cousins explains what’s happening.

The Trump campaign understands that their numbers right now are dismal. We’re a week out from the election. They don’t have a leg to stand on. They’re losing nearly every single demographic swing States are going towards Biden. It’s looking like an electoral landslide for Biden right now. So the Trump campaign is in damaged mode. They’re in a panic mode. So they’ve decided that their best course of action. And they’ve been doing this for about a week now is to send out Ivanka Trump to put, uh, a humanizing touch to the otherwise ghoulish Donald. So they’ve been sending a vodka out to these Midwest States just to have small talk, to try to win over as the campaign puts it suburban women, you know, the suburban women that Donald Trump has been trying to terrify for months. You know, he’s been saying, Hey, uh, if you elect like Joe Biden, Antifa is going to be marching down your street and you don’t want that in your suburbs.

Do you? They’re they’re going to do it. I promise you they’re going to do it well, that didn’t stick. In fact, at this point, most people have forgotten that that was even a thing. And then of course, he told them that, Hey, look, I prevented black people from moving into your neighborhood, right? So, Oh God, that, that was even worse. That was even worse. Cause that was hugely racist. So that didn’t resonate with the suburban voters. And so they said, you know what, maybe let’s not have this guy try to reach out to them. What if we send someone who’s like them? What if we dehumanize them down to just their genitalia and say, look, you’re a woman. Here is a woman. Obviously that means Trump is good. Can we fool you now, folks, that is exactly what’s happening. I mean, some of the stuff they’ve had Ivanka going out there doing, uh, at a recent event in suburban Milwaukee, Wisconsin, uh, Ivanka was deployed to make small talk about ice cream.

Some presidential historians are skeptical of this strategy. They’re skeptical that it will help Trump. Um, on the one hand, the president’s family member can offer a softening and humanizing touch. She’s trying to be some port in the storm. Uh, however, the Ivanka style becomes almost a counter campaign rather than a supporting one. And that’s the key because if you’re going to send somebody out there to bolster your candidate, they have to have, you know, congruent messages. And if those messages don’t jive well together, then it’s a separate campaign. Ivanka is out there trying to put a human face on something that doesn’t actually exist. We all know who Donald Trump is. Something like this absolutely could have worked in 2016. And in fact it did Ivanka. Trump did a very good job of going out there trying to convince people, Hey, he’s not all that bad.

And even if he is all that bad, I’m going to be there and I’m going to help you on LGBTQ issues. I’m going to help you on climate change. So don’t worry I’m there. Or for you. We’ve had four years of that. The Mark has done nothing. Ivanka has just been a face that occasionally appears to do something that makes everybody wonder, why are you in this white house? You have no business being here, please get out. We don’t want to see you anymore. And that is what they’re projecting onto the American people right now. Ivanka is out there trying to tell people that our dad’s not that bad, but in order to convince them of that, she has to convince them to forget the last four years ever happened. And with only a week left to go, I’m not so sure that’s going to be a winning strategy.